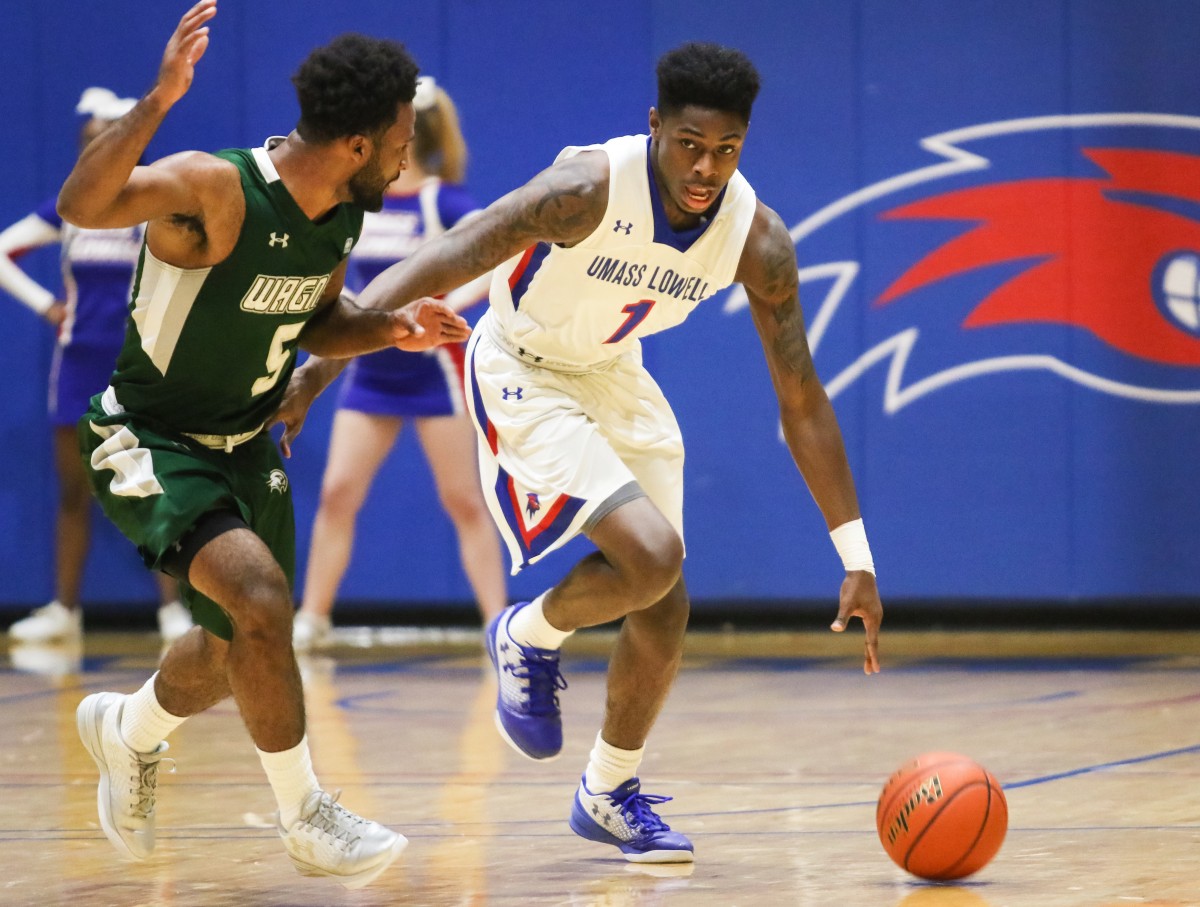 The UMass Lowell men’s basketball team took its first victory of the season with a nail-biter against Wagner University. The cat-and-mouse game had both teams score 50 points in the second half to battle to an 87-76 win.

“Wagner’s a very good team. Most people know they knocked off UConn on Friday. They also won 23 games last year and won their conference, so this was a really, really good win for us,” said head coach Pat Duquette.

The most that Wagner ever led by in the game was three points, while in the second half UMass Lowell commandeered a 16-point lead over its opponent.

Free throws were crucial in the game during its tightest spots. UMass Lowell made 32 out of 36 free throws, making 10 out of 10 in the first half.

Both junior guard Matt Harris and sophomore guard Isaac White were perfect on the free throw. Harris made 13 out of 13 shots, and White scored a perfect 10 free throws.

White played 37 minutes, the most out of any River Hawk. He made two out of five three-point attempts and had three assists, finishing with 20 points. He was named the Star of the Game for his performance.

The game started off slow for the River Hawks, where they allowed Wagner to take control of play. On defense, the River Hawks left perhaps a little too much room, which gave Wagner the chance to stake out an early lead.

After gaining their footing in their home court, however, the River Hawks started to turn on the scoring.

Two straight three-pointers by senior forward Tyler Livingston and Harris lifted the River Hawks to a point where they could begin to shut the door on the Seahawks midway through the first half.

For a stretch in the first, Wagner went several minutes without scoring a point.

The River Hawks spent much of the latter half of the first half building up a point cushion that would take them into the locker room with a 37-26 lead. They continued the momentum into the second half, scoring point after point, up 51-37 after a series of good plays.

But by the time that 10 minutes had passed in the second half Wagner came within seven points of the River Hawks. This was partly due in part to UMass Lowell committing seven fouls in the first seven minutes, which seemed to light a small flame under the belly of the Seahawks.

The lead was a lot less comfortable.

The River Hawks kept Wagner at bay by increasing their offensive presence and taking points on free throws.

UMass Lowell showed a willingness to shoot under pressure throughout the game. Harris, in particular, pulled off a spectacular under-the-net shot that assisted the River Hawks in mending their lead in the waning minutes of the second half.

The team also worked well as a unit, making good passes and maneuvering successfully. “When you’re playing together as a team, and communicating well with each other and being disciplined… the game is a lot easier,” said redshirt junior guard/forward Jahad Thomas.

The River Hawks led by 10 with five minutes remaining in the second half. Points came and went, with scoring mostly back-and-forth so that the lead remained just about constant.

The River Hawks advanced to a 1-1 record with the nonconference win.

The River Hawks will hit the road for the Indiana Classic, where they will play Indiana, Fort Wayne, Liberty and Mississippi Valley State. The team will roll back into Lowell for a contest at the Tsongas Center on Saturday, Nov. 26 against LIU Brooklyn.