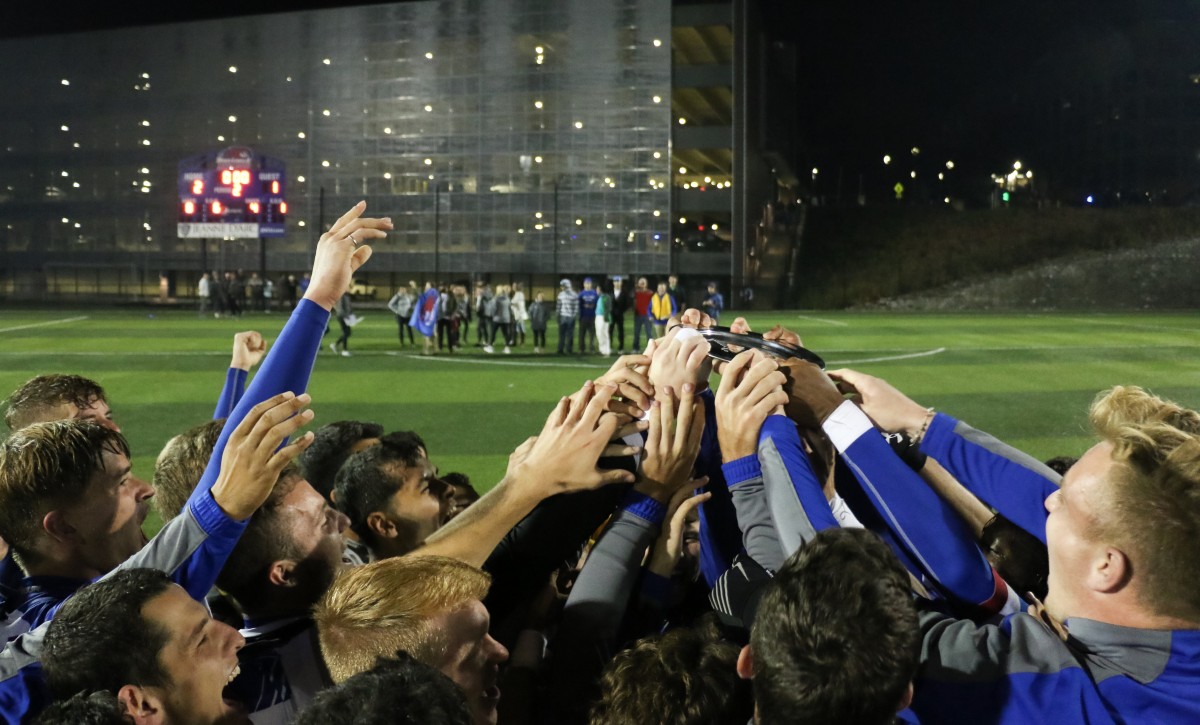 In his final game as a River Hawk, senior forward Wuilito Fernandes powered the team to a 2-1 win and their first-ever America East regular season championship with his game-winning goal over the Hartford Hawks assisted by redshirt freshman forward Ivan Abramovic Wednesday night at Cushing Field.

On a night where Fernandes could have had four goals, he only needed one. Fernandes hit the crossbar on a header as well as rocketing a shot off the right post.

The Abramovic-Fernandes one two punch worked like it has all season, as Abramovic assisted Fernandes’ goal and almost put one of his own in off of a Fernandes pass.

“I saw a player [Fernandes] who knew he was playing in his last home game, and he knew what this game meant… He’s really taken a leadership role and really wanted to win this game for no one else but his teammates,” said head coach Christian Figueroa.

Strong midfield presence was a highlight of this game as the River Hawks controlled the pace of play throughout.

Possession was clearly in favor of the home team as they worked the ball from midfield to defense and back waiting patiently to strike. The Hartford Hawks had their energy dwindled as they chased the ball around the pitch.

“The guys have bought into [the system] all year long. Today was no different knowing Hartford would come out hard… We just had to stick what we have been doing and we knew we could win the game,” said Figueroa.

Four seniors played in their last game for the River Hawks: Mauricio Escobar, Eric Martin, Carlos Ruiz, and Fernandes. They were the first players to complete four years at the Division I level for UMass Lowell. The team had great contributions from the seniors, with Ruiz starting 14 out of 15 games and Martin starting all 15 prior to Wednesday.

“The stuff they leave behind on the field is evident, they won the first regular season D-I championship for this school… But what they give you off the field is unmatched right now… We’ll learn from those guys… Thankful for what those guys gave us these four years. They’ve bled for this program and worked hard for it,” said Figueroa.

The River Hawks capped off an impressive season with a 13-1-2 overall record and a 5-1-1 mark in America East play.

Unfortunately, they will be unable to compete in conference and NCAA postseason play this season, due to their four-year transition period to Division I which concludes this academic year.

“You’d like to see what this group could do in postseason play… I feel confident in saying we would have a very good chance in making it into the NCAA tournament this year if we were eligible, but it’s not in the cards. We understand that, we bought into it, but you can’t help but think what this team could accomplish,” said Figueroa.