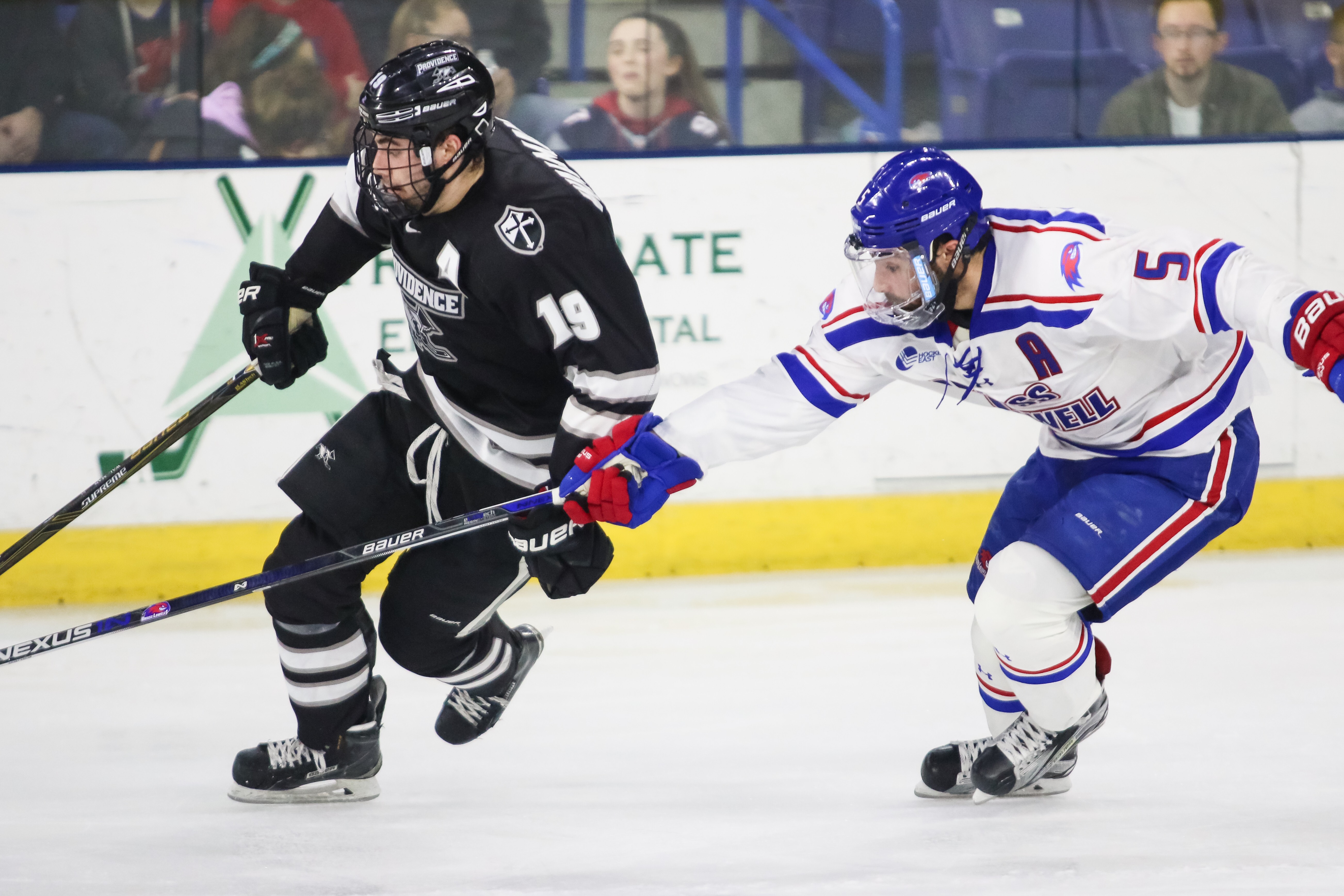 Despite a strong start for the River Hawks, the Providence College Friars came back with an aggressive third period to secure the 3-4 win in a hard-fought Hockey East battle.

The loss snapped a seven-game win streak for the River Hawks, and was the first time the two teams have met since the Hockey East semifinal last year, in which the River Hawks pulled out a win after a grueling triple-overtime contest.

UMass Lowell had three different players score, including senior defenseman Dylan Zink who scored during a power play in the final period to give the River Hawks a chance by bringing the score to 4-3. But ultimately, it was not enough.

“It’s certainly not the result we were looking for. I liked the way we started, I liked the fact that we got up and got out of the gate pretty well and it didn’t go well from there,” UMass Lowell Head Coach Norm Bazin said.

Even with Providence winning the initial face-off, the River Hawks held most of the possession for the first period. UMass Lowell’s freshman forward Kenny Hausinger scored his fifth goal of the season with assists from freshman forward Ryan Lohin and junior defenseman Tommy Panico. Strong defense from both sides prevented either team from getting near the net following this goal.

After stealing the puck from the Friars, sophomore forward Ryan Dmowski did not hesitate as he scored for the River Hawks, skating right to the glass and pounding on it in order to celebrate with fans. This was also his fifth goal of the season, giving UMass Lowell a 2-0 lead.

After the second UMass Lowell goal, Providence stepped up their game and became more forceful in their defense and in offensive attacks. This led to the River Hawks increasing their efforts, which resulted in two penalties.

Sophomore forward Nick Master received a penalty for tripping and it was during this power play that the Friars were able to score their first goal. Sophomore Scott Conway scored his eighth goal of the season, assisted by Erik Foley.

UMass Lowell freshman goaltender Tyler Wall had many crucial saves throughout the game. He ended with 16 saves, 9 of which came in the second period. Providence goaltender Hayden Hawkey had 8 saves in the first period and would end the game with a total of 22.

The second period continued the intensity from the first, with far more penalties as a result. UMass Lowell’s junior defenseman Chris Forney received two within minutes of each other. The latter penalty allowed the Friars to score again off a power play. Vimal Sukumaran scored his 5th goal of the season, tying the game 2-2.

As opposed to the first period, the Friars seemed to hold more possession this time. The team had 9 shots in their 5 power play opportunities, while UMass Lowell was unable to shoot during their 3 power plays in the second period.

Despite the strong control, Providence also struggled with penalties, but only had three as opposed to the River Hawks’ five.

Wall continued to provide stellar defense for the River Hawks, including over 4 saves in the final 5 minutes of the period. The last minute saw multiple efforts from UMass Lowell to try and take the lead, but they were unsuccessful.

The final period continued with a lot of back and forth action, but no goals were scored until the eighth minute. Providence’s Kasper Bjorkqvist scored his second goal of the season, with assists from Brian Pinho and Jacob Bryson, to take the lead.

The Friars were able to quickly follow up with a goal from Vincent Desharnais, advancing their lead to a score of 2-4. The goal was disputed and reviewed by the referees, who ultimately determined it a good goal.

The River Hawks struggled to regain control and were unable to do so until the last few minutes. Dylan Zink sent a long slap shot into the net during a power play in the 13th minute to cut the Friar’s lead and make the score 3-4.

Although UMass Lowell continued their attempts to even the score, they were unsuccessful due to a strong defense by Providence.

The last minute of play interrupted momentum, due to frequent whistles by referees, which led to faceoff after faceoff in the UMass Lowell offensive zone.

The River Hawks will play at Providence tomorrow night, and will return to Lowell on Friday, Jan. 26 for another Hockey East matchup against Northeastern.