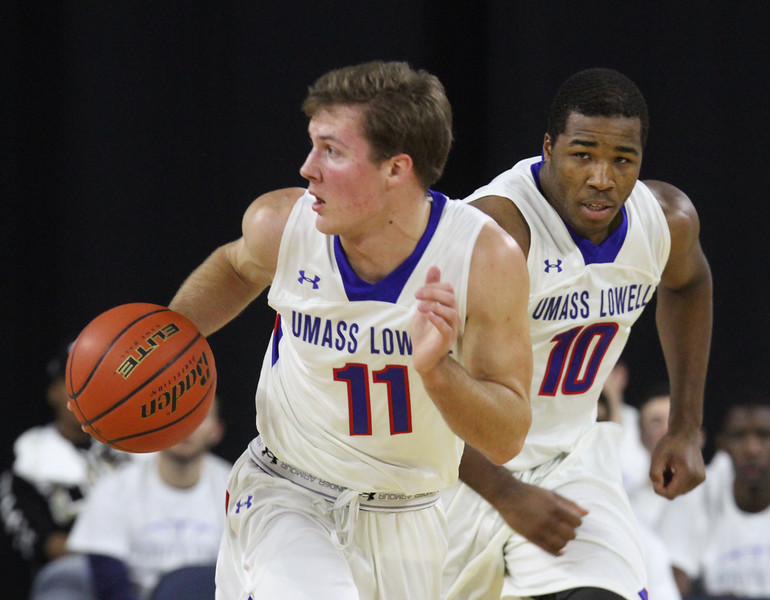 UMass Lowell looks to turn the corner next season with Isaac White and Jahad Thomas leading the charge. (Courtesy of Lowell Sun)

For most teams, injuries are something that sets a program back – but for a team that is not eligible for postseason play until next season, injuries can give a little extra time.

Finishing with an overall record of 11-20 and conference record of 5-11, the team ended up in sixth place in the America East Conference. Despite winning the least amount of conference games since the program transitioned into Division I three years ago, the future is bright for the men in the spindle city.

It is never a good thing to see an athlete go down due to injury, but the UMass Lowell men’s basketball team’s future could benefit from a couple of key injuries: those of redshirt sophomore guard/forward Josh Gantz and sophomore guard Isaac White.

These injuries gave the River Hawks’ young players valuable minutes for development and, more importantly, another year of White in the Division I era. White was redshirted by the team after suffering an injury 10 games into the season.

The absence of White gave freshman guard Rinardo Perry an unexpectedly high amount of minutes while Gantz’ injury opened up some time for freshmen forwards Stefan Borovac and Cameron Wolter.

Ryan Jones’ development was perhaps the biggest beneficiary of the early season injuries. Before White went down, Jones was averaging 8.7 points per game while shooting 42 percent from the field and 32 percent from beyond the arc.

After the injury, Jones averaged 15.4 points per game, shot 48 percent from the field and 44 percent from beyond the three-point line. He ended the season by hitting 31 of his last 61 attempts from long distance.

Jones plans on improving his game even more this offseason. “All around I can [be] better in pretty much every aspect,” he said. “I think the biggest thing is locking down defensively,” said Jones.

Although the youth of the team benefited greatly this year, the team was young and struggled on the road, and because of that they finished with a 2-14 record. With the only senior on the team being forward Tyler Livingston, the brunt of the leadership role fell on his shoulders.

“At times I think leadership comes where it is needed,” said Livingston, “I kind of just try to feel out when I need to say something or step in, but for the most part Jahad [Thomas] and I together have done a good job.”

Livingston also posted career-highs in several categories including 3-point percentage as he shot 46 percent from that range.

As the Division I transition ends, the young River Hawks squad need to improve on a few things – defense is a prime example.

UMass Lowell posted the worst points allowed per game in the conference letting their opponents average 81.2 points per game. A lot of that has to do with the absence of two key defensive players, White and Gantz.

The injuries were something that the River Hawks could not control, and coach Pat Duquette is notorious for preaching to control the things they can control. Being a perfect fit for a job, the River Hawk faithfuls have a lot to look forward to in the seasons to come.