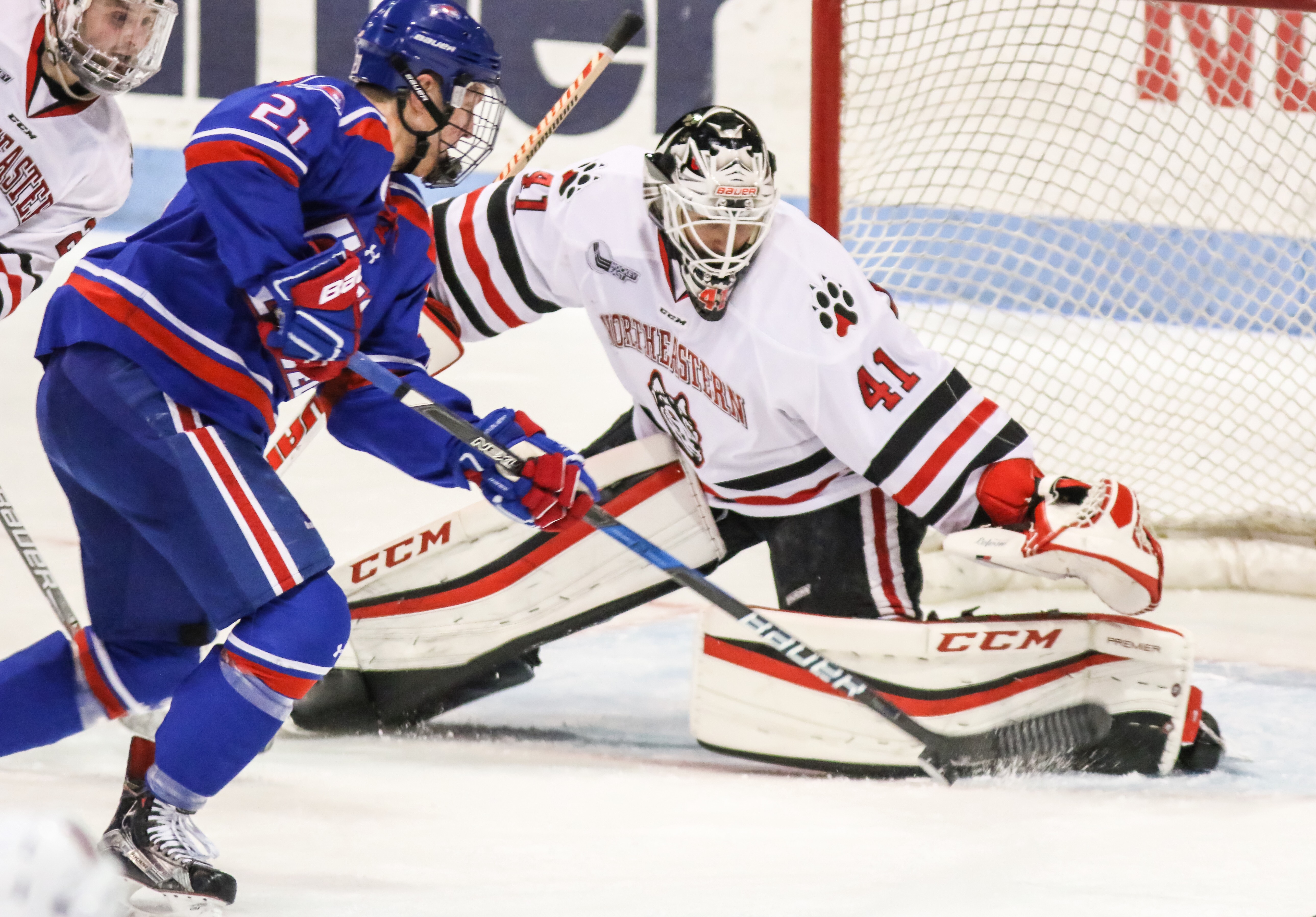 UMass Lowell broke their four-game losing streak with a  6-4 win at the Matthews Arena in Boston. The win earned the River Hawks a season split with the Northeastern University Huskies.

“It’s nice to be on the winning end for a change here. Our guys have worked hard; they’ve worked probably well enough to earn a few points last weekend but it didn’t happen. To get a few points tonight is a relief,” said UMass Lowell head coach Norm Bazin.

Sophomore forward Ryan Dmowski scored the game-winning goal at 14:11 in the third period to put the River Hawks back on top 5-4. Junior defenseman Tommy Panico’s tape-to-tape pass found Dmowski wide open in the slot, who then capitalized on the great shooting position.

The game was back and forth, with UMass Lowell outshooting Northeastern 26-24. Special teams were a large factor as the River Hawks went 1-2 and the Huskies went 2-3 on the power play.

UMass Lowell won the game but they started off slow, not recording a shot on goal until 14:49 of the first period. The Northeastern “Dog House” was sure to rub that in, sarcastically chanting “You got a shot!”

“I didn’t think we played that poorly in the first, we just didn’t get anything to the net. In the second it starting developing,” said Coach Bazin.

The second goal for Northeastern came at even strength. Tired UMass Lowell defensemen allowed for Northeastern to capitalize, as Matt Filipe scored from the doorstep to make it 2-0 at 11:57.

The River Hawks finally found a spot on the scoreboard after killing off a penalty.

With some nice puck movement, senior defenseman and captain Michael Kapla found fellow senior defenseman Dylan Zink wide open on the weak side coming on an odd-man rush. Zink might not get to score an easier goal this season.

The River Hawks entered the second period facing 1:38 left on the penalty kill after a first period interference call on Kapla. Unfortunately they were not successful, as Gaudette scored his second goal of the contest.

After giving up the power play goal, the River Hawks seemed to play with a different attitude. Better passing allowed for the River Hawks to have extended offensive zone possessions and reduced turnovers. Their forecheck began to show good returns as a few ensuing goals came off turnovers.

After a penalty on Sam Kurker of Northeastern for slashing, junior forward C.J. Smith scored a power play goal at 2:30 of the second to make it 3-2 Northeastern. It was Smith’s fifteenth goal of the season, which is good for the team lead in goals.

The goal knotted the game at 3-3 as the teams went into the locker room for the second intermission.

“That third goal for them was a big goal, if we could have come out of that period 3-2 to start the third it’s a different situation,” said Northeastern head coach Jim Madigan.

While Northeastern clearly won the first period and UMass Lowell the second, the third period was tightly contested. Each team found offensive opportunities and seemed to split zone time evenly. But UMass Lowell found the back of the net first at 8:49 of the third.

Sophomore forward Connor Wilson put himself on the scoresheet with assists from coming from freshman defenseman Mattias Göransson and junior defenseman Tyler Mueller.

Northeastern quickly answered at 10:30 of the third, with Matt Filipe hitting the twine for his second goal of the game.

“It was an emotional contest… it was a back and forth game, I thought there was a lot of plays made,” said Bazin.

But Northeastern’s tally was not enough as Ryan Dmowski answered later on to win the game. An empty netter for freshman forward Kenny Hausinger put the game out of reach for the Huskies.

The River Hawks look to carry this momentum home Saturday, Feb. 4 against the University of New Hampshire at 7:00pm at the Tsongas Center.