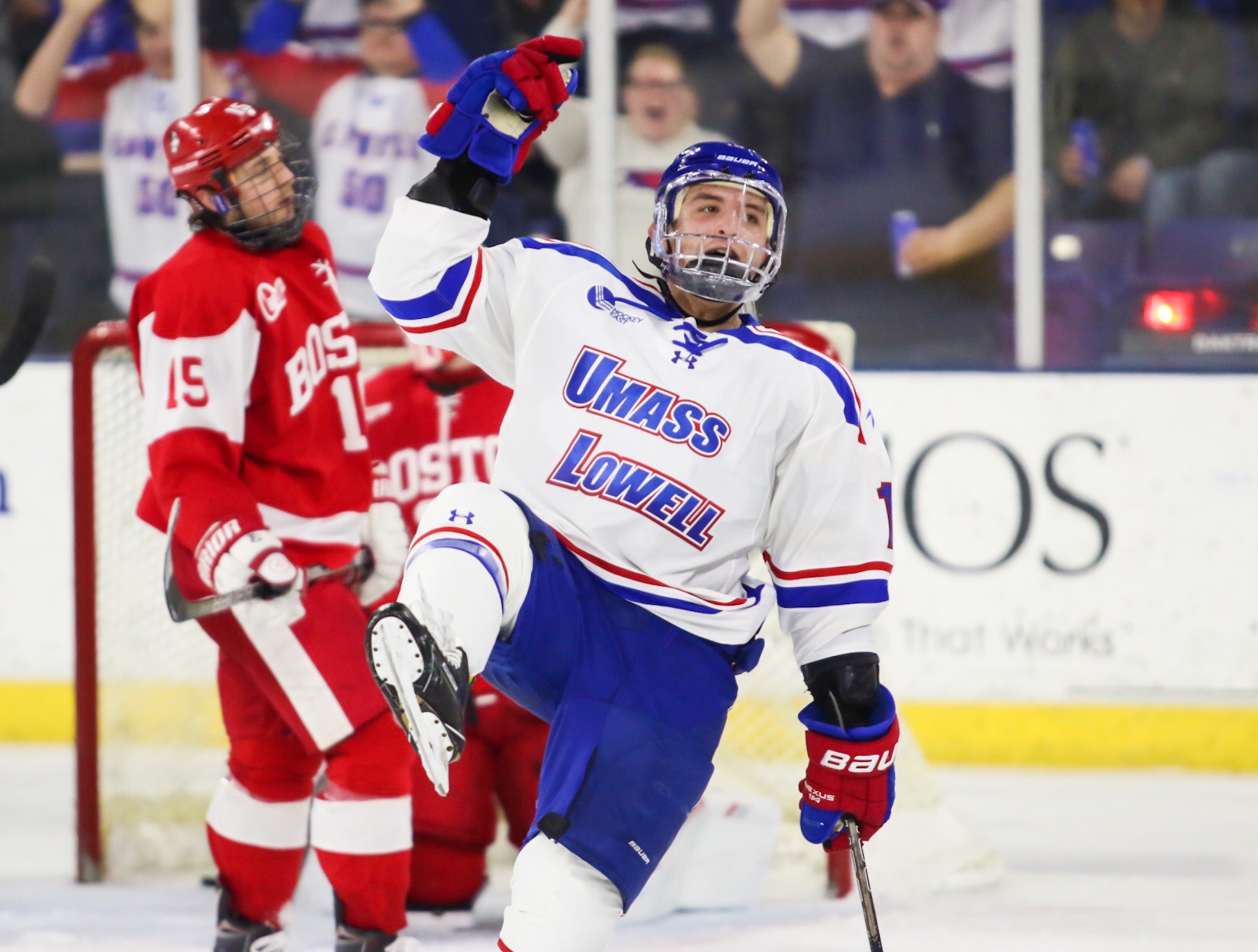 Freshman forward Kenny Hausinger celebrates after scoring the game winning goal for the River Hawks in the third period.

UMass Lowell looked to maintain momentum on their two-game winning streak coming into the game against Boston University at the Tsongas Center on Friday, Feb, 10.

The River Hawks extended their winning streak to three games with a come from behind 3-2 victory. Their record stands as 18-9-3 overall, with a 10-7-1 conference record.

Freshman forward Kenny Hausinger had the game winning goal, scoring his seventh of the season at 8:53 of the third period with assists going to CJ Smith and Michael Kapla. The River Hawks held the puck in the offensive zone, tiring out the Terriers penalty kill. Following a fortunate rebound, Hausinger found the puck in front and put it past Oettinger.

Special teams played a large factor in the game, with the River Hawks going 1-6 on the power play and the Terriers going 0-5.

“It was a game of ebbs and flows… So many penalties, so we had to kill a lot and then try to score on our own power play… Fortunately for us we scored on our power play in the third period,” said UMass Lowell head coach Norm Bazin.

The penalty kill came up huge for UMass Lowell, and the power play would have done better than 1-6 if it weren’t for BU’s freshman goaltender Jake Oettinger.

Oettinger finished the night with 23 saves in net, including a few robberies of the River Hawks. Freshman Tyler Wall played a strong game for the River Hawks as well, racking up 21 saves.

“I thought the goaltending was good on both sides, but Tyler had an excellent game today… When you play good teams like this at the end of the year you’re going to need good goaltending,” said Bazin.

The River Hawks found themselves on top early in the first period after an unassisted goal by senior forward and assistant captain Joe Gambardella. The seasoned veteran of UMass Lowell took advantage of a Terriers turnover in the neutral zone and attacked on a two-on-one. Gambardella elected not to pass and put a wrist shot top shelf on Oettinger’s goal side at 1:35 of the first.

Boston University did not wait long to answer, scoring under two minutes later at 3:22 on their first shot of the game. A bad turnover by UMass Lowell resulted in a great scoring chance and goal for freshman Patrick Harper of BU.

The River Hawks dug themselves a hole late in the first period by compounding penalties from juniors Ryan Collins and Tyler Mueller. UMass Lowell successfully fought off the ensuing five-on-three opportunity for the Terriers.

Special teams were the story of the second period especially, with UMass Lowell getting two five-on-three power plays that they could not take advantage of.

“You can’t take four penalties against these guys in one period, it really puts you on your heels,” said Boston University head coach David Quinn.

But BU did turn one of their penalty kills into a goal.

“They scored a [shorthanded goal], which was unfortunate for us but the guys did a very good job of putting it behind them and looking forward,” said Bazin.

As a penalty on senior Evan Campbell was killed off, sophomore Jordan Greenway of BU went to the box for tripping at 7:21 of the third, leading to the game-winning goal by Hausinger.

Despite a late flurry by the Terriers where they tallied 13 shots in the last 10 minutes, the River Hawks took home the win with a score of 3-2.

The River Hawks look to make it four wins in a row as they face UMass at the Tsongas on Feb. 11 at 7pm.