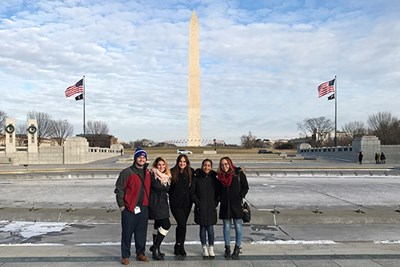 “It was almost unreal… It was just a weird feeling. The air was just full of contempt and uncertainty,” said sophomore Political Science major David Todisco.

Introduced by Professor Francis Talty, the UMass Lowell liaison to the Washington Center, on Jan. 10 four students presented on their experiences in Washington D.C. at, and leading up to, the Inauguration of 45th President Donald Trump.

In a one hour presentation, complete with a video summary, the students laid out their two-week trip; detailing their guest speaker series, monument visits, and first-hand accounts of Inauguration Day for a collection of peers and faculty.

“We get up, we had to get dressed up. We had guest speakers every day, and time to visit various museums and monuments,” said Todisco in summarizing the daily schedule.

In their travels, each morning, the group had the privilege of hearing panels from various political experts such as journalist Barbara Slavin and C-SPAN’s Bob Dean.

Members of the group did imply that the speakers tended, for the most part, to have a mild progressive lean.

Todisco had this to say, “We all kind of agreed that all the speakers had sort of a left lean. We were wondering if maybe in planning, they expected a Clinton win.”

As the polls showed, most Americans had expected a victory for Hillary Clinton in Nov. In fact, several students along for the trip were inclined, shortly after Trump’s election, to opt out of attendance; incredibly discontented to see this result.

“I emailed Professor Talty the morning of the result and told him, ‘I’m not going!’ But, I’m glad I did,” said Todisco.

When the initial resentment for the result died down, and after the experience was over, the students seemed pleased, overall, with their trip.

The two weeks were not only enjoyable, but also emotional and eye-opening.

“It sounds fun, but it really put into perspective how much you need to know to vote on something [in Congress]. It was sort of scary.

Are they putting as much time into this as they should be?” Said junior Political Science major Pamela Martinez. Martinez is involved in a Concord Coalition activity in which all the student representatives from across the country were put in the position of acting as Congress.

In the weeks leading up to Inauguration Day the students were able to visit countless monuments and museums. The Washington Monument, Lincoln Memorial, Korean War Memorial and the Smithsonian Museums; to name a few.

Locations such as the Vietnam War Memorial, Holocaust Museum and National Museum of African American History and Culture all earned a similar, profound response.

“Simply, so, so humbling,” said senior English major Adeja Crearer.
As the date of Trump’s Inauguration grew nearer, several students one again felt unsure whether they were comfortable in attendance. All citing general uneasiness.

Yet, each member of the group found themselves in attendance on Jan 20th, and each opened up to provide their honest feelings of the event. However, with no Trump supporters in their party, there was no shortage of discontent among the students toward the president and supporters.

“The things that I heard about [Trump Supporters] and how they act before… They proved me right. I was hoping to see something different, but they were like that!” Said Crearer, “It was really backward.”

She went on to describe the chanting of, “Make America Great Again!” as “cult-like.”

Whether it was the Inauguration of Trump itself, or atmosphere and crowd, Todisco went on to say that, “It was just a weird feeling. The air was just full of contempt and uncertainty… There was fear in the air.”

However, the group did not leave the Washington Center hopeless. Members of the group cited the trip as an “eye-opening”, “humbling” learning experience. They went on to discuss the importance of witnessing the peaceful, democratic turnover of power in the US.

Crearer and Todisco, who managed to elongate their trip a few hours to encompass the Women’s March on Washington cited their shift in feelings from hopeless and afraid one day to empowered the next.