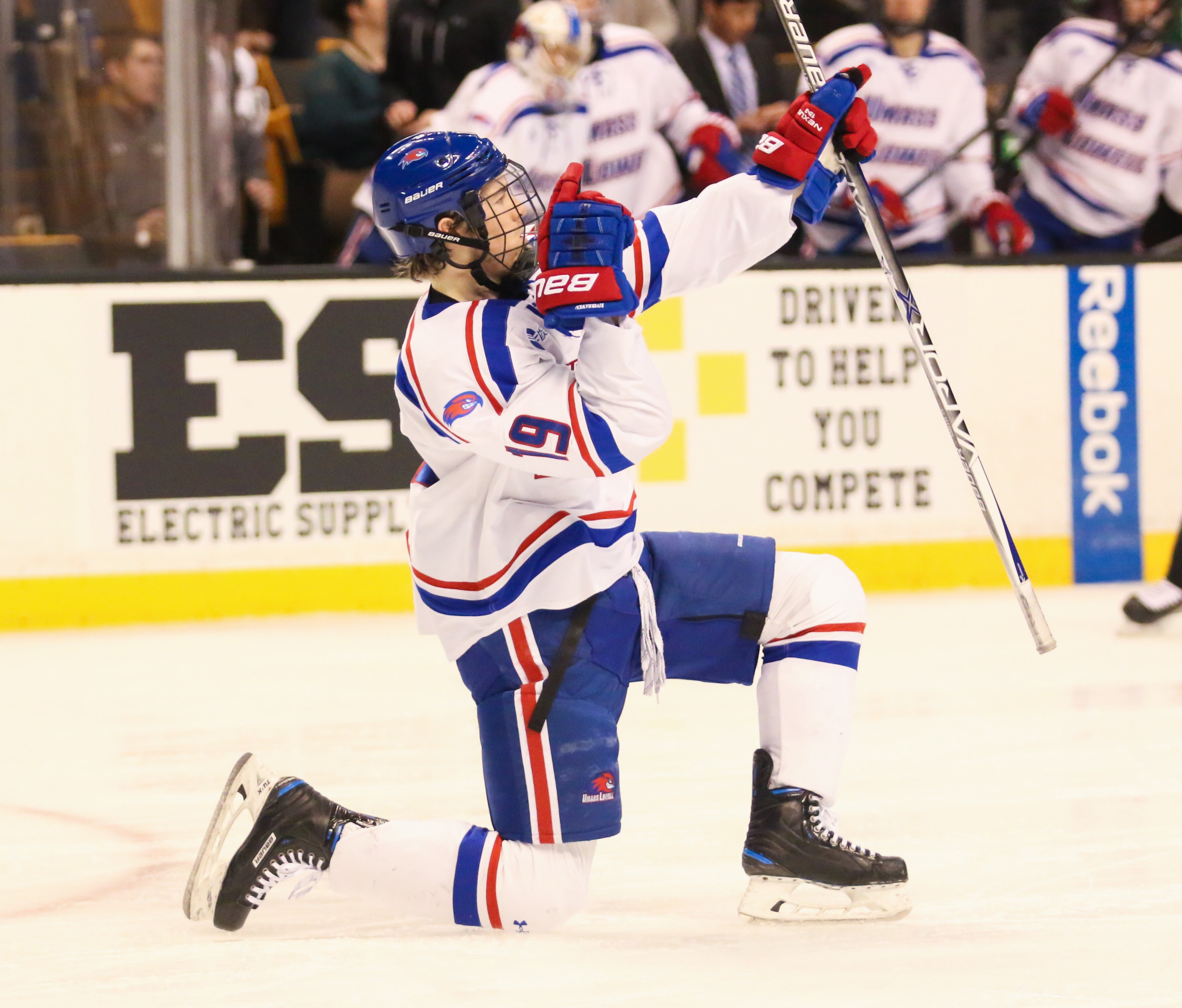 BOSTON – In a goal that freshman goaltender Tyler Wall might want to get back, Notre Dame forward Jack Jenkins sent a soft shot from center ice that trickled through Wall’s pads exactly seven minutes into the game – a move that shocked the River Hawk faithful in the stands at TD Garden. It seemed to spell a death knell for the River Hawks.

But there were 53 minutes to be played in the game, and the River Hawks used every last second to fight back and give the Notre Dame Fighting Irish a good show.

By the end of the full sixty minutes on Friday night, the River Hawks launched themselves into their fifth consecutive Hockey East Championship Final by a score of 5-1, sending Notre Dame back to Indiana with their tails between their legs.

The River Hawks finished with 41 shots on goal juxtaposed with the Fighting Irish’s 20.

“Anytime anybody on the team can contribute at this point in the season, we don’t consider any freshmen to be freshmen. They’ve done a great job leading their group class… we couldn’t be happier,” said Gambardella.

Twenty-five seconds after the opening goal scored by Notre Dame, O’Neil provoked his own cheers from the sizable River Hawk fan section with a tip-in goal, deflecting a sweet shot by Hausinger.

The River Hawks continued their scoring run with an electric goal scored by freshman forward Ryan Lohin who tallied the game’s third goal from flat on his back.

Coming off of a sharp pass from freshman defenseman Mattias Göransson, Lohin flicked his wrist as he fell on his back sending the puck just beyond Notre Dame goaltender Cal Petersen, setting the game in motion for the River Hawks.

Despite leading in shots 13-3 by the end of the first period, much of those opening twenty minutes were played in the neutral zone, with both teams zipping up and down the ice angling for any weaknesses they could find.

The River Hawks, when in their offensive zone, had several legitimate scoring chances, with a particularly well-executed one coming in the final thirty seconds of play.

Hausinger swept down the ice and shot off a nonchalant drop pass to junior forward C.J. Smith who charged Petersen and deked to stuff the puck between Petersen’s pads and the post.

While Notre Dame upped their shot total from 3 to 17 by the end of the second period, UMass Lowell asserted themselves in their offensive zone, keeping plays going by rocketing shots back into the zone and giving an unrelenting effort.

Smith and Kapla added goals of their own in the second period, upping the goal total to four while Notre Dame stayed at one.

Smith scored his 21st goal of the season with a snipe coming from the center of a faceoff circle that snuck right past Petersen. Smith pumped his fist as he glided across the ice on one knee to be congratulated by his teammates by extending the River Hawks’ lead to two 6:34 into the second period.

Kapla tallied his third goal of the season thanks to a spinaround pass from Hausinger just behind the Notre Dame net that Kapla rocketed top shelf.

The game was a clean one, with only four penalties coming in the entire game. UMass Lowell killed off their two penalties, even having a shorthanded chance on their second penalty kill.

The River Hawks found themselves on the power play for the first time in the game at 19:08 in the second period, which carried over into the opening minute of the third period.

The River Hawks took their 4-1 lead into the third period and put an additional exclamation point on it as freshman forward Nick Marin ripped off a rebound from junior forward Ryan Collins that made it a 5-1 game.

Lohin, named the first star of the game, said in the postgame press conference that the River Hawks “kept [their] foot on the gas pedal” following that first “fluky” goal let in by Wall, and UMass Lowell’s domination steamrolled the Fighting Irish, who seemed to roll over as the third period went on.

The River Hawks cruised onto their fifth consecutive Hockey East Finals appearance with the assertive win.

“It’s an exciting time of year to be playing hockey. It shows a stability, it shows a consistency within the program, a culture of accountability and the guys are itching to come back this year,” said UMass Lowell head coach Norm Bazin.

Bazin recognized that the regular season did not often go the River Hawks’ way, calling the 2016-17 season “brutal,” and emphasized that it was difficult for the program to make it so far in the Hockey East tournament.

Bazin and the River Hawks are pulling for a favorable outcome to the final against an undecided opponent at 7 p.m. tomorrow.

“We’re thrilled we’re here, but we’ve been on both sides. We’ve lost two championship games and we’ve won two. So we’d like to be on the side of the 2013-14 [Hockey East Championship-winning team],” said Coach Bazin.