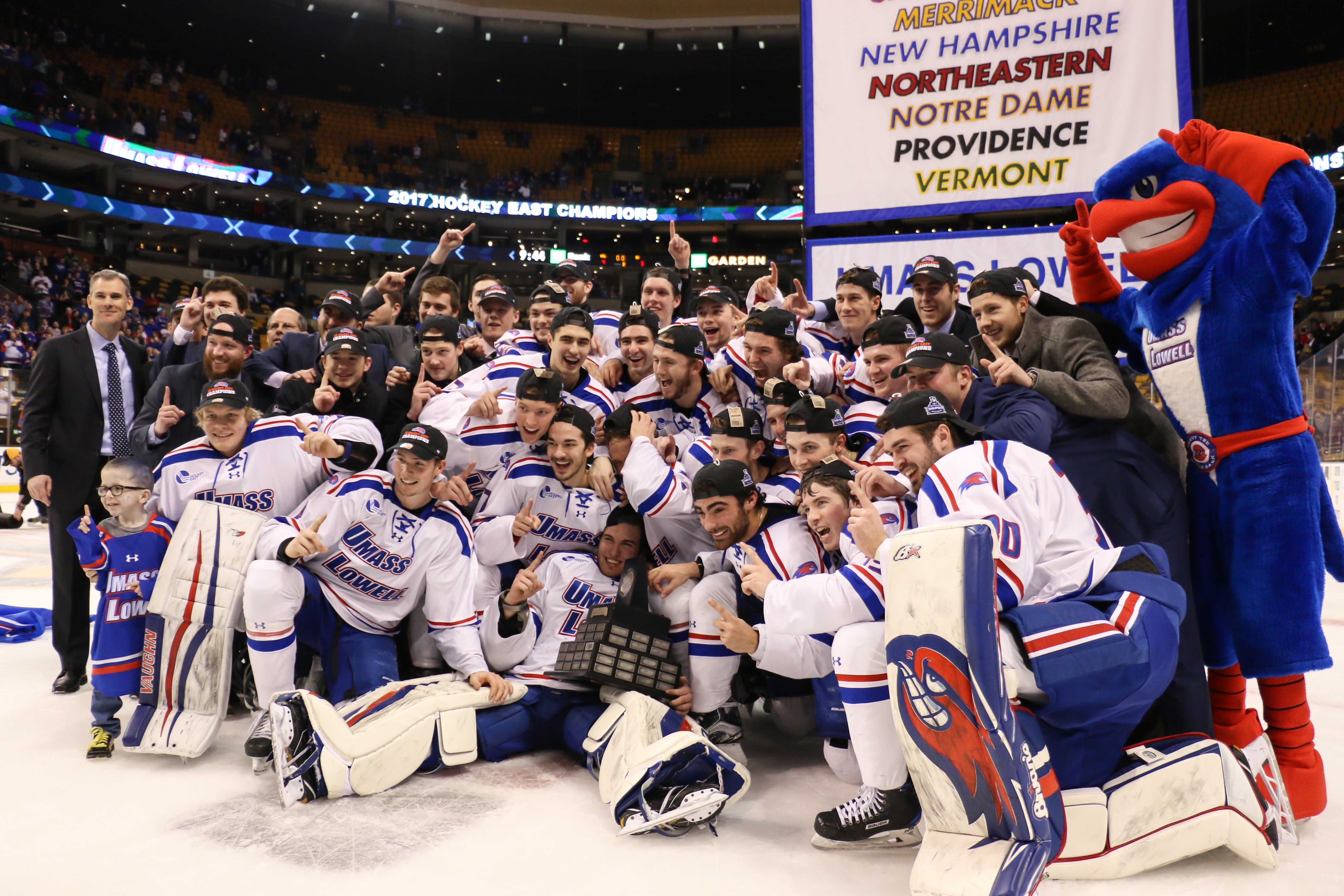 The River Hawks won their third Hockey East Championship in five years on Saturday night in a 4-3 win over the Boston College Eagles. (Matt Dwyer/Connector)

TD Garden pulsed with anticipation, raucous cheers of “UML, UML, UML” overpowering and charging up the place with equal parts rapturous joy and crippling fear that a 4-3 lead for the River Hawks would slip through their fingers and the 2017 Hockey East Final might have to be settled in the worst manner of all – overtime.

With Boston College skating six, their goaltender Joe Woll vacant from his post in a desperate effort to capitalize on a momentum swing for the Eagles, that very nearly happened.

With 47.7 seconds left on the clock a Boston College shot hit the UMass Lowell post.

The Eagles came within one late in the third, with a goal coming from Ryan Fitzgerald dredging up the Eagles’ hopes for an extended postseason. The Garden erupted and over 12,000 people were held captive in the arena as the clock ticked down, as anxiety from both sides shot through the roof and both teams played on.

However long that minute may have stretched, and however heavy the tension was in TD Garden, by the end of it as the panic spilled into celebration senior defenseman Dylan Zink skated around with a UMass Lowell flag amidst roars from the crowd, putting his 2017 Hockey East Champions baseball cap on backwards as the River Hawks seized their third Lou Lamoriello Trophy in five years.

UMass Lowell head coach Norm Bazin broke into a laugh at the very beginning of the postgame press conference.

“Wow, that’s what I can say. It is such a relief, the guys bent in the third period but they didn’t break. I am very, very proud of this group. I have two great players sitting besides me now,” said Coach Bazin, referring to junior forward C.J. Smith and senior forward Joe Gambardella. “But there are another 18 guys in the locker room right now that I am very proud of.”

As is the Lowell way, there was a lot of emphasis on the unit, as Gambardella credited the trainers and coaching staff for preparing the River Hawks for the championship.

“I’m very fortunate and very proud and ecstatic that I’ve had the opportunity to play with two amazing players over the last three years of my career here. We just all compliment each other so well. I think the team camaraderie on and off the ice… our chemistry has been very solid,” said Gambardella.

The top line combined for seven points, each of them tallying one of their own goals. Smith and Gambardella were honored as forwards for the All-Tournament Team.

Also honored by Hockey East was freshman goaltender Tyler Wall, who faced 41 shots in one of the strongest performances of his young career as a River Hawk. Wall was named to the All-Tournament Team as the goaltender, and his contributions were not lost on Coach Bazin.

“[Wall] was outstanding today. I don’t think you win a championship without a great goalie… Wall did an outstanding job. He was there for us… he certainly was huge for us tonight,” said Coach Bazin.

Wall made several key stops, many of those coming in the third period where Boston College out-attempted UMass Lowell 34-5.

His best came with seven minutes remaining in regulation, making a sprawling save to stifle one of the Eagles’ comeback attempts.

Boston College breathed down the River Hawks’ necks during much of the third period, whereas UMass Lowell dominated the first and second periods for the most part.

Smith scored the first goal of the game 1:06 into the first period, the shot coming smooth like silver as the Eagles’ Woll raised his blocker in vain.

From there, scoring was for the most part back and forth. Just over four minutes later the Eagles clawed their way into the game with a power play goal from Austin Cangelosi, his 21st goal of the season.

There were near-constant scoring chances for both sides during the first period as action scuttled back and forth. The first twenty minutes had four goals, two apiece coming from UMass Lowell and Boston College.

Scoring calmed down after the first period, with the last two of UMass Lowell’s goals coming in the second period and Boston College attempting a late third period comeback with Fitzgerald’s goal.

Three of the seven goals scored came from special teams efforts – with Boston College and UMass Lowell each notching a power play goal and Boston College scoring a shorthanded goal late in the first period to tie the game at two.

UMass Lowell had a huge penalty kill in the first period as they fought off a 5-on-3 that could have very well have changed the momentum of the entire game.

Despite the high level of dramatics that ensued in the third period with Boston College tallying 15 shots on goal compared to UMass Lowell’s two, the Eagles were ultimately ousted by the River Hawks.

Bazin, named Hockey East Coach of the Year, emphasized his pride for his dedicated squad. “They’re good, good kids who love to work, and I can’t say enough about them. This year was a testament to the type of kids they are,” said Coach Bazin.

“You had to take out Notre Dame and Boston College. Two incredible teams, and you got it done in the end. I’m very, very proud of our school and I’m happy we can hang another banner,” said Coach Bazin.