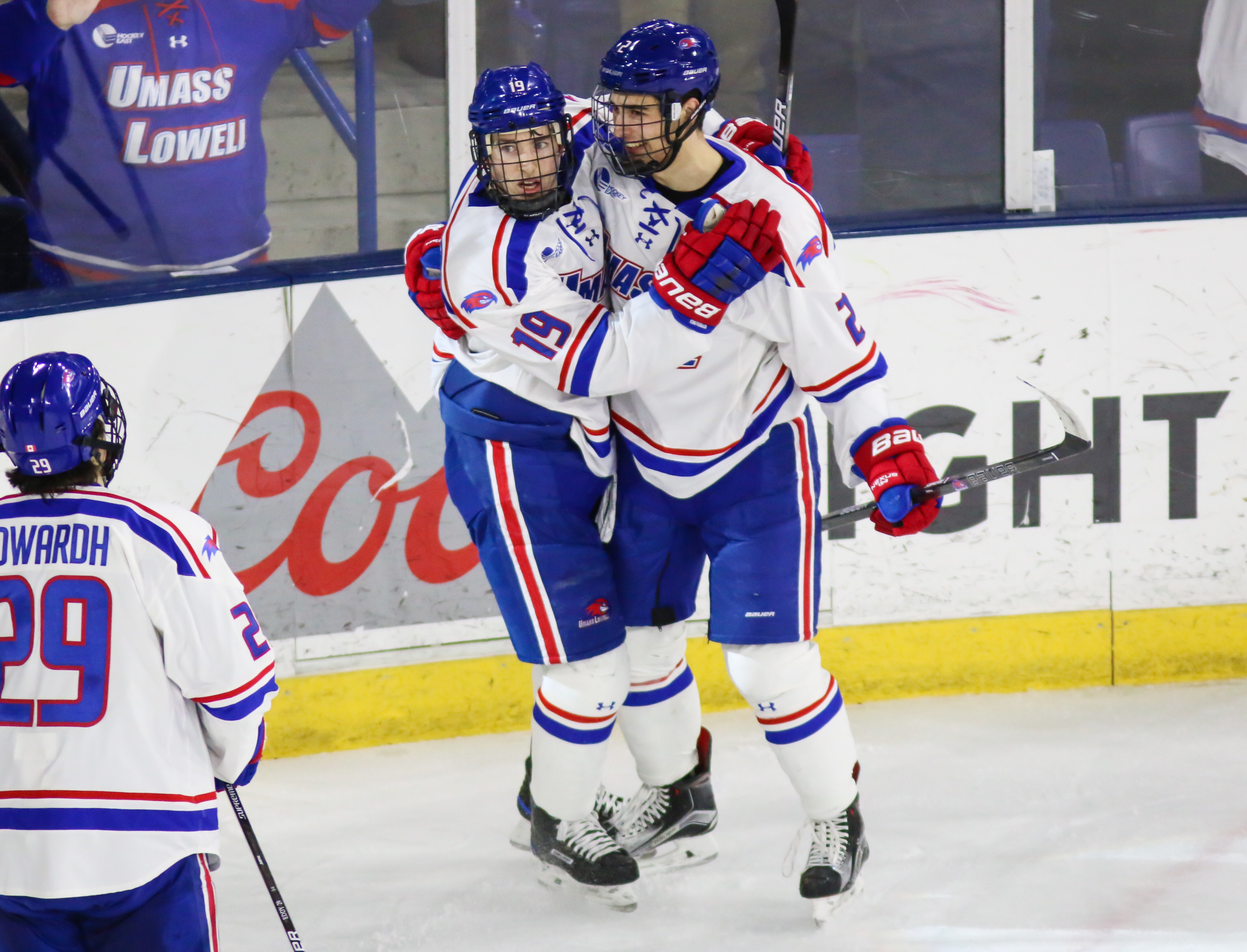 Tommy Panico celebrates with CJ Smith after scoring a goal in the first period to know the score at 1 a piece. (Matt Dwyer/Connector)

The same score, but a different outcome.

In the second game of the Hockey East quarterfinal matchup against the New Hampshire Wildcats, the UMass Lowell River Hawks forced a game three with their 3-1 win Saturday night, the same score by which they lost the previous night.

River Hawks’ junior defenseman John Edwardh was able to score the goal that would give UMass Lowell its first lead of the series and allow the team to continue on to win this game.

“I’m certainly pleased with the outcome. I liked our response tonight,” said UMass Lowell head coach Norm Bazin. “I thought several players ramped up their game tonight and we needed it.”

In the very beginning of the game, River Hawks’ senior forward Evan Campbell received a five-minute game misconduct penalty for a check to the head to start the game at 5:09.

The Wildcats were able to score the first goal during this power play off a breakaway. Senior defenseman Matias Cleland sent the puck to the back of the net for his third goal of the season.

UMass Lowell countered with a goal at 12:34, leveling the score at 1-1. Junior forward C.J. Smith sent a short pass to junior defenseman Tommy Panico, allowing him to score on the side of New Hampshire goaltender Danny Tirone.

Despite the back-and-forth nature of the first period, there were very few shots on goal. New Hampshire had only one, their sole goal during this period, while UMass Lowell had five.

There was only one other penalty in this period, which went to Wildcats’ defenseman Jason Salvaggio for holding with just under five minutes to play. The only power play opportunity for UMass Lowell in the first 20 minutes was unsuccessful and the game remained tied going into the second period.

The River Hawks had a stronger start to the second period, taking the lead 2-1. Defenseman John Edwardh scored off a long-range shot following a pass from fellow defenseman Ryan Dmowski.

UMass Lowell goaltender Tyler Wall had many crucial saves after this goal. He was able to save all nine shots on goal from the Wildcats this period, while Tirone saved 10 out of 12 shots by the River Hawks.

The second period contained many penalties, most stemming from fights that would break out after a save from either goaltender. By the end of the ninth minute, there were three UMass Lowell players in the box, as well as two from New Hampshire, leaving both teams shorthanded.

Dmowski was able to extend the lead for the River Hawks, 3-1, in the 11th minute. UMass Lowell captain Michael Kapla and Dylan Zink were credited with the assists. Kapla earned his 73rd career assist, the most out of the UMass Lowell defensemen.

The frequent interruptions in play due to the penalties disrupted the momentum and neither team was able to score for the remaining time.

The final period was much cleaner with one penalty coming from River Hawk defenseman Jake Kamrass in the 11th minute for goaltender interference and from Kapla with two seconds left to play.

Both teams continued their shot attempts in this period but to no avail. With a final score of 3-1, the River Hawks were able to earn their first victory in this series.

“We got the first goal tonight which we wanted to try and do and we did,” said New Hampshire head coach Dick Umile. “The third goal was a killer goal off the face-off, but we’ll come back tomorrow and here we go, it’s game three.”

As Umile said best, the two teams will play again tomorrow night at the Tsongas Center and the winner of the matchup will head to the TD Garden for the Hockey East Championships. Puck drop is scheduled for 4:05.