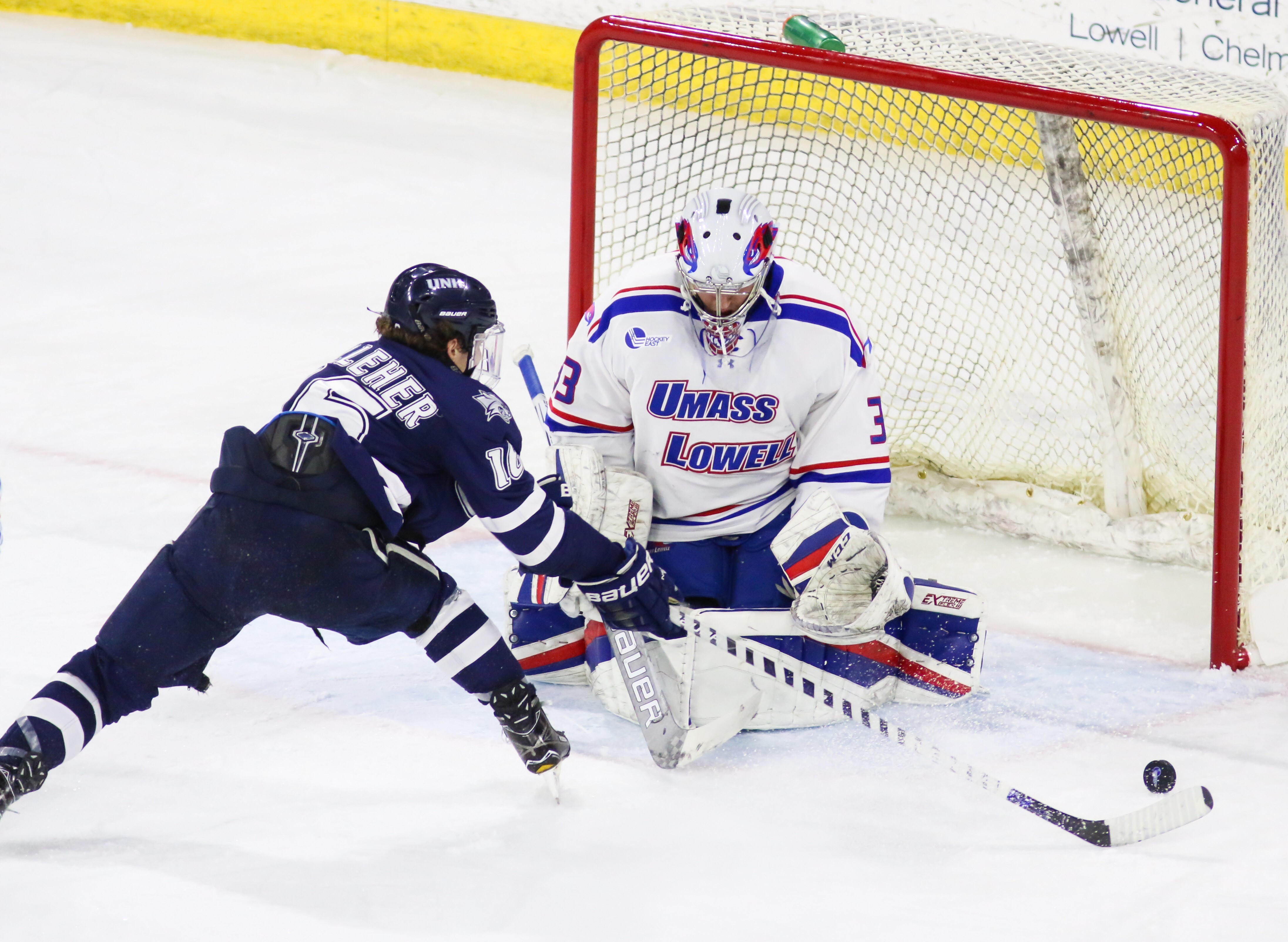 “I thought we were going to be ready to go head to head, and then it all fell apart,” said University of New Hampshire head coach Dick Umile. “Nothing much to say except that they took it to us tonight.”

UMass Lowell advanced to the semifinal round of the Hockey East Tournament when they ran away with an 8-2 victory in game three of the best-of-three series against the University of New Hampshire Wildcats at the Sunday afternoon Tsongas Center.

Coming out of two 3-1 tilts, one in favor of either side, both teams appeared poised to move on to the semifinals.

The shootout began early with New Hampshire taking a too many men on the ice minor within the opening minutes of regulation. UMass Lowell capitalized early when John Edwardh scored a rebound goal in the slot, assisted by Dylan Zink and Chris Forney.

Just minutes later, the Wildcats would answer with a 3-on-2 goal scored by Marcus Vela on a rebound from Jamie Hill to tie the game at 1-1.

Tyler Kelleher scored New Hampshire’s only other goal in the third period, good for his 25th of the season. Kelleher closed his season with 64 points.

“He’s a dynamite player. He’s one of the great college forwards right now… I was happy with my team. Things just didn’t work tonight,” said Umile.

In the 42 minutes between the Wildcat goals, UMass Lowell scored seven unanswered goals, five of which came in the first period.

“We just couldn’t handle them in our own end in the first period… Give credit to them. They really moved the puck,” said Umile.

Capitalizing on their opponent’s fatigue from a busy two weeks on the road, UMass Lowell peppered junior goaltender Danny Tirone with 31 shots.

“We realized that they’ve played three hockey games last week. For us it was a simple game plan. We wanted to use our legs. We had some fresh legs in the lineup… We felt we were fresh and we were able to control the tempo a little bit,” said Bazin.

Bazin’s focus following the game centered strongly around his team’s energy, culture and depth, assuring that this is what brought the team as far as it had come.

“Who’s the fourth line? I don’t know if we have a fourth line,” said Bazin. “We have four second lines… The freshman group. They came to play, and they picked the right time to contribute.”

The Hockey East Tournament will continue Friday, March 17 at the TD Garden with the semifinal round. Boston College will take on Boston University in the 8 p.m. matchup, while UMass Lowell will face fourth seed Notre Dame at 5 p.m.

Friday will mark UMass Lowell’s fifth straight semifinals appearance under Norm Bazin, and with the UNH series behind them, the River Hawks were excited to move on to the Garden once more.

“It’s in our culture. We kind of just expect to make it there. We showed tonight that we really want to make it back there again, and we were fortunate enough to do it tonight… It was a culture test. We take a lot of pride in going to the Garden,” said John Edwardh.