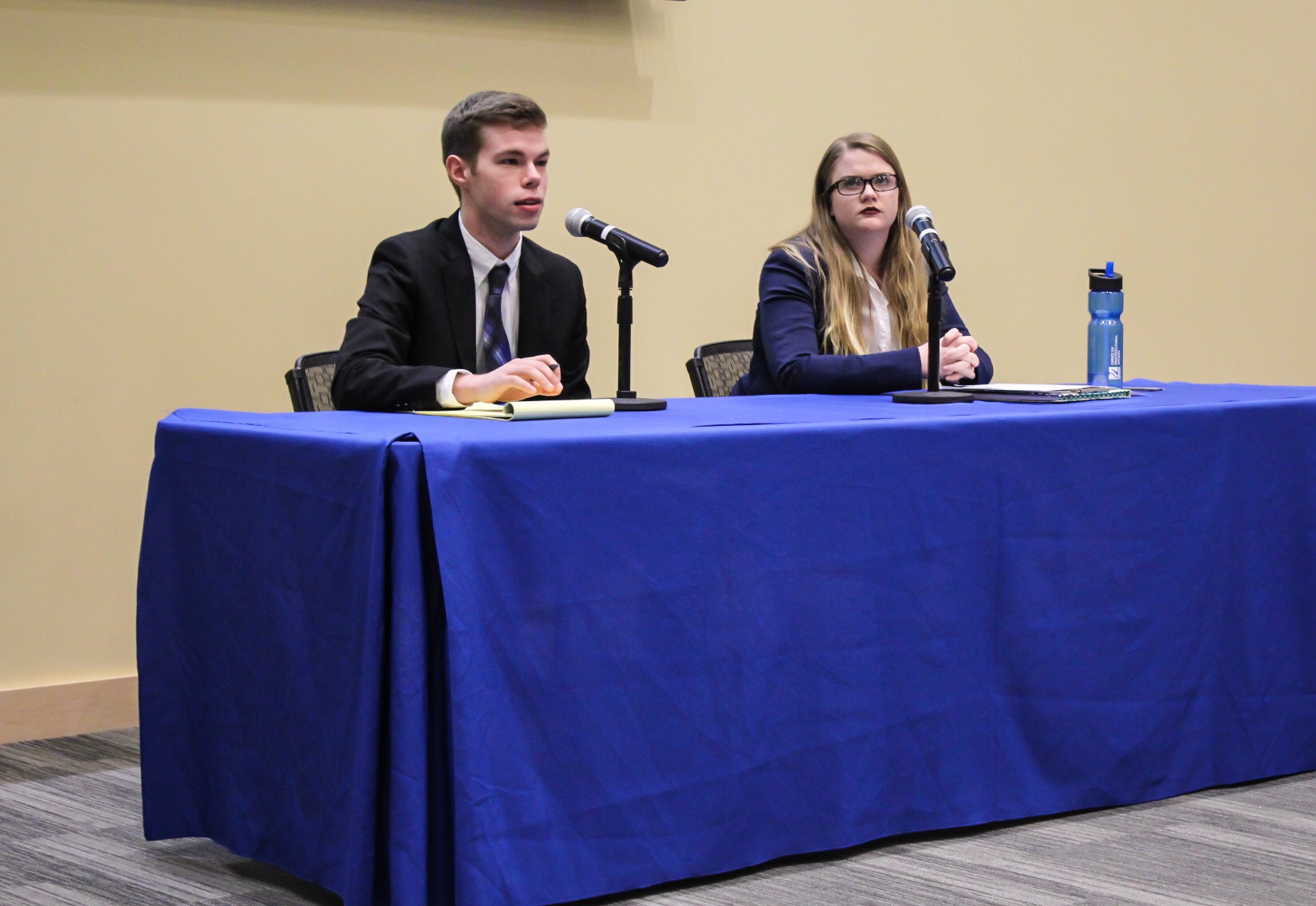 With Student Government Association’s election season coming to its close this week, the candidates for president, vice president and student trustee have been all over campus establishing a dialogue with students and doing everything they can to promote their platform before elections on Tuesday and Wednesday, March 7 and 8.

In their final push, the candidates took on questions from the student body, peers and faculty in a formal debate Monday, Feb. 28.

“It makes sure that we have a transparent process,” said outgoing SGA President James Christopher, citing the importance of an open debate in the SGA election process at UMass Lowell.

The debate was hosted by Student Activities and SGA and moderated by Professor Francis Talty, assistant dean of the College of Fine Arts, Humanities and Social Sciences and former student trustee at UMass Lowell.

The presidential candidates were both given time for opening and closing statements, along with answering various questions from the student body, Talty and one another.

Each candidate was faced with tough questions regarding Aramark, UMass Lowell’s foodservice provider, SGA e-board stipends, their track records in student government and even whether UMass Lowell should be willing to adopt the title of sanctuary campus.

“Holding our members accountable, SGA is here to support our student body and work for you. I want to designate club liaisons so there is communication between clubs and SGA, and eliminate stipends to SGA executive board to redirect those funds back to the clubs on our campus,” said Callahan, junior political science and criminal justice major and chair of the SGA Academic Affairs Committee.

Callahan went on to establish himself as a candidate with a proven track-record, having successfully advocated for increased safety measures on crosswalks around campus and taking initiative on complaints and suggestions filed in a survey he sent out to the student body.

Despite finding common ground with Callahan on issues such as UMass Lowell becoming a sanctuary campus or increased safety measures on campus, Degou set herself apart by advocating for SGA E-board stipends to remain as incentive for SGA’s board to keep their jobs representing the student body as their main priority.

Degou went on to establish her platform as centered around, “maximizing student success… I want to address student relations with the Solutions Center… We want to expand the Co-Op Program… and provide a 24-hour study space on campus.”

Next came the trustee debate between incumbent Lindy Reed and Dylan Lambert, a transfer student running with no past experience as an SGA Senate member.

“I have dedicated my entire career here at UMass Lowell to the student body… I think it is [an] advantage that I know how the Board of Trustees works. I can improve upon initiatives that I have already begun… I am always available, I am open to any issues or comments,” said Reed.

She often cited her lengthy record, not only of being the voting member of the student trustees for the entire UMass system last year and working to keep tuition and fees low, but also of her initiatives to increase transparency between her position and the student body. She mentioned her “Trustee Talks,” which addressed the state of all affairs related to her position via Facebook on a monthly basis, where the student body could readily access them.

On the other hand, her opponent cited his lack of experience specific to the position as a positive, believing firmly that his skills as a communicator and loyalty to his peers at UMass Lowell would allow him to achieve transparency and success on behalf of the student body.

“I owe a lot to the university. I feel that I could do a great job representing everyone here… No matter what the obstacle or circumstance, I must vote for the students. Even if it means voting against the broad interests of university higher-ups,” said Lambert.

Elections occur online on Tuesday and Wednesday, March 7 and 8 at uml.edu/elections.