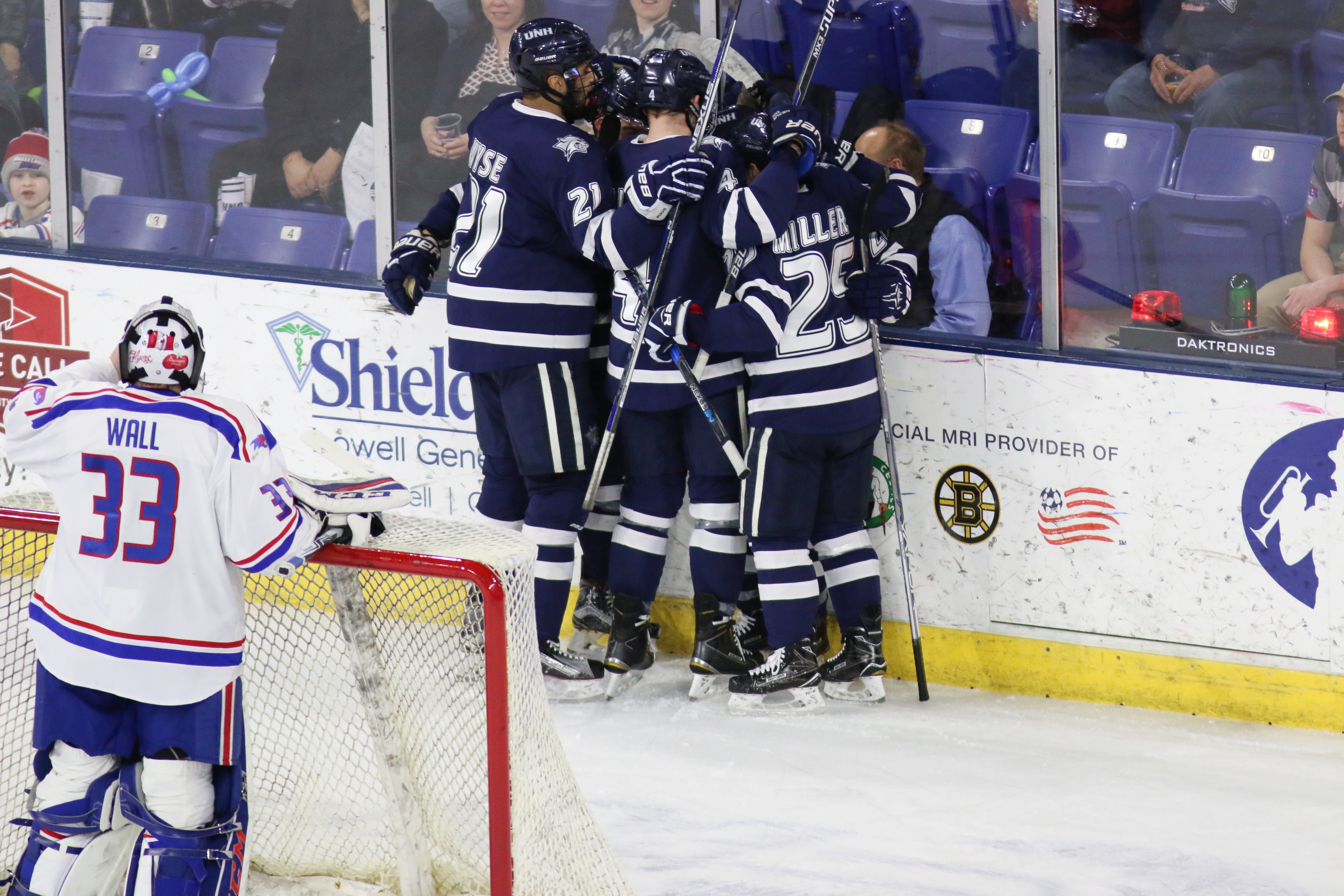 UNH players celebrate after scoring the second goal of the game. (Matt Dwyer/Connector)

It was not the Tyler Kelleher show Friday night at the Tsongas Center, as most expected it would have to be for the University of New Hampshire to come to UMass Lowell and take game one from the River Hawks in the Hockey East Quarterfinals.

Kelleher, a Hobey Baker nominee who was tied for the national lead in points (62) and first in assists (39) entering the night, registered two shots on goal but not a single point on the stat sheet.

Instead, junior netminder Danny Tirone made 34 saves, including 17 in the third period to help the No. 10 seed Wildcats take down the top-seeded River Hawks 3-1 and take a 1-0 series lead in the best-of-three.

“It was a classic example of chasing a game,” said UMass Lowell head coach Norm Bazin. “We dug ourselves into a little bit of a hole in the first, and we couldn’t dig ourselves out. I thought our third period was our best period and something to build off of for tomorrow. However, we’re going to have to be better in several areas.”

Forward Shane Eiserman opened the scoring for New Hampshire with a goal from the left circle 7:38 into the first period after the River Hawks failed to convert on a myriad of early scoring chances.

Patrick Grasso stretched the Wildcats’ lead to 2-0 with 4:49 left in the first period by beating freshman goaltender Tyler Wall glove-side from the right circle on the rush. UMass Lowell put six shots on net but were unable to answer with a goal in the first 20 minutes of play.

The River Hawks cut the deficit to 2-1 as sophomore forward Nick Master deflected a shot from senior defenseman Dylan Zink from the blue line into the net with 7:35 left in the second period.

Just over a minute later, however, Marcus Vela took advantage of a 3-on-1 opportunity from a UMass Lowell turnover to bring New Hampshire’s lead to 3-1 with 6:16 to play in the middle frame.

The River Hawks pulled Wall for the extra skater with 2:02 left in the third period, but the Wildcats’ defense and junior forward Jake Kamrass’s goaltender interference penalty with 23 seconds to play in regulation thwarted the late comeback attempt.

In addition to Tirone’s near-shutout performance, the Wildcats successfully killed off all four penalties they took, including two in the third period, to help protect their lead.

On the other side of the ice, Wall made just nine saves on 12 shots faced in the losing effort.

“Obviously, I’m pleased with the outcome, and I just like the way the team competed,” New Hampshire head coach Dick Umile said. “We gave up shots, obviously, in the third, but Tirone was strong in net. We blocked shots and played well defensively to make sure we got that win.”

The two teams meet again for game two of the Hockey East quarterfinal series Saturday night at the Tsongas Center. Puck drop is set for 7 p.m.