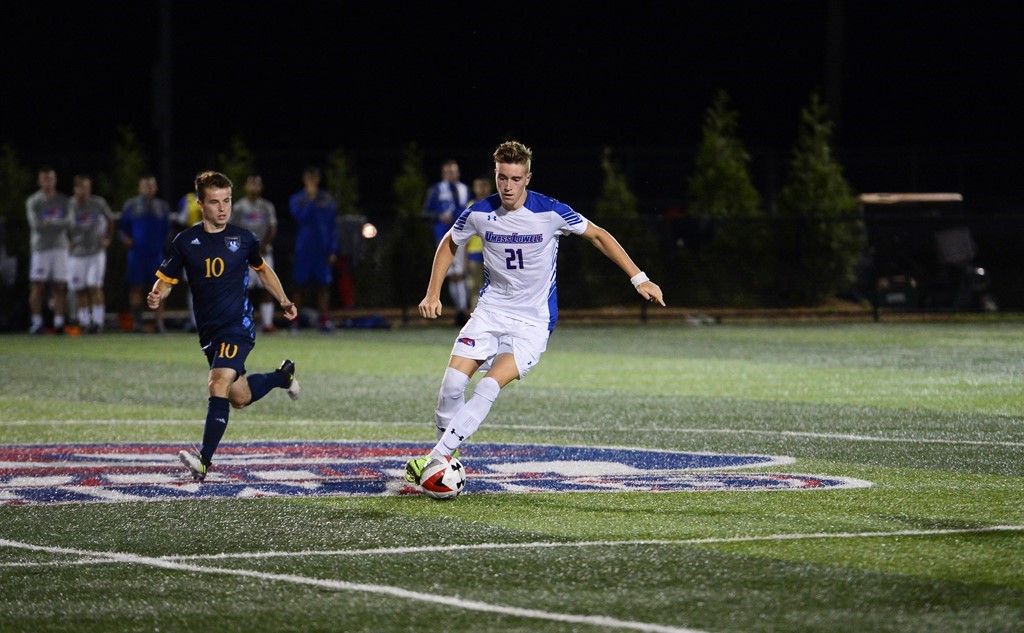 The UMass Lowell men’s soccer team defeated the Monmouth Hawks, 3-2, thanks to midfielder Dario Jovanovski’s game-winning goal in the final minutes of the match, Saturday night at Cushing Field.

“I thought it was great to see our guys fight back after going up 2-0 and having Monmouth equalize,” said UMass head coach Christian Figueroa. “It was great to get that late goal.”

UMass Lowell maintained strong possession to start the game. The backline was able to get past Monmouth’s press to connect with the midfield for upward play.

Midfielder Gui Rodriguez was the first to test Monmouth goalkeeper Bobby Edwards with a shot that led to a corner kick. Jovanovski’s corner led to a shot from midfielder Jannick Baumer that connected with the crossbar.

The high press did lead to a miscue from UMass Lowell goalkeeper Austin Kroll where his attempted clearance lead to a corner kick for Monmouth. The corner opportunity helped the Hawks settle down and maintain a bit of possession.

Midfielder Jakov Basic provided another scoring opportunity for UMass Lowell when his long-distance shot sailed past the upper left corner of the goal. The River Hawks’ attack centered around getting the ball to Jovanovski, hoping he could provide dangerous passes against the Monmouth defense. That pass arrived and eventually went to midfielder Joe Kellett whose shot was saved by Edwards.

Basic broke the deadlock with a long-distance strike putting the River Hawks up 1-0. Kellett and Rodriguez assisted on the goal.

Midfielder Colin Stripling provided the first shot for Monmouth in the closing minutes of the first half. The Hawks got a takeaway from UMass Lowell forcing the River Hawks to foul outside of the box for a dangerous free kick opportunity for Monmouth. Jake Areman’s free kick went high and wide.

Monmouth started out the second half with possession advantage. The Hawks built their attack off of passing errors from UMass Lowell. Midfielder George Akampeke’s header went wide as Monmouth tried to look for an equalizer.

Basic’s free kick goal would deny the Hawks that chance, however, as his kick curved around the Monmouth wall and sped past the keeper to give UMass Lowell a 2-0 lead.

Areman scored on his own free kick opportunity as his shot went to the upper left-hand side outside of the reach of Kroll, moving the score to 2-1.

The pace of the game increased with pressing from both sides. The physicality of the game also went up with some hard fouls delivered in attempts to slow down each side’s attack.

Forward Anes Mrkulic equalized off an assist from midfielder Santo Arena at the halfway point of the second half. Mrkulic found an opening in the UMass Lowell defense leaving a one-on-one battle with the goalkeeper. The freshman slotted the ball past the goalkeeper to put the Hawks back in the game.

Most the second half was a back and forth affair. Both sides had near chances at goal, while the score remained tied at two.

Jovanovski scored the game-winning goal for the River Hawks off a pass from forward Ivan Abramovic. Jovanovski’s initial shot was blocked by Edwards, but the ball bounced back to him and rolled into the net. UMass Lowell beat Monmouth 3-2 moving to 4-1-1 in the season.

“It was hard,” said Jovanovski on the game-winning goal. “The keeper was close, and I had a player behind me, so I had to react really fast, so I took a touch then [the ball] came next to me then I took [another] shot then it went in.”

The River Hawks will travel to New Hampshire to play Dartmouth, Wednesday, September 20 at 7 p.m. to start a three-game road stand. The team will return home October 7 to play Stony Brook.