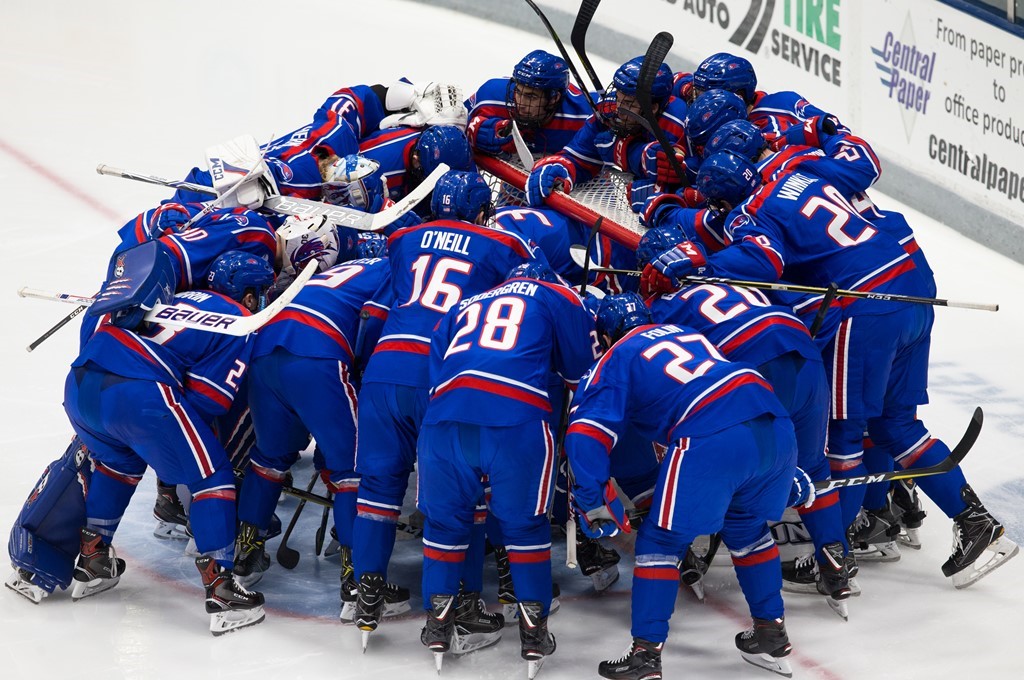 Croix and the team gather before taking on the University of New Hampshire. (Courtesy of UMass Lowell Athletics).

Born in Alaska, but raised in Minnesota, freshman defenseman Croix Evingson came to know and love the fast-paced sport of hockey at the ripe age of four. Sixteen years later and he is still hooked.

“I fell in love with it right away,” said Evingson.

He lived close to his local rink in Minnesota and says hockey “just seemed like the right fit.”

After pondering on the thought, he credits his father with inspiring him to play.

“My dad [inspired me] because he introduced the game to me. He’s kind of the one that taught me how to skate. Both my parents did,” he said.

His father grew up playing hockey. Evingson said that his father definitely had an influence on him. As a child, Evingson says that he looked up to the professional players with dreams of one day being like them.

“I feel like when you’re a little kid you always look up to the pro hockey players and you kind of hope one day maybe you can achieve that,” said Evingson.

When it comes to his most rewarding moment either on or off the ice, committing to play Division I hockey at UMass Lowell is that moment for Evingson.

“It was a dream to play college hockey. It just seems like a really good fit and I’m excited to get started here,” he said.

Before attending UMass Lowell, Evingson played in the North American Hockey League (NAHL) for the Shreveport Mudbugs in Louisiana. According to his biography on the UMass Lowell athletics website, he was named Defenseman of the Year and selected to the All-NAHL Team, as well as the All-South Division Team. Additionally, he recorded a total of 52 points in 59 games and racked up 40 assists.

Evingson said the transitioning from an NAHL team to a Division I team was a big adjustment.

“The guys are older, they’re bigger, and faster, and stronger, so you definitely [have to] pick up your pace of play and get adjusted pretty quick because it’s not waiting for you,” he said. “You [have to] adjust. So, once you get your feet wet, get comfortable a little bit and get up to speed, it’ll be good.”

One of the things Evingson is looking forward to the most is having the school community attend the games. He said he is also excited about being with his teammates all day long and growing as a group throughout the year.

Evingson also spoke about how he thought playing for UMass Lowell will improve his technique and skill and said that UMass Lowell was a perfect fit for him.

“We have great coaches here and endless resources to get better, you know it’s up to you to spend the work,” he said.

During the 2016 National Hockey League draft, Evingson was selected by the Winnipeg Jets in the seventh round and was 211th overall. When it came to the draft, he said that he was not getting his hopes up. He had an inkling that he might get picked, but when it happened, he said it was “obviously pretty cool and it’s kind of a dream come true.” At the moment though, he is just focused on being at UMass Lowell.

A week before classes started, Evingson found himself at the Winnipeg Jets practice camp. Although it was a big step and a good experience, he said he is still looking forward to being at UMass Lowell, playing with the team, and improving his game.

On why he chose UMass Lowell, Evingson said everything — the coaches, the campus, the arena, the history and culture — just made sense to him. He says that it is the perfect fit.