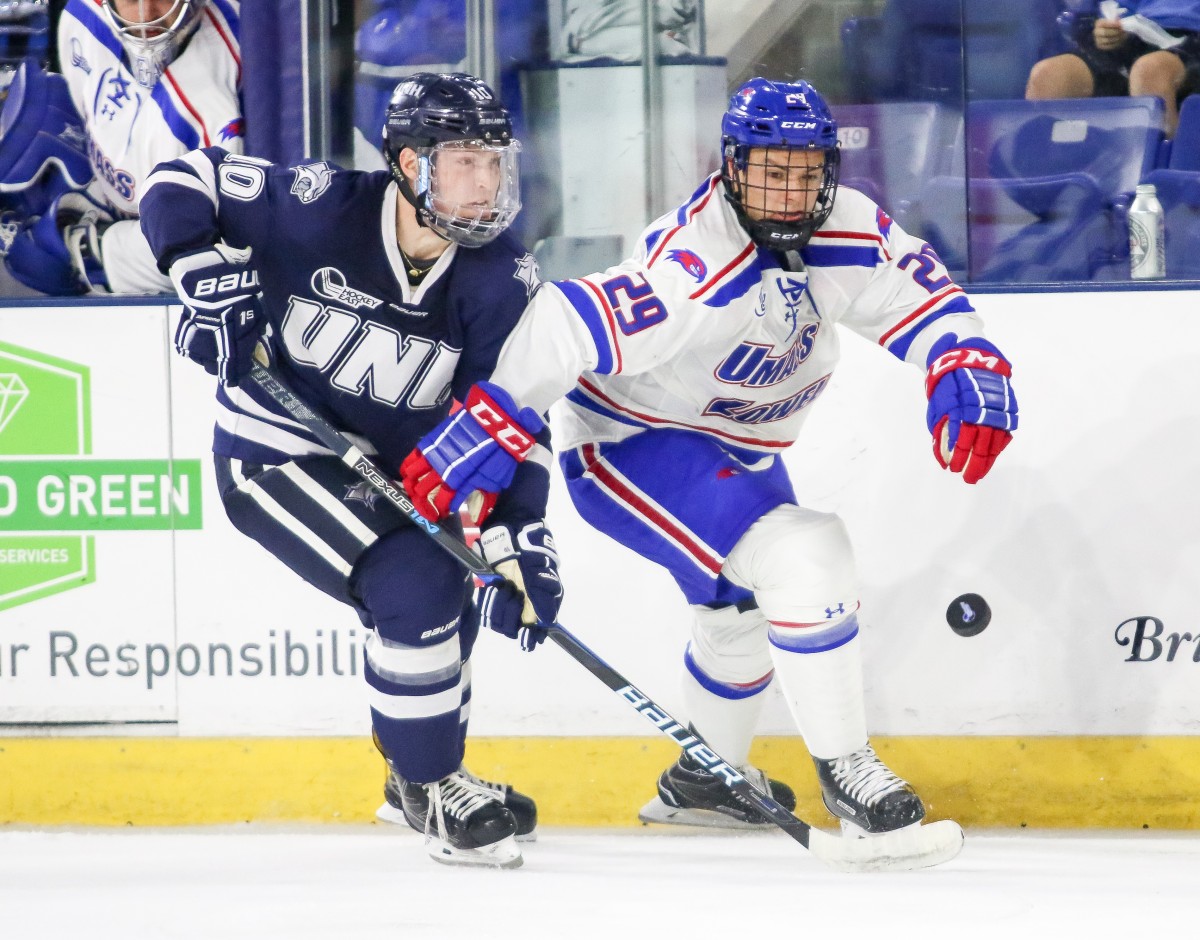 Despite scoring to come back from a one goal deficit twice in the third period, the fifth-ranked UMass Lowell men’s ice hockey team was bested in the closing 14 seconds by the University of New Hampshire Wildcats in their first regular season game of the 2017-18 season.

“I didn’t see a whole lot of urgency. I think it’s more in the rust. I think a lot of guys forgot how to work… You can call it ‘Championship Hangover’. You can call it whatever you want. I call it forgetting how to work,” said UMass Lowell head coach Norm Bazin.

The final goal came at the hands of Wildcat senior forward Shane Eiserman, assisted by defenseman Max Gildon, exactly one minute after UMass Lowell’s senior forward Jake Kamrass knotted the game at 3-3 on the power play with the goaltender pulled.

“It was great to get the two points, and we’re rolling now,” said Eiserman. “It just kind of landed at my feet. [It] was a great bounce. It was crazy. But, back at it again tomorrow.”

Friday’s season opener was not only the start of a home-and-home weekend between the two teams, but also their first meeting since March, when the River Hawks bested the Wildcats 8-2 in the quarterfinal round of the Hockey East Tournament.

Before puck drop, with 5,426 spectators filling the seats at the Tsongas Center, the River Hawk fan section celebrated the unveiling of their 2017 Hockey East Regular and Postseason Championship banners as well as their 2017 NCAA Tournament banner.

The by-a-nose finish that followed started with what was a relatively uneventful first period of play.

A balanced first period resulted in just one mark on the scoreboard. At 6:06 junior forward Connor Wilson netted a wrist shot over the shoulder of UNH goaltender Danny Tirone, assisted by senior defenseman Tommy Panico and Kamrass that would carry the River Hawks into the second period unscathed.

The ice tilted heavily, however, in the Wildcats’ favor in the second period of play.

“We had some great chances to really open it up… I just think it added to the confidence of the team in that second period, the way we played. This is a tough place to play. They’re one of the top teams in the country and we came out in the second and went head to head with them,” said UNH head coach Dick Umile.

Peppering UMass Lowell sophomore goaltender Tyler Wall with 15 shots, the Wildcats carried the period and outshot the River Hawks by 11. UNH also managed to find the back of the net in the second, tallying two goals and heading to intermission with the lead.

The first of the Wildcat goals was scored at even strength by junior forward Marcus Vela, assisted by defenseman Cameron Marks. The second goal came just 45 seconds later when fellow junior forward Frankie Cefalu netted one on the power play, the helpers coming from forwards Chris Miller and Brendan van Riemsdyk.

“We were on the wrong side of the puck the whole second period. We had four shots… and that’s not enough to win in any league,” said Bazin.

Entering the third period down a goal, UMass Lowell seemed to reassert itself early on. A goal in the first five minutes from senior forward John Edwardh, assisted by sophomore forwards Ryan Lohin and Kenny Hausinger, bought life back to the crowd at the Tsongas.

The momentum seemed to stick with the River Hawks for most of the closing period. Despite letting up a top shelf backhand from Wildcat junior forward Ara Nazarian at the midway point UMass Lowell managed to tie the game one more in the closing minutes, but the last minute goal was not enough to keep a determined UNH from walking off with two points in their first game of the 2017-18 season.

“I thought we had a little bit better of a third period. There was a bit more urgency. But obviously we lose a stick battle there late in the period and it cost us,” said Bazin.

Quick to address his concerns with the performance he added, “We’re going to have to get back to working if we want to have any chance in this league.”

UMass Lowell will finish their series with the Wildcats on Saturday Oct. 7 at the University of New Hampshire. The Hockey East matchup will begin at 7 p.m.