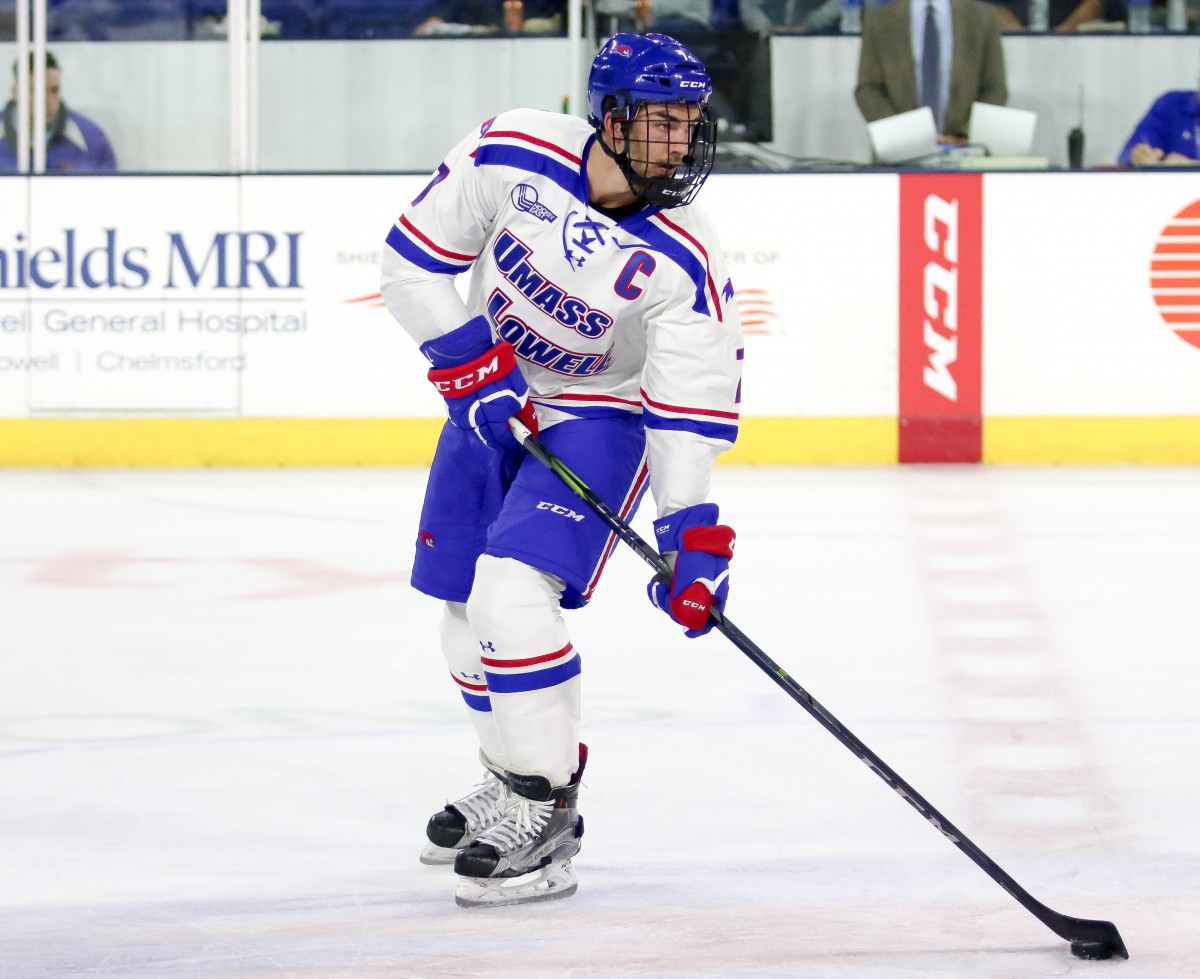 Tyler Mueller is a captain in his final season as a River Hawk. (Matt Dwyer/Connector)

Like his head coach, senior defenseman and captain of the men’s ice hockey team Tyler Mueller appears to be a man of few words. He answers questions directly, with no more clutter than a fair smattering of “you knows” in his sentences. And for the most part during his time at UMass Lowell, Mueller has stayed under the radar.

Mueller tallied nine points in 39 games during the 2016-17 season. His scoring, while intermittent, was a boost for the River Hawks: UMass Lowell had a 5-2-1 record when Mueller scored a point. Beyond that, Mueller was developing as a leader, serving as an assistant captain under senior defenseman Michael Kapla.

The Regina, Saskatchewan native’s efforts have left quite the impression on head coach Norm Bazin, the stern and fearless leader of the River Hawks.

“He’s been through a lot of wars and he’s been here for three years. I think he leads by example and he’s going to continue to emerge as the leader and be a little more vocal this year,” said Bazin.

Mueller speaks softly and matter-of-factly. Beyond wearing the “C” on his sweater, he is easygoing and intelligent; just as he knows hockey, he also knows himself. Even as a freshman on a well-established River Hawk squad, he says that he saw himself in a leadership position.

His priorities as a player bled into his promise as a leader. Mueller says that above all, he feels pride in being a good teammate and that working hard every day along with “doing the right things” contributed to his position as a leader.

“I think if you do that, you know, that’s the qualities of a leader and that’s something that I pride myself in,” said Mueller.

The previous captain, Kapla, had two years to lead the team, but Mueller only has one. But in sharing responsibility last year and learning the nuances of leadership under Kapla, he says that it has come quite easily to him.

“I don’t know about philosophies. I think a lot of it is your natural, you know, style of leader[ship]. There’s definitely areas you can always improve on [in] being a leader. But I think your natural tendencies will always kind of shine through,” said Mueller.

With the additional responsibility and weight of being captain, Mueller also finds himself occupied off the ice. After graduating with his bachelor’s degree in the spring, Mueller has embarked on his master’s and is balancing that with Division I hockey.

Mueller’s achievements do not go unnoticed by Bazin.

“That’s pretty impressive and very mature of the kid. He’s well above his class from a standpoint in maturity,” said Bazin.

Mueller does not seem to be particularly flustered by the enormity of it all; for him, it is another year in the books. Just a little bit trickier.

“I took two grad classes in the summer and then [I’m] taking some now this semester and you know, it is tougher. But I guess you kind of figure out how to time-manage through the three years previously. Just maybe a little bit more work this year, but kind of [the] same process,” said Mueller.

As the River Hawks seek to follow up on their banner year last season as Hockey East champions, Mueller’s goals center around not himself but his teammates, whom he describes as “a good supporting cast.”

He carefully avoids excessive mention of himself and works hard to not praise himself too highly. But he does speak of the ties between player and leader, the motivations that stir underneath the skins of both. At the end of that, he says that his individual goal as a player and captain is to improve every day, do the right things and exemplify the qualities of being a good player.