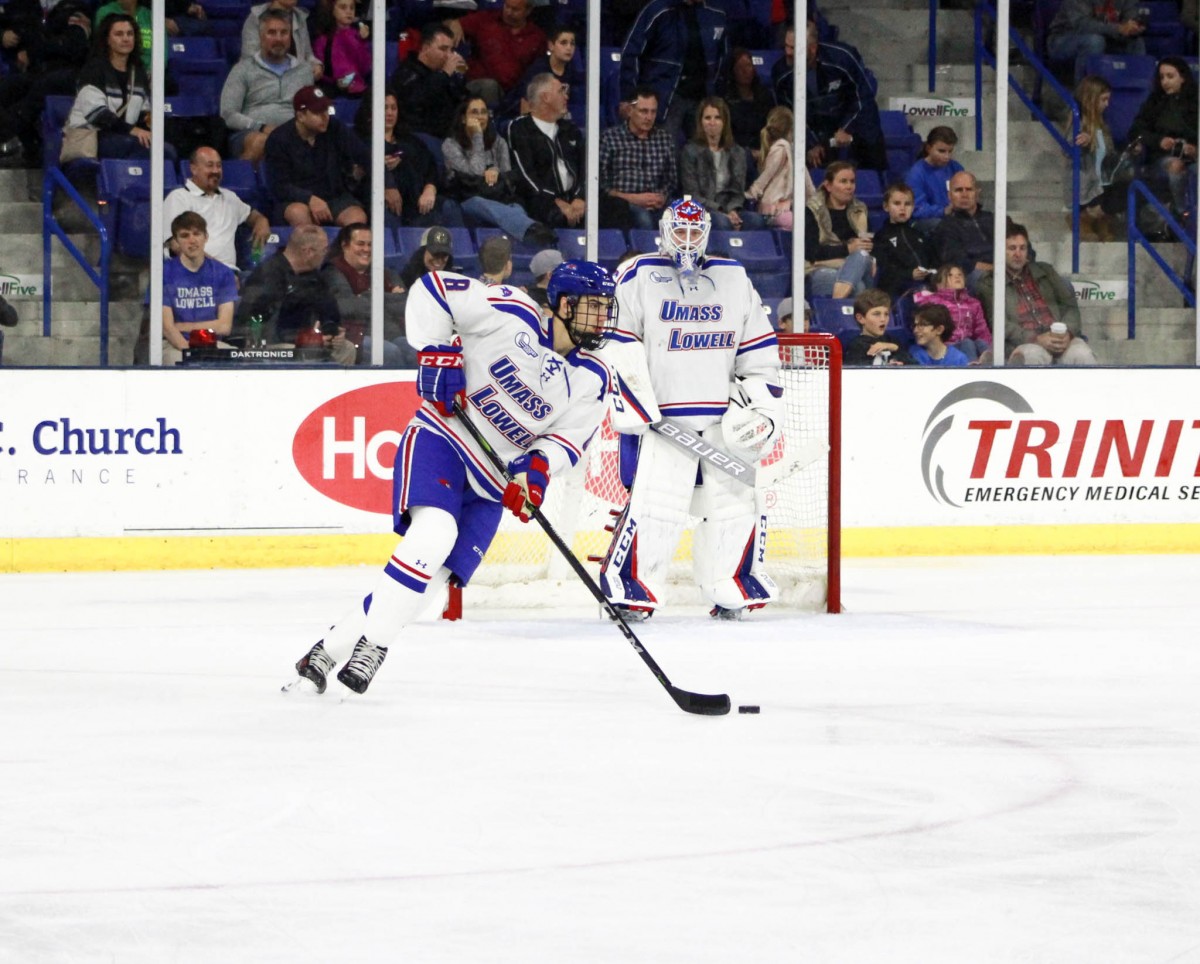 Croix Evingson celebrates with his teammates after scoring his first career goal as a River Hawk. (Matt Dwyer/Connector)

Following festivities surrounding the Tsongas Center on Saturday, Oct. 14, Homecoming came to a close with the UMass Lowell men’s ice hockey team rounding out the series against the University of Nebraska at Omaha (UNO) with a 5-2 victory.

University alumni and current students dispersed among the 5,376-attendee crowd were treated to a more confident and urgent River Hawks team. Truly making their 2017-18 Homecoming, UMass Lowell snapped out of their three-game, season-starting slump and bested the Mavericks in a hotly contested tilt.

The first period of play saw a fresh, fiery start for UMass Lowell. Dominating possession and connecting on passes, the River Hawks established their presence early.

Senior forward John Edwardh was able to net one early, finishing on a lengthy cycle in the offensive zone. Assists on Edwardh’s second goal of the season came from junior forward Ryan Dmowski and freshman defenseman Croix Evingson.

Despite outshooting UNO 16-3 in the first, Edwardh scored the only goal of the period. The early goal proved to be a morale booster for the River Hawks, and the calm offensive touch carried throughout the game.

“I think our detail work was key [with] strong sticks. We were able to increase our level of urgency from yesterday,” said Edwardh.

The Mavericks did, however, return reinvigorated from the first intermission, and they carried a new energy with them throughout the rest of regulation. Keeping UMass Lowell to just four shots on the period, UNO was, however, unable to deny the River Hawk offense, who still managed to find the back of the net twice in the second period.

UMass Lowell’s first goal came at the hands of sophomore defenseman Mattias Goransson who was able to finish a rebound on a 2-on-1 opportunity for Edwardh and junior forward Nick Master.

Evingson increased the Maverick’s deficit to three, scoring his first career goal with the River Hawks when he was given a breakaway pass by senior defenseman Chris Forney as he exited the penalty box.

In spite of two early goals against in the second, UNO was finally able to establish a presence in the offensive zone where they peppered junior goaltender Christoffer Hernberg with 14 shots, two of which found their way to the back of the net. Both goals were scored by junior forward Mason Morelli within three minutes of each other.

“Hernberg came in and relieved from yesterday and I thought he did a great job,” said Bazin.

Amid the fervent cheers, Hernberg, who had stepped in the night before after 2016-17 Hockey East Tournament starter Tyler Wall gave up four goals in 30 minutes, weathered the storm in the second period for the River Hawks.

Stopping 24 shots, and coming away with a .923 save percentage, Hernberg was a standout performer in the River Hawks’ first regular season victory, giving the team a chance to answer UNO’s momentum with a pair of their own goals to close out the game.

UMass Lowell’s final tallies both came unassisted at even strength in the third. The first came from sophomore forward Kenny Hausinger in the offensive zone. The second came by way of Tyler Mueller who scored on an empty UNO net from upwards of 140 feet away in his defensive zone.

A dominant third period of play was exactly what UMass Lowell needed, and exactly what Bazin thought allowed the 2016-17 Hockey East Tournament Champions to snap out of their three-game losing streak.

“The third period I was happy with,” said Bazin. “We came in and there was really no doubt… I thought we took the play to them, and we were able to get pucks deep. The way we played in the third period is the way you have to play in order to have a chance and we did it.”