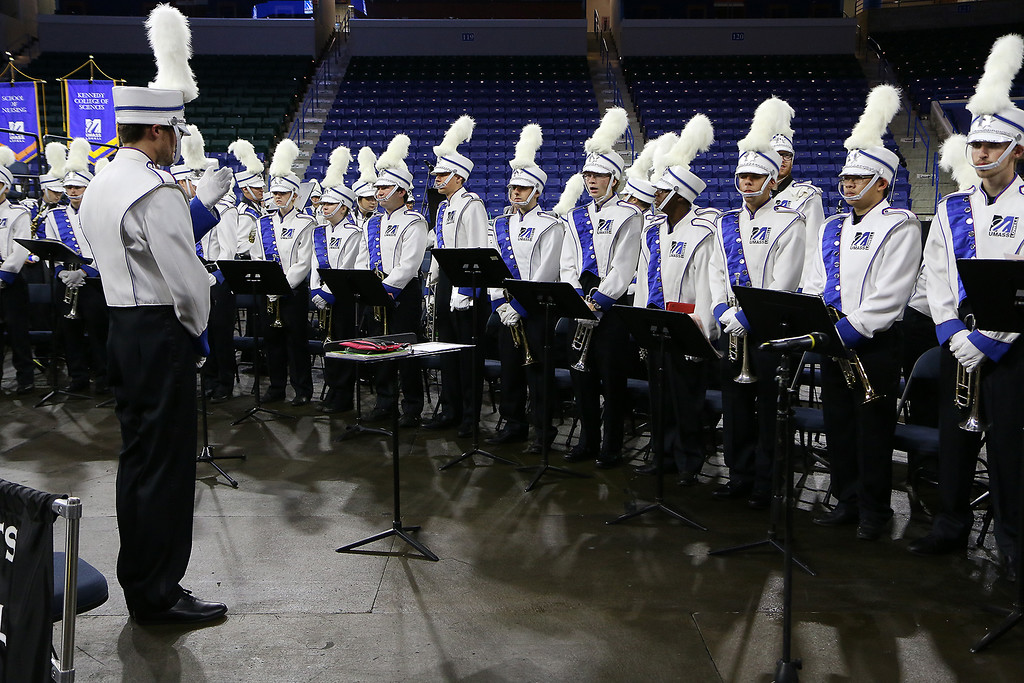 The UMass Lowell Marching Band performed at the 2016 Freshman Convocation. (Courtesy of the Lowell Sun)

For most, the UMass Lowell is known, primarily, for its engineering discipline and hockey team; there is, however, something else that is arguably just as important to the identity of UMass Lowell. It is the UMass Lowell Marching Band.

With over 120 current members, it’s one of the largest student groups and, if you have lived on South Campus during the fall semester, it’s not hard to see, and hear, why. The music selections performed by the marching band are, to put it simply, “unconventional.” In the years that I have been at UMass Lowell, the marching band has done arrangements of Queen, Led Zeppelin and is currently performing the music of Chase. The music choice is not the only thing that catches people’s attention; one needs only to watch the rehearsals that take place every other evening to see the grand spectacle of putting that music into motion with feats of coordination that, when executed as intended, create some astonishing displays.

You’re probably wondering, “Good musical performances are great, fantastic even, but what makes this one group that is probably comprised mostly of music majors and does most of its work on South Campus, so important to UMass Lowell?” That is a good question, hypothetical reader, and the answer lies not only within what it does primarily, but what it does for its students and the university.

Debra-Nicole “Deb” Huber, the associate director of University Bands, explains, “It’s a microcosm of the university,” in reference to the level of diversity and tolerance shared amongst its members as a reflection of UMass Lowell. Deb describes the marching band as a community that promotes growth amongst its members through teaching discipline and commitment towards an intangible goal of success that generates “unique and lasting impressions” upon those who pursue it. The students who are a part of the band are proof of that dedication as they are comprised of freshmen all the way to graduates as opposed to the norm of most college marching bands having only freshman and sophomore students.

People stick with the marching band because it challenges them, pushes them; it demands respect from those who participate and, by the end of the season, that respect is returned in kind. It is one of those experiences where you can look back upon and see the growth that took place.

Dan Lutz, the director of the marching band, figures that people are drawn to the marching band because, “music touches almost everybody’s soul.” Dan elaborates, “Most activities, sports for example, are discriminatory based on talent level or physical prowess as is true of the purely musical aspects of musical ensembles.  However, with a marching band there are more factors at play that there will be a place for everybody.” Nearly half of the band members are non-music majors, myself included. While music may be the hook for most, the other qualities of the individual also matter more.

“I appreciate how many facets of marching band there are,” says Michael Powderly, one of the field conductors for the marching band, “there’s no lack of work, there’s always something to be done.” He explains that this helps to develop a sense of determination and hard work within the people who work in, with and around the band.

This level of accessibility is truly something to be commended and what the band does for its students is admirable, but the marching band also does its part to represent the university across Massachusetts and beyond. The band serves a variety of purposes for UMass Lowell through numerous parades, exhibitions and events as a means of drawing positive attention to the university. When the marching band performs, it acts as an ambassador of the university as well as a recruitment tool; if an individual’s first impression of a place is a group of dedicated, professional performers that are synchronized in their movements and actions all the while playing some great music then that is more than a good impression, it’s a lasting one.

I have been with the band since 2015 and I can say, sincerely, that it is practically life changing. Some of the strongest friendships I have made here at UMass Lowell are thanks to the marching band. The marching band also helped me through some rough patches here as well by providing a place for me to do something I enjoy, focus on other things and get support from others who have been through or are feeling the same way. It gave me the ineffable sensation of satisfaction that only the thunderous applause of a crowd can achieve that I would recommend to anybody. I grew as an individual in both maturity and character through the marching band and I will always be grateful for these changes in my life.

Why is the marching band so important to the university? In the words of dearly departed friend of Dan Lutz, “Marching band is one of the best things you can do.” Looking back now, I could not agree more.