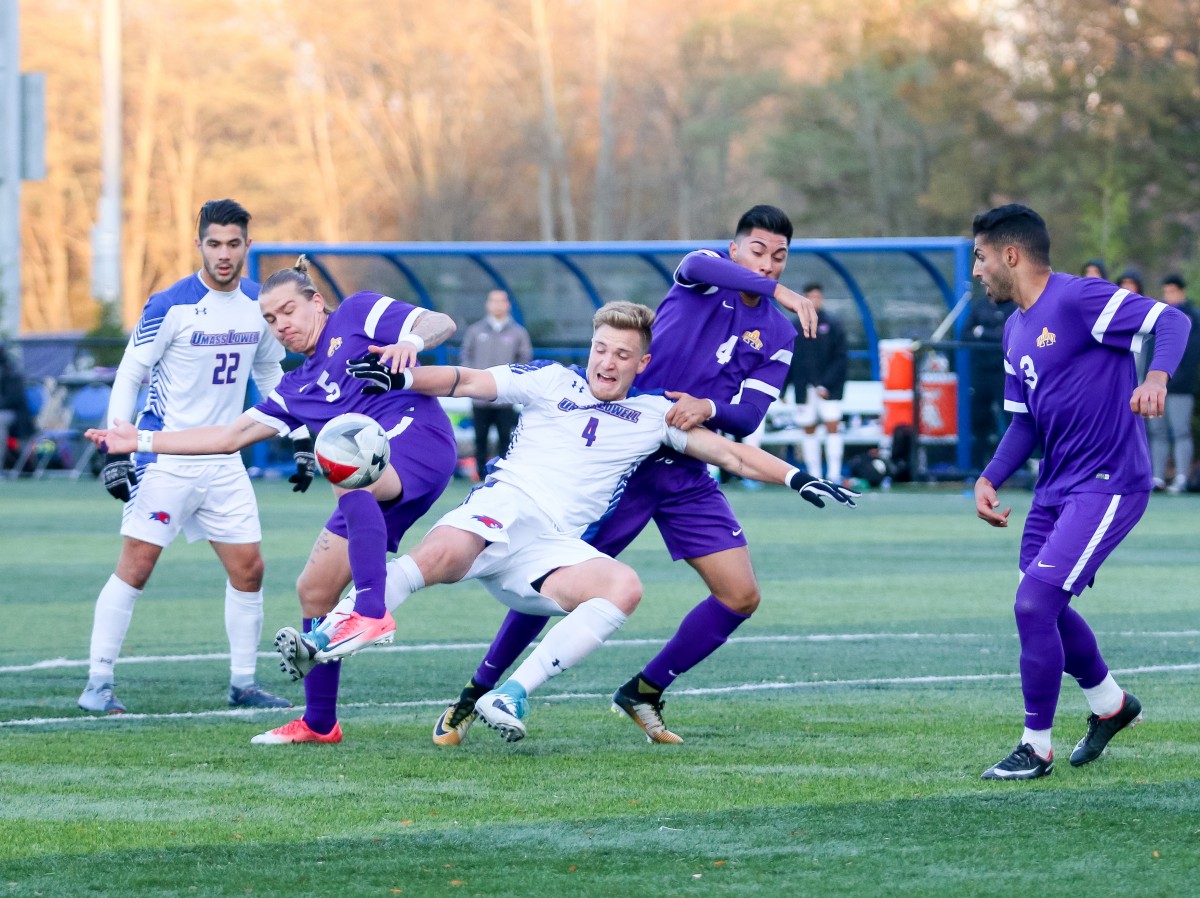 It was not until minute 102, sometime after the sun had set on the Cushing Field Complex, that the sun also set on a ferociously hard fought 2017 campaign for the UMass Lowell men’s soccer team. The River Hawks fell 1-0 to the University at Albany Great Danes following the overtime goal.

The sellout crowd, with upwards of 50 extra fans viewing from the top of the North Campus parking garage, fell silent for the first time all afternoon as a shot from the top right of the box escaped the reach of River Hawk senior goalkeeper Austin Kroll and ricocheted into the net to seal the deal.

“I thought it was a good game between two tough teams, two of the better teams in the conference. Albany did a great job of being opportunistic, and they showed that at the end with the goal in overtime,” said UMass Lowell head coach Christian Figueroa.

It was freshman midfielder Andreas Assiotis who broke the scoreless tie in the second period of sudden death overtime, and dealt the closing blow in the America East Tournament Championship between UMass Lowell and the University at Albany.

Assiotis’s championship-winning goal was the first of his career, and came off a Great Dane throw-in with an assist from junior midfielder Carlos Clark. The midfielder’s goal also clinched a spot for the Great Danes in the NCAA Men’s Division 1 Soccer Championship, which will take place later this November. The 2017 America East Championship title is the Great Danes’ second in two consecutive tournament appearances.

The down to the wire loss at the hands of the University at Albany was not the River Hawks’ first this year. UMass Lowell was bested by the Great Danes in a separate 1-0 match on their three-game road trip losing streak, the only losing streak of their 2017 campaign.

“It has been a process throughout the transition. Getting ourselves to a place where last year we competed for a regular season championship, and continue to build on that and make a tournament run,” said Figueroa. “Once you get into post season play, and the conference tournament, it gets real tough, even when you’re playing at home.”

UMass Lowell entered the tournament as the second seeded team, and bested third seed University of New Hampshire Wildcats in a 2-1 semi-final round.

The River Hawks were not the only top-seeded team the University at Albany defeated on their road to the championship. The Great Danes also managed to score a 1-0 victory over the number one seed, the University of Vermont Catamounts, in the semi-final round.

“I think they were just quick. Like I said, they were opportunistic. They get themselves back into play and play it into the box,” Figueroa said.

Following the championship loss, Figueroa focused in on the team’s competitive play in recent years and particularly throughout the Division 1 transition. Many feel a bright future awaits the full-fledged Division 1 men’s soccer team at UMass Lowell.

“It’s been a process, and I think we have got a ways to go. But we are looking forward to the future,” Figueroa said.