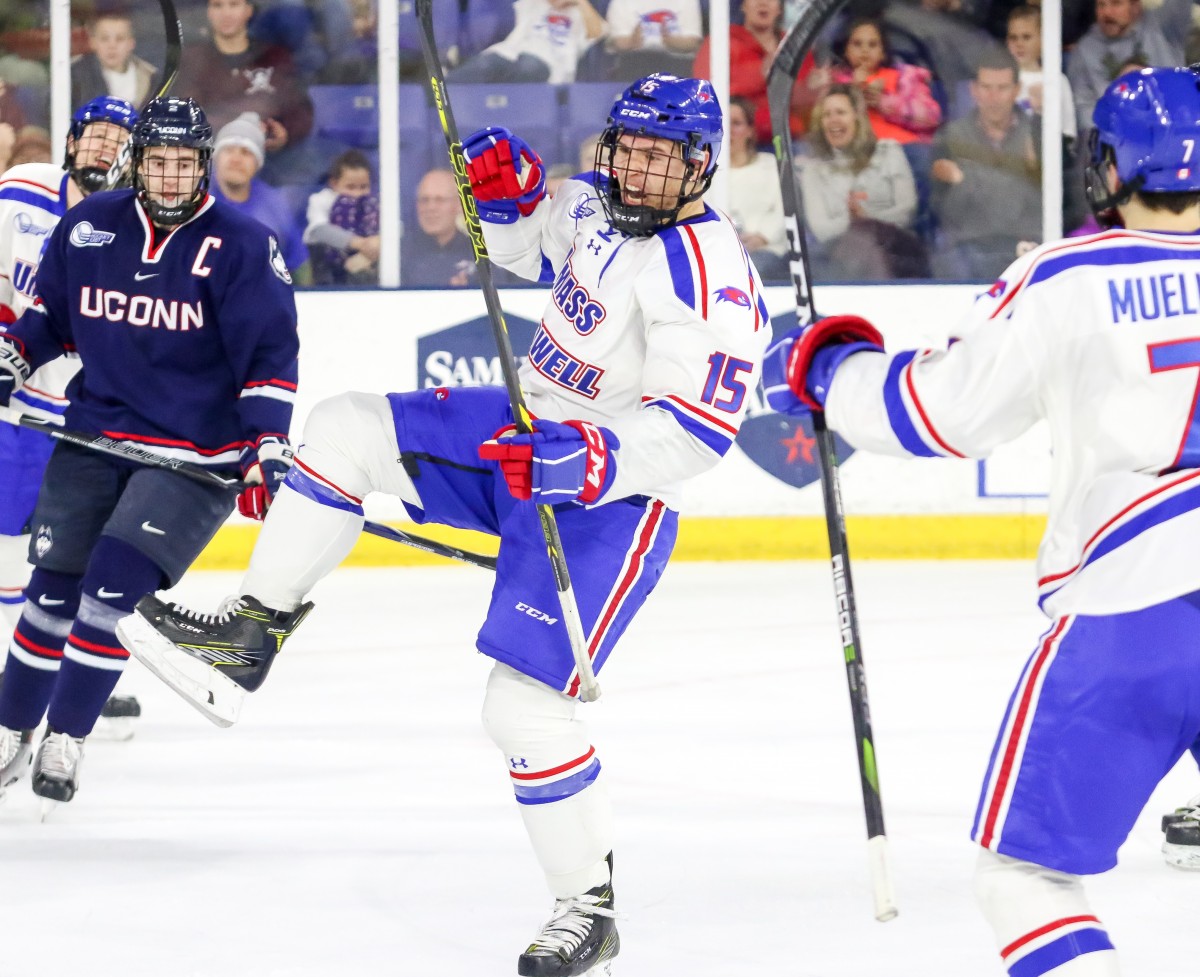 Following a perfect weekend of Hockey East conference play, a confident UMass Lowell men’s ice hockey team took to the Tsongas Center ice surface Friday night with each unit firing on all cylinders. The River Hawks overtook the University of Connecticut (UConn) to the tune of 5-2 in the first match of their home-and-home weekend with the Huskies.

“I think Lowell outplayed us in all facets of the game tonight. They jumped us early. They won the special teams game… They outcoached us. My hat is off to Lowell. I thought they played the better game tonight,” said UConn head coach Mike Cavanaugh.

The River Hawks came out of the gate early Friday night, scoring two back-to-back goals in the opening minutes.

The first goal came on the power play by way of senior forward John Edwardh, who found the back of the net with wrist shot on the rush, set up by senior defenseman Christ Forney and defenseman Tommy Panico.

The energy surrounding these early goals not only carried the team, but seemed to encourage production from around the locker room Friday.

“When you have a little bit of success, I think the guys start to feel good about themselves. You have a number of guys shooting the puck, and that is always a key factor,” said UMass Lowell head coach Norm Bazin.

Edwardh returned to the scoresheet in the second period of play for an unassisted goal stemming from a poke check by Edwardh at the point in the defensive zone.

The only players to gather more points than Edwardh Friday night would coincidentally be Dmowski and Mueller. Dmowski went on to score two goals in the third period to close out the night with three points. Mueller finished with 3 points, assisting both of Dmowki’s third period goals.

The offensive production was not, however, the only piece to the puzzle in Friday night’s triumph. Despite several minor lulls in performance, UMass Lowell put on a clinic in each facet of the game.

“We had a number of positives throughout the game,” said Bazin. “I thought we got contributions from every line… Our guys had good commitment to playing offense and defense. I think we’ve done a better job of being connected, and that has been a big part of it.”

Special teams were stellar for the River Hawks. Going perfect on all five penalty kills, UMass Lowell did a spectacular job of keeping UConn to the outside, turning away shots and breaking up passes.

Another phenomenal performance by sophomore goaltender Christoffer Hernberg was also a key factor. Hernberg had 23 saves on the night, including one terrific pad save on a second period penalty shot for UConn.

“Hernberg has been huge for us all year. He showed some great poise [on the penalty shot], and didn’t bite on the deke. It was a big momentum shift for us,” said Edwardh.

UMass Lowell’s Friday night victory secured the team’s first win over the Huskies since their 2014-15 campaign. The River Hawks go on the road Saturday, where they will take on the University of Connecticut once more on their home ice at the XL Center in Hartford, Conn.

It is a quick turnover for the River Hawks, but Bazin says this will be a big test of his squad’s ability to revert to basics.

“I think it’s very healthy to have those types of quick turnarounds, because you find out who you really have in that locker room,” Bazin said. “The simple plays are even more important in that quick turnaround… It’s going to be a good test for our team.”