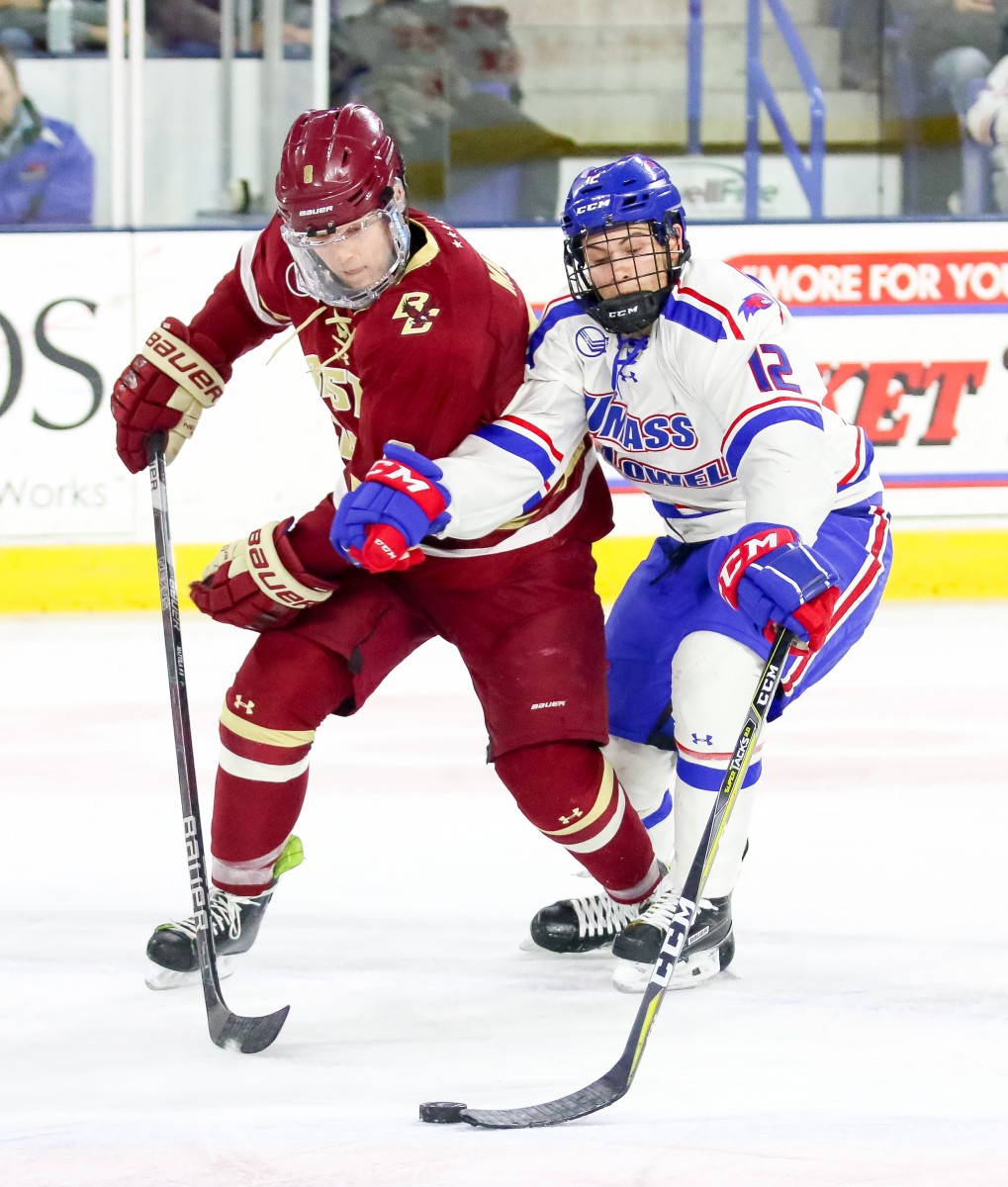 In front of a nearly sold out Tsongas Center, UMass Lowell’s men’s ice hockey team beat the Boston College Eagles 3-2 in a rematch of the 2017 Hockey East championship final.

“It was a game of momentum changes and fortunately for us we responded well and got the last one,” said UMass Lowell head coach Norm Bazin.

The River Hawks started the first period with a lot of energy and were aggressive in Boston College’s zone all period. They looked like a much different team compared to last week’s first periods where they looked sluggish and complicit.

Both teams struggled with transitioning out of their own zones. UMass Lowell took advantage of a Boston College mistake for their first real chance of the game after five minutes when a Boston College defenseman mishandled the puck, which allowed UMass Lowell junior forward Nick Master a point-blank shot at Boston College goaltender Joseph Woll. Woll deflected it into the path of UMass Lowell freshman forward Chris Schutz, who saw his open net shot blocked by a Eagles’ defenseman.

UMass Lowell kept applying the pressure and the first goal of the game almost came to them again on their second power play of the game. UMass Lowell forward Ryan Dmowski sent the puck low across Woll hitting off a Boston College defenseman’s skate and ultimately knocking against the Eagles’ post before Woll could cover it up.

UMass Lowell maintained their intensity in the second period and it paid off with two goals. The first came from senior forward Ryan Collins, who scored a wrist shot in the top right after a back-door pass from sophomore defenseman Mattias Goransson.

The River Hawks’ momentum stalled for the next 10 minutes with two Boston College power plays coming at 5:32 and 8:26 in the period. Despite two goal scoring chances by the Eagles during the power plays, UMass Lowell’s penalty killing squad did well, closing passing lines and blocking shots.

After the River Hawks weathered the storm, Dmowski expended their lead by two after blasting a shot from the right wing in to the top left of the net.

“It stood out because we got a lot of good pressure on them and the shifts we scored on were the best shifts of the night,” Bazin said.

The third period started out all in Boston College’s favor with back to back goals both scored by sophomore forward Graham McPhee. Both goals were separated by three minutes and were inside the first five minutes of the third period.

Tied 2-2 after leading 2-0, the River Hawks showed their experience in big games and with the crowd behind them, Schutz blasted a wrist shot from the right wing past Woll just over one minute after McPhee’s second goal.

For the remainder of the game, UMass Lowell comfortably absorbed everything the Boston College offense was throwing at them while having their own respective chances. The River Hawks’ cause to close out the game was further aided by a penalty on the Eagles for holding with 2:14 remaining. However, senior forward John Edwardh’s penalty for boarding made for some last-minute drama for the River Hawks. Boston College could not find the equalizer and UMass Lowell would hold on for the win, 3-2.

“We definitely have the best fans in the Hockey East, and they were behind us all night and it helped us get the win tonight,” said Edwardh.

UMass Lowell will face Boston College again tomorrow night at the Conte Forum with face-off scheduled for 7 p.m. The River Hawks return home on Tuesday, Feb 6 when they host American International in a non-conference match-up.