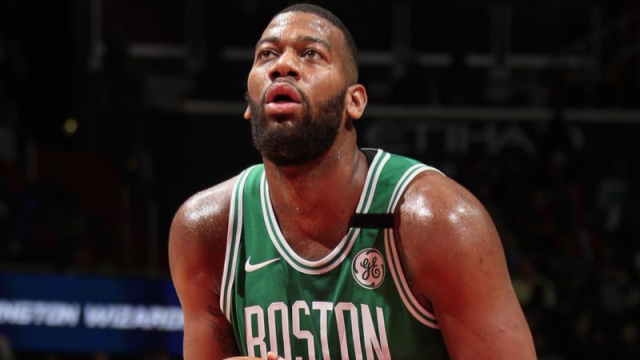 Greg Monroe previously played for the Phoenix Suns. (Courtesy of the Boston Celtics)

With the National Basketball Association (NBA) trade deadline closed as of Thursday, Feb. 8, and lots of teams making deals and signing contracts, the Boston Celtics are in a great position. Last week, the Celtics used some of their leftover money to buy out the Phoenix Sun’s free agent, center Greg Monroe.

It is far too early to say whether Monroe will stay in Boston past this season, but he will provide some low-post scoring as well as underrated passing skills as the team heads towards playoffs. Monroe has a good track record: in his eight NBA seasons, he has averaged 14 points and nine rebounds per game.

Recent injuries have left the Celtics digging into their bench squad, with guard Marcus Smart out for two weeks with a hand injury, point guard Kyrie Irving with a quad injury, and various other small injuries. Thankfully the Celtics are a resilient bunch, and the young bench players were more than ready to step up and have the spotlight.

On Wednesday, Feb. 1, in a blowout victory over the New York Knicks, guard Terry Rozier was in the starting lineup for the first time in his career, and he also recorded his first triple-double. He put together 17 points, 11 rebounds and 10 assists to become the second player in NBA history to record a triple-double in his first start.

Immediately after the game, Rozier said to a reporter, “It just worked out perfectly for me, I got to knock down some shots in the beginning of the game, [and] hit the open man. I’m always going to get in there and rebound. [It was] just a great night.”

But Rozier was just getting started. In the very next game, a 119-110 victory over the Atlanta Hawks, he recorded a new career high in points and lead the team with 31. Not far behind, Celtics rookie guard Jason Tatum scored 27 points that night, which was also a career high for him. With their star players unable to play, the Celtics bench made up for their inexperience by showing their skills and eagerness to achieve.

After the game against Atlanta, Tatum said, “You just have to be more aggressive and score. So many guys were injured, a lot of points were missing, so guys had to do more.”

Celtics superstar point guard Kyrie Irving has shown this season that he is a great mentor, and wants to lead the young team to success. He puts time and effort into providing advice and counsel to the young guys, and Terry Rozier said, “Kyrie’s probably one of my biggest supporters outside of my family through this little process.”

Besides acquiring Monroe, there were rumors that the Celtics were going to trade guard Marcus Smart. But as the trade deadline approached and passed, the Celtics front office stayed quiet. So, as the rest of the NBA scrambles to make last minute trades, Boston sits content with a treasure trove of draft picks and trade assets, as well as a young motivated team with unlimited potential.