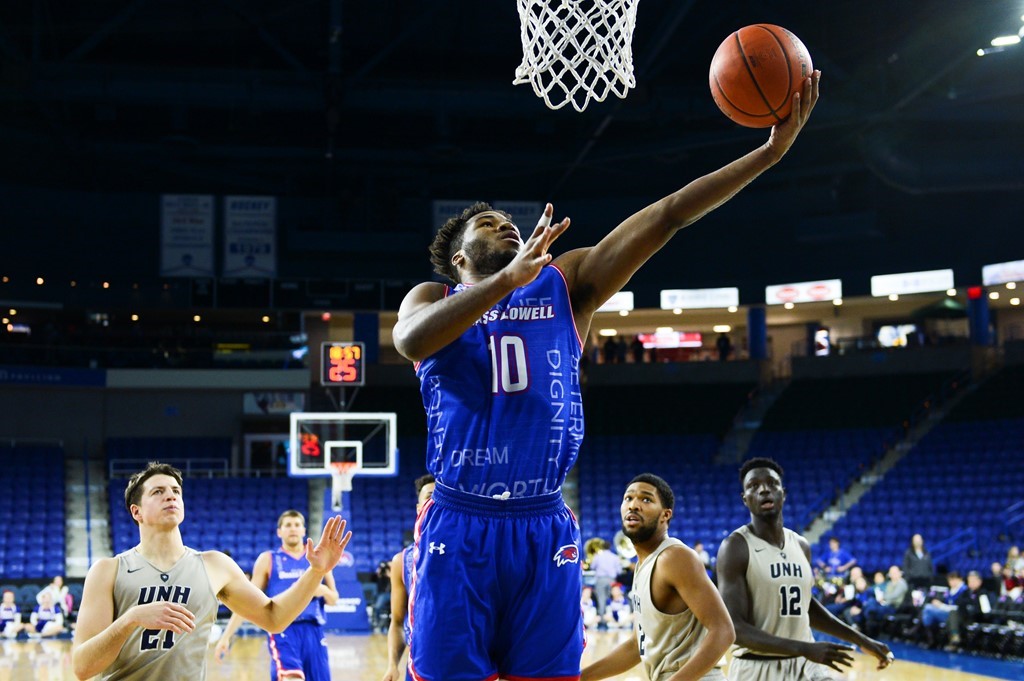 On Wednesday Feb. 21 the UMass Lowell men’s basketball team notched a commanding victory over the University of Maine Black Bears. The final home game of the season was also Senior Night, and senior guard Jahad Thomas led the team to victory with 26 points.

The first half was fast-paced and competitive. Both teams played hard defense, resulting in both sides having five team fouls with 8:00 left in the first half. The Rive Hawks led a fast-paced offense, using picks at the top of the key to force backdoor cuts and get players open at the 3-point line.

The River Hawks defense was not as good in the first half, but their rebounding was strong, and the Black Bears were missing a lot of open 3-pointers. Senior guard Matt Harris hit a deep 3-pointer just before a timeout seven minutes into the first half.

In the first half, junior guard Ryan Jones was on fire. He scored 19 points and hit four 3-pointers. Halfway through the first half the score was 26-24 with Maine owning the lead, and the game continued to be back-and-forth and high energy. With three minutes left in the first half, Maine sophomore guard Dennis Ashley scored a 3-pointer to tie the game at 41. Then, a steal from sophomore guard Rinardo Perry of UMass Lowell and a 2-pointer by junior guard Ryan Jones put the River Hawks up 44-41.

With one minute left in the first half, Thomas made a layup and finished the half with eight points. The River Hawks were up 47-43 at the end of the first half.

The Black Bears played tough on defense, getting multiple steals and blocks leading to scoring on the offensive end. Jones held them off on the UMass Lowell defense, and he also commanded the River Hawks’ offense by hitting multiple shots.

In the second half, the Black Bears offense started to struggle, and they missed lots of open shots. They pushed the pace of the game but were not able to convert on the offensive end. The River Hawks buckled down on defense and began to get steals and blocks, leading to transition scoring on the other end.

Maine got into early foul trouble in the second half, collecting five fouls not even three minutes into the half. The River Hawks started to move the ball on offense, and Jones and Thomas were working well together to add to UMass Lowell’s lead.

Thomas finished the night with 26 points and 11 rebounds. He got into a strong offensive rhythm in the second half, and was able to get into the paint and score with relative ease. Jones’ 3-point shooting cooled off, but he took less shots and spread the floor to get his teammates open. He finished with 24 points, 6 assists and 5 rebounds.

Junior Aaron Calixte, the starting point guard for the Black Bears, led the team with 18 points, 5 rebounds and 6 assists. He excelled at pushing the pace of the game and provided strong passes to get his teammates open shots. Off their bench, junior guard Vernon Lowndes Jr. scored 16 points and had 6 rebounds and was able to provide some scoring when their team needed it.

Despite the Black Bears’ best efforts, the River Hawks began to stretch their lead towards the end of the second half. The River Hawks closed out the game 88-76 to improve to an 11-16 record. UMass Lowell will finish the regular season with two away games next week.