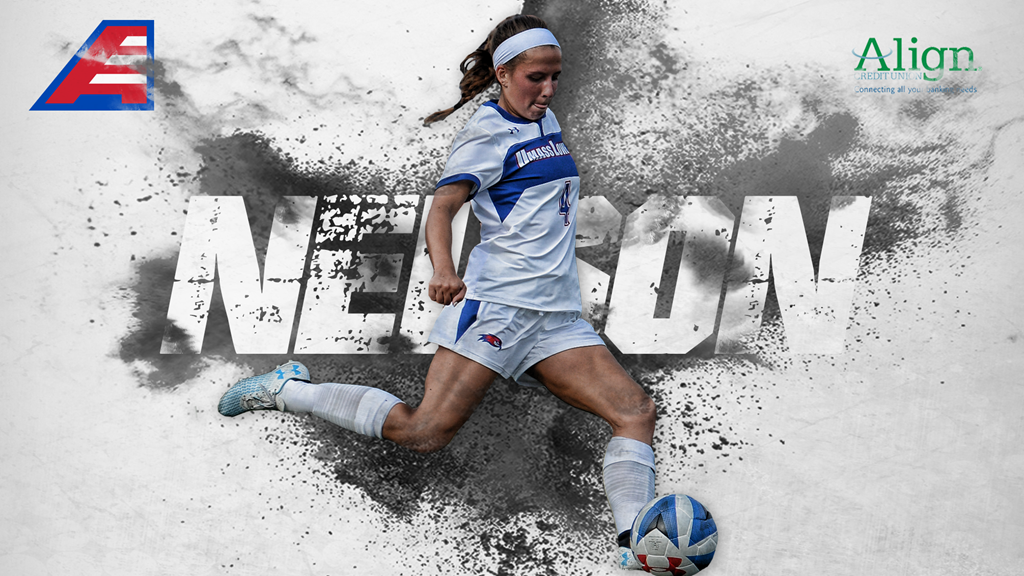 Both on the statistics sheets and on the field, freshman midfielder Emily Nelson is an emerging offensive powerhouse in the UMass Lowell women’s soccer team’s arsenal. Second in goals and points only to last year’s River Hawk scoring leader, senior forward and captain Rachel Morrier, Nelson is making a name for herself in Division 1 women’s soccer.

“She’s the type of player that, even over the last two years before she showed up here, took her game to the next level and developed immediately when she stepped on campus in August. She gets better every day; every game… I really want to help her to develop into one of the best players in the conference.” said UMass Lowell women’s soccer interim head coach Mira Novak.

It is no surprise Nelson was one of the first players the River Hawks recruited for the Class of 2022. Credited with 95 goals and 42 assists in her career at Peabody Veterans Memorial High School, Nelson was conferred with numerous accolades in her high school soccer career.

“I started as a freshman on varsity [in high school], and I think that was a similar transition. Obviously at that point I had never played with the bigger and stronger girls. It’s similar here. I wasn’t used to the style of play and the speed of the girls here. It was a tricky transition, but the team and coaching staff made it really easy,” said Nelson.

Despite any nerves or reservations, the breakout freshman midfielder did not hesitate to showcase her talents as she transitioned into a key role in a D1 program. With three goals in three games last week, Nelson earned the first major accolade of her college career; the aforementioned America East Rookie of the Week Award.

“I knew it was an award the America East gives out, but I really had no expectation of getting it. So, it was amazing when [UMass Lowell Athletics] sent it to me. It was just really cool to see,” said Nelson.

Athletics and awards were far from the only things on Emily Nelson’s mind when she began looking at colleges to pursue studies in the field of biomedical engineering.

In fact, throughout her high school career Nelson kept a spotless academic record. In the PVMHS Class of 2018, she ranked 17th in academic achievement and graduated as a member of the National Honor Society. Alongside outstanding achievement on the field and inside the classroom, Nelson would also develop a love for community outreach through volunteering alongside her teammates in high school.

It was these academic and human interests, the advantages of a renowned engineering program and a passion for helping others, that lead the high school soccer star to set her sights on UMass Lowell.

“Having the engineering program and soccer was the best combination I could ask for… In the end, I want to work for a medical device company; to create, test and design medical devices for surgery and the human body. I just want to help people, but I hate blood and all that. For me, this is the way I can help people without being in a hospital,” said Nelson.

These drives and passions coupled with her on the field work ethic make Nelson the type of personality people gravitate toward and Coach Novak could only refer to her as a “person of incredibly high character” and a “high achiever.”

And Nelson’s teammates can attest.

“She’s a hard worker… Respectful… talented… generally a sweet and amazing to be around,” for senior goalkeeper and co-captain Julia Schneider the list went on and on.

Another of the team’s many high-achievers, Schneider knows all too well the struggles of a student juggling the role of a Division 1 starting athlete with that of a UMass Lowell engineering student. And despite assuredness that Nelson would transition as well in her classroom endeavors as she has on the field, Schneider had words of wisdom for her young teammate to carry throughout the college experience.

Only time will tell what UMass Lowell’s engineering program and the America East Conference have in store for Emily Nelson in the years to come. But with such strong support behind her, and so bold a drive within, it is hard to see Nelson going anywhere but up from here. If previous performance is any indicator of future potential, Nelson’s stunning track record is convincing evidence for a blindingly bright future.

Nelson is exemplary of the hard-nosed attitude UMass Lowell is synonymous with, and of what the university has recently defined as what it means to be a true River Hawk. She brings far more than just her offensive athletic capabilities to the university.

She simply stands poised at this pivotal point in her life to be a true difference maker in anything she sets her mind to.