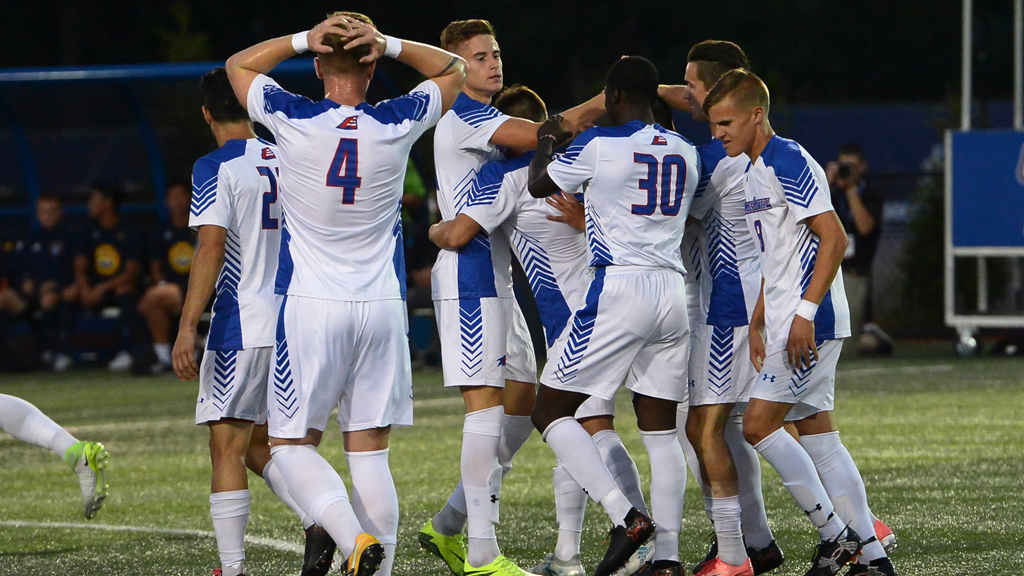 The UMass Lowell men’s soccer team (6-1-2) shutout the Vermont Catamounts (6-3-0) 2-0 on Saturday night at Cushing Field. The River Hawks earned their sixth shutout of the year in their first America East matchup of the season.

“It was a tough game today. We gave it our best. [We] had very good chances. Overall, [we] got the shutout. We’re at home and we [started] off the conference on the right note with a win,” said UMass Lowell head coach Christian Figueroa.

Vermont seemed more than capable enough to get their first points on the road this season early with chances by the Vermont forwards who each had opportunities to add their names on the score sheet, but their shots were well defended by the River Hawks defense. Vermont was the superior side early on.

That was until UMass Lowell took the lead ten minutes into the game with a quick attack beginning with a through ball wide from junior midfielder Roko Prsa to the team’s leading scoring, redshirt senior Stanley Alves, assisted on freshman Renato Kauzlaric’s first goal of the season beating the diving keeper.

Prsa did well in defending, as well as initiating UMass Lowell’s offense. The team flourished when creating chances through Prsa. The team followed his leadership and put pressure on the ball throughout the game.

“Yeah. He’s been great. He’s been great all during training all week. We have two keepers that are really pushing. Each that we can trust regardless of who’s in there. You’re bound to have some success,” said coach Figueroa.

The UMass Lowell faithful were given an absolute performance of the season display by keeper Gujic. Gujic saved six shots and provided four crucial stops in the second half.

The Catamounts gave UMass Lowell a tough second half, forcing the Riverhawks to make key blocks while trying to score on the break. Prsa regained possession and began the counter attack with 12 minutes to go in the game. Sophomore Mayale Malango finished off the match with an unassisted goal his first of the season as well. The lead was never in doubt with the form Gujic produced.

“I was waiting on it for a long time. It was a great feeling. A tough game.” said Gujic of his first start at Cushing Field. “I always think about the next play. This is a talented group. Every single one [of us] on the team]. [From] players that came in, players on the bench, we are very talented. I think we can go far. We are all good friends. We are basically a family with a great coaching staff,” Gujic said.

The UMass Lowell River Hawks will continue play on Tuesday night as they face Holy Cross at 7 p.m. at Cushing Field.