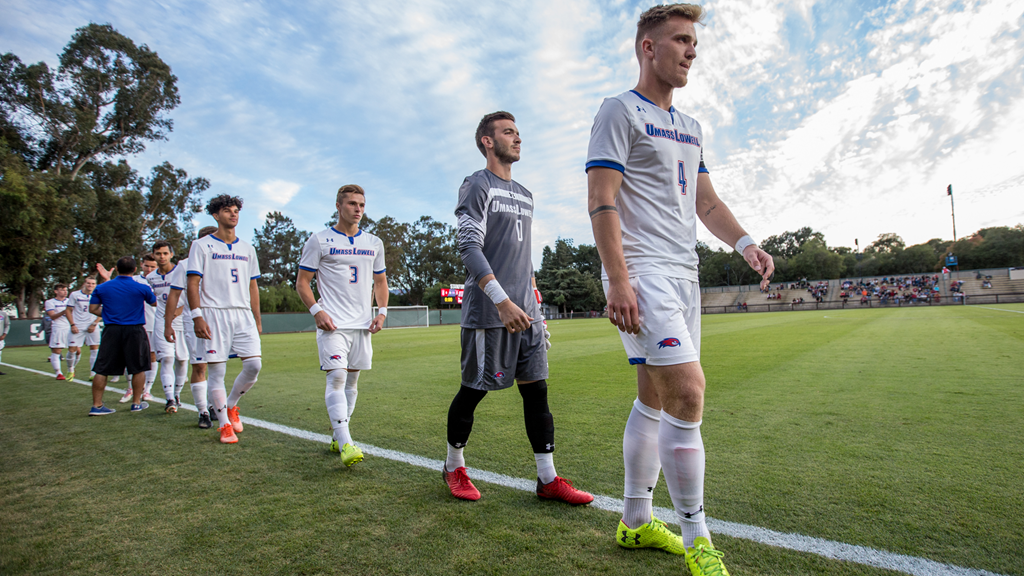 Coach Figueroa didn’t have many words to say after very close loss to an out of conference team. The River Hawks came into the game coming off terrific performance against America East rivals Vermont beating them 2-0. The River Hawks looked to perform another solid defensive showing as they have all the season after a few changes to the lineup.

The River Hawks had seven shots in the first half marking a favorable start to the game. Junior midfielder Roko Prsa had a total of five shots for the game. Freshman forward Renato Kauzlaric and senior forward Ivan Abramovic both chipped in two shots as well.

The Crusaders could not find the net in the first half going without a shot on target. Senior goalkeeper Zach Rowell stood firm with redshirt junior back Chas Reichenberg playing ahead leading the backline.

Holy Cross goalkeeper Henry Stutz had a solid performance while being out shot by the River Hawks 13-9 for the game. Stutz was called into action in the first half producing two saves from junior forward Alejandro Osorio and senior forward Jakov Basic.

Both teams had four corner kicks and created chances with each opportunity. Kauzlaric had a chance to put the River Hawks up 2-0, but his shot went wide.

One of Crusaders’ corner kicks ended up hitting one of the River Hawks defenders on forearm. The referee proceeded to call a penalty. Crusader midfielder Max Krause stepped up and scored the equalizer. UMass Lowell goalkeeper Zach Rowell dove the right way and made contact with the ball but could not stop the penalty shot.

The River Hawks looked for the winning goal with time running out. A lost possession in the midfield resulted in a quick counter attack for the Crusaders. Holy Cross drew a foul from the UMass Lowell midfielders from 25 yards out with five minutes to go.

The UMass Lowell wall made contact with Krause’s free kick and caused the ball to deflect to the other end of the net in the left corner from where Rowell was diving. Holy Cross scored off another set piece and went up 2-1 over UMass Lowell.

The River Hawks did not have enough to time to find an equalizer and lost to Holy Cross 2-1. The loss marks the team’s first home defeat of the season.

UMass Lowell’s non-conference schedule concludes and the River Hawks will move on to a key America East matchup this Friday night against Stony Brook at 7 p.m in Long Island.