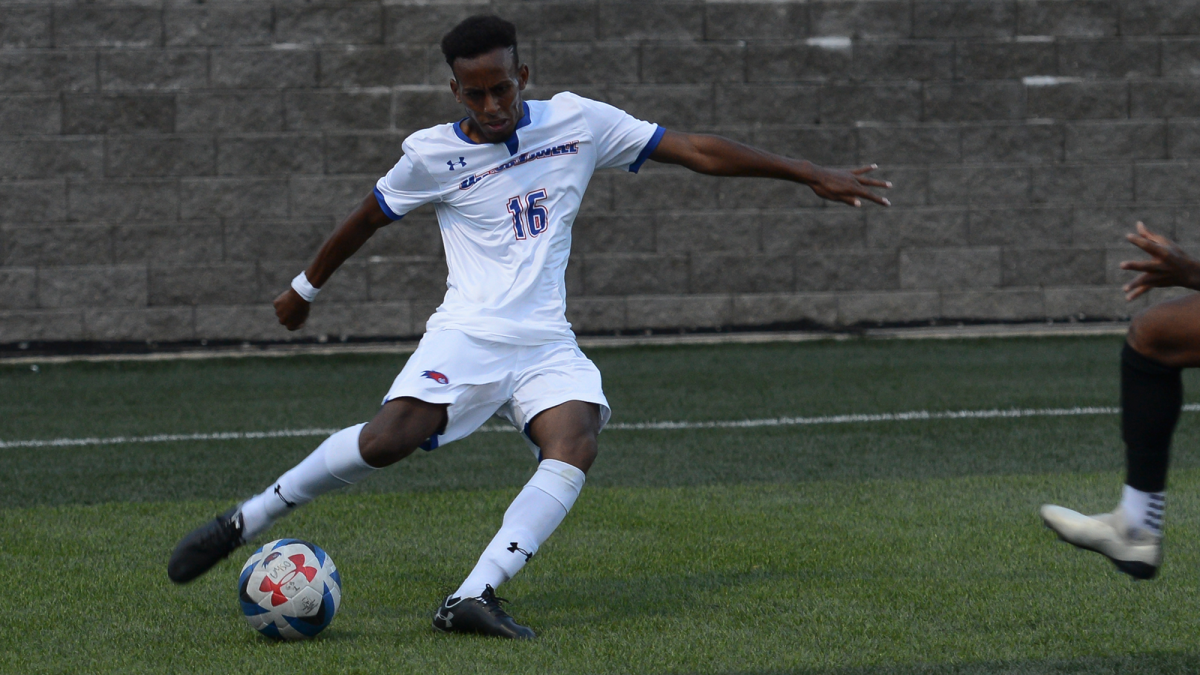 The River Hawks will try to continue their good run of play at UNH. (Photo courtesy of UMass Lowell Athletics)

The UMass Lowell men’s soccer team ( 8-4-2, 3-2-0) defeated (5-9-0) the UAlbany Great Danes 2-0 on Saturday night to pick up a key victory against an America East opponent. The River Hawks are seeking postseason play as the regular season is two games away from concluding.

The River Hawks came into the America East matchup coming off last week’s victory against conference opponent Binghamton. The home side started off with an impressive defensive first half that stopped the Danes from having a shot on target. Senior goalkeeper Zach Rowell stood confidently throughout with good communication with his back four.

Offensively the River Hawks were being led by redshirt junior forward Stanley Alves, redshirt senior Ivan Abramovic and pulling from the midfield as always, junior Roko Prsa. The first goal would come early in the first half. A half that tallied seven shots from the hosts making Danes goalkeeper Danny Vitiello into a serious work load early forcing him into saves. Forward. Alves finished the game with four shots while midfielder Prsa and forward Abramovic both had two respectively. Alves was able to get on the score sheet close to the half hour mark.

“Yeah it was great to have him back on the [scoring] sheet,” head coach Christian Figueroa said. “He’s been very unlucky to not have found the back of the net these past few games so it was good for all of us to score again.”

UMass Lowell recovered possession in the middle and continued through the right flank via sophomore midfielder Abdi Sharrif-Hassan. Hassan has been a pivotal playmaker all season with crucial deliveries in the air and on the ground. Sharrif-Hassan crossed a ball from the right corner where a jumping Alves delivered a precise header into the bottom right corner of the net. His fifth tally of the season.

“I thought the guys came out pretty strong tonight and they were focused,” said coach Figueroa. “It was good to get the goal in the first half, we’ve been talking about that a lot over the last couple of weeks, as it puts us in control and we were able to manage the rest of the game.” As the second half kicked off, players off the UMass Lowell bench began to warm up as substitutions would be made. The team’s depth has been a staple all year, with different players stepping for major parts of the contest.  The home side continued keeping position and looking for the second goal to double their lead. At the 70 minute mark, junior defender Ivan Baskic was able to head home a free kick from senior midfielder Jakov Basic from 25 yards out.  It was Baskic’s second goal of the season.

Zach Rowell was able to complete his sixth shutout of the season while finishing off with three lates saves in the second half.

The River Hawks will face New Hampshire in Durham on Oct. 26 at 7 p.m. for their final road match up of the year. Senior Night will be scheduled for 7 p.m. on Wednesday Oct. 31.