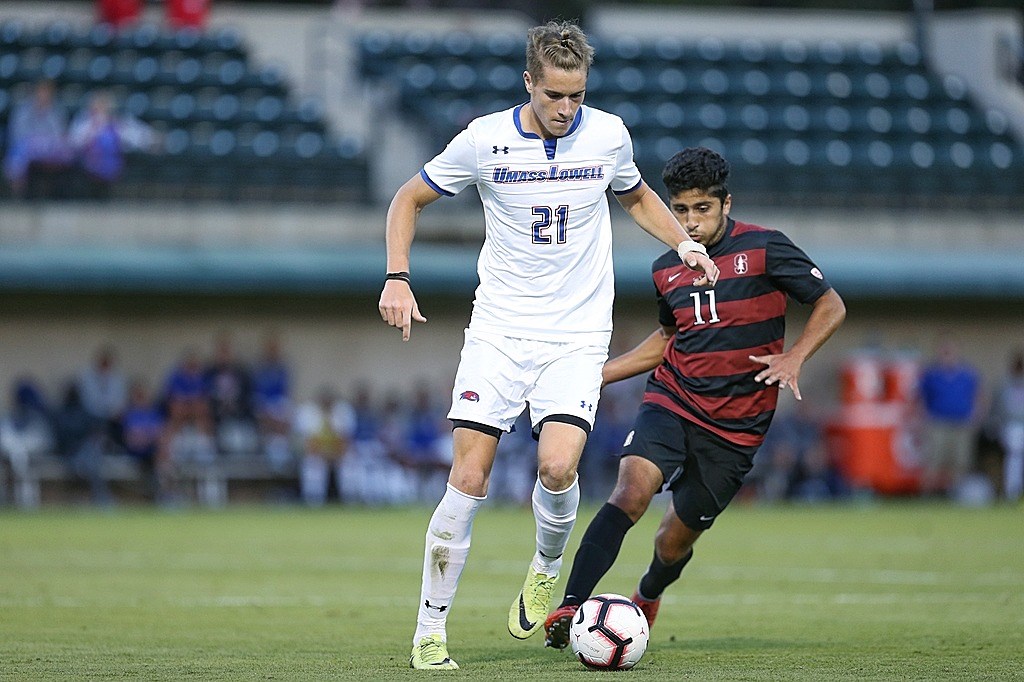 The River Hawks will look to rebound in Senior Night vs. Hartford (Courtesy of UMass Lowell Athletics)

The UMass Lowell men’s soccer team (8-5-2, 3-2-0) fell to America East conference rivals, the University of New Hampshire Wildcats (9-3-2, 2-0) on a cold fall night at Wildcat Stadium in Durham, New Hampshire. The Wildcats were celebrating their senior night on Friday night, and UMass Lowell played in their final road matchup of the regular season.

The game began with both sides fighting for possession and trying to set a tempo. The River Hawks wanted a slow tempo so they could dictate the passes in the midfield while the Wildcats wanted a faster tempo enabling them to run out into open space for scoring opportunities.

An early cross from River Hawk senior midfielder Jakov Basic was well defended by the Wildcats defense. UNH continued to put pressure on the River Hawks back line with a through ball that beat UMass Lowell goalkeeper, freshman Patrik Gujic. Luckily for the River Hawks, reliable senior defender Franky Martinez was there to clear the ball from the line.

Goalkeeper Gujic helped the score line as much as possible completing two acrobatic saves denying the Wildcats an opener with the teams approaching twenty minutes of play.

Turnovers played a pivotal part with the River Hawks being unable to perform in the final third. A turnover would play a pivotal part in the first goal for the Wildcats as UMass Lowell would lose possession in the midfield and were attacked through the right flank.

A dangerous cross on the ground saw a UNH forward alone, where his right footed shot past the diving Gujic. After 28 minutes of play UNH went up 1-0 over UMass Lowell.

With halftime approaching, the River Hawks were still looking for their first shot on target when came a free kick for UNH on the left-hand side of the final third. A cross in the air that saw a UNH player flick the ball inside the six enabling one of their forwards to slot it in. The Wildcats took a 2-0 lead at halftime and never looked back.

UMass Lowell attempted to turn the score in the second half, but it was too little too late. The midfield trio of senior Basic, junior Roko Prsa, and junior Dario Jovanovski attempted to start the River Hawks offense finally with the team creating good opportunities to get on score sheet but UNH defended well.

Senior forward Ivan Abramoivc was hustling and putting pressure on the UNH back line trying to create a crucial turnover that the visitors needed. However, it was too little too late for the River Hawks.

UMass Lowell were not able to find many scoring opportunities being outshot 5-14 by the Wildcats. Gujic made eight saves in the match to hold off UNH’s 10 shots on goal.

The River Hawks will finish their regular season with the celebration of senior night in their final home game this Wednesday Oct. 31 at 7 p.m. at Cushing Field vs America East opponent Hartford. UMass Lowell finishes their road schedule with a 2-4-2 record but hold a 6-1 record at home.