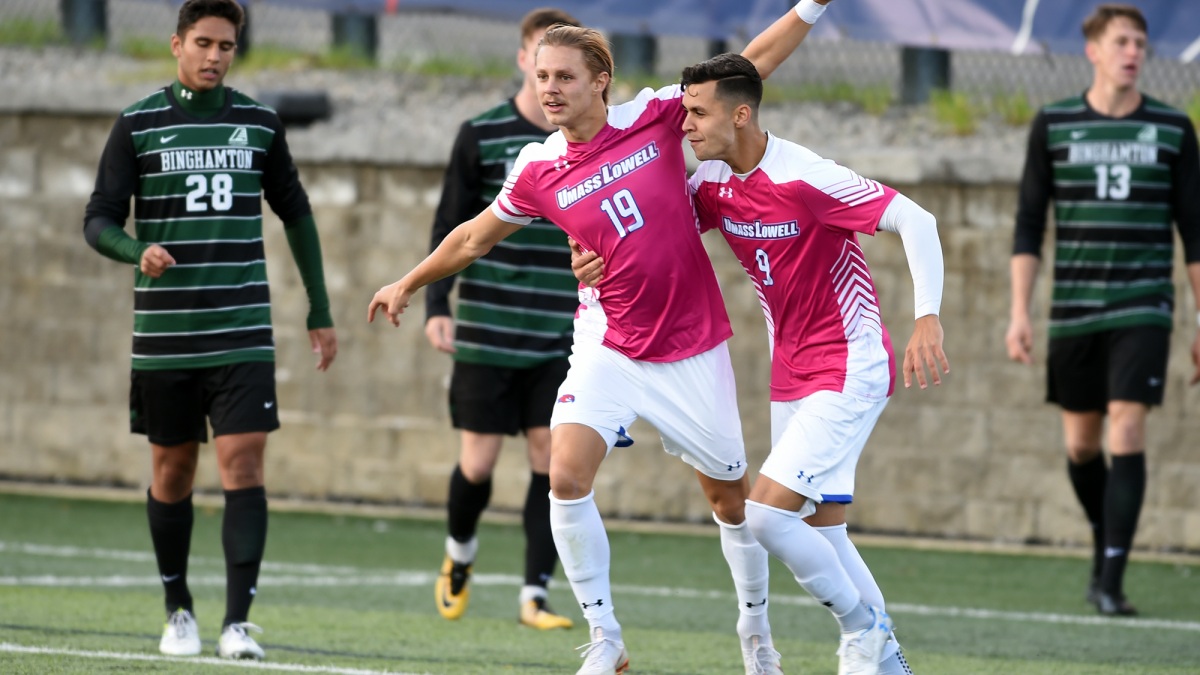 The UMass Lowell Men’s Soccer team (7-4-2, 2-2-0) defeated the Binghamton Bearcats (3-8-2, 2-2-0) 3-0 to snap their losing skid on Alumni Day. The win marks their second against an America East opponent. The River Hawks were sporting their pink breast cancer awareness jersey in support on Saturday afternoon at Cushing Field.

“I thought the guys came out focused, ready to get that early goal and set the tone,” head coach Christian Figeuora said. “It was something we talked about all week at practice and before the game. Setting the tempo always helps this. Getting those two quick goals midway through the second half really changed things for us.”

Beginning with early pressure on the Bearcats defenders, the River Hawks had control the majority of the contest. The hosts got their goal within the first five minutes. A play starting with great vision from junior midfielder Dario Jovanovski. He found senior forward Ivan Abramovic, who unselfishly dished out an assist to streaking midfielder Roko Prsa for the finish. That was the junior’s fourth goal of the season to go with his three assists coming into the game.

The Bearcats looked for an equalizer with various opportunities from right midfielder Noah Luescher and target forward Nikos Psarras. The River Hawks stood strong while blocking shots – frustrating the visitors.

Sophomore defender Giuseppe Granara and fellow sophomore midfielder Hassan Shariff were playing stand out defense for the River Hawks. While being out shot five to three but neither goalkeeper with a save, Lowell headed into the break leading Binghamton 1-0.

Early in second, the River Hawks were strong contenders for a second goal with two opportunities being created by UMass Lowell midfielder Prsa. He gave a through ball for both sophomore forward Mayele Malango and midfielder Javanovski. Both were unable to capitalize with both shots going wide of the net.

The hots were able to double their lead during the 61st minute of the contest with a goalie turnover. Pressure form Prsa and other forwards enabled Abramovic to rob Bearcats goalkeeper Chris Shutler of possession, and score his second goal of the season.

The hosts didn’t have to wait too long for a match deciding third goal as midfielder Javonovski crossed a ball into the box. In a crazy turn of event, it would bounce off a defender back to him enabling Javonovski to one time it into an open net. Goalkeeper Shutler had already dove.

The River Hawks were not contentas they finished the contest with continuous pressure applied by forward Malango and senior midfielder Jannick Baumer to finish off the game. Senior River Hawk goalkeeper Zach Rowell was able to keep a clean sheet throughout the contest, as he snagged a few saves along the way.