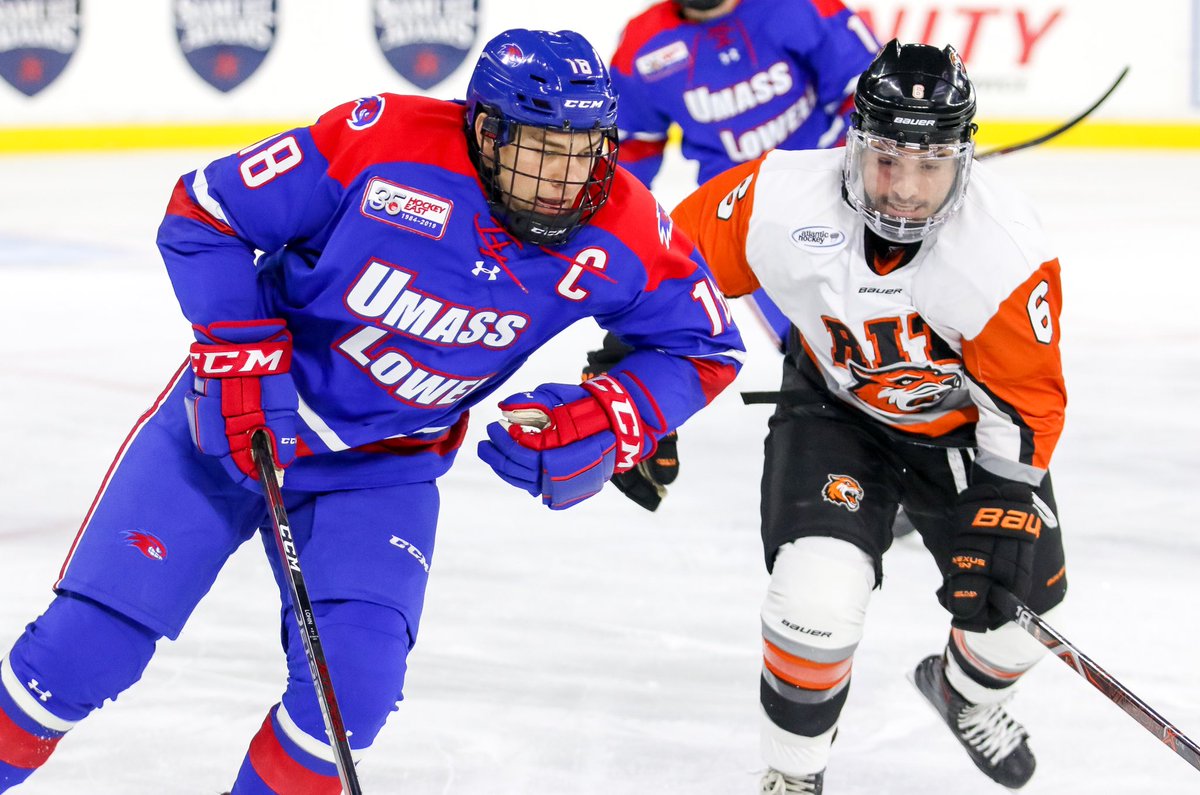 Saturday’s River Hawk Homecoming rematch between the UMass Lowell River Hawks and the Rochester Institute of Technology Tigers was no defensive chess match. With nine goals scored, and the lead changing hands three times throughout, the River Hawks’ second game of the regular season shaped up to be a comeback story late in the game – but UMass Lowell fell to RIT just 44 seconds into sudden-death overtime at the Tsongas Center.

“It probably wasn’t a game that either coach was particularly proud of,” said Wayne Wilson, head coach for the RIT men’s ice hockey team.

It was a game that kept the UMass Lowell fan section at the end of their seats without a doubt.

“It was another exciting hockey game… Exciting for the fans that is. Maybe not as much for the coaches. But that’s early season hockey. Lots of momentum shifts, lead changes,” said UMass Lowell head coach Norm Bazin.

Improving on their slim 2-1 victory over the Tigers Friday night, the River Hawks got off to a much quicker start Saturday.

UMass Lowell outshot RIT at a 12-8 margin in the 1st period of play, and by a far wider 42-30 margin by the time the game was in the books. In their quick first period, the River Hawks managed to score twice in 32 seconds and carry a 2-0 lead into intermission.

The first goal came from the stick of junior forward Kenny Hausinger, who would go on to score once more in the 3rd period, assisted by senior forward, and captain, Conor Wilson and freshman defenseman Seth Barton.

Wilson would create another goal seconds later, lending a helper to freshman forward Sam Knoblauch for his first career goal. Barton would also secure a second assist later on in the final period of regulation play.

The River Hawks would hold a strong 2-0 lead as they headed into the 1st intermission, but that would be the end of UMass Lowell’s scoring for some time. RIT would in return lay claim to the entirety of the second period of play, scoring four unanswered goals and forcing the River Hawks to climb their way out of a 4-2 hole in the final period.

“Most of our turnovers happened on the offensive blue line, and that’s a real no-no. Usually what happens is that comes right back down your throat, because the guys are changing… One of the goals, I think four of our guys changed at once… We committed some particularly egregious turnovers,” said Coach Bazin.

Turnovers seemed to be the name of the game in the 2nd period and, unfortunately for the River Hawks, in overtime as well.

Perhaps even more notably was the Tigers’ game-winner, which was scored when Jake Hamacher forced a turnover as UMass Lowell exited the defensive zone and managed to center the puck to fellow sophomore forward Alden Dupuis to end things just 44 seconds into sudden death play.

Hamacher had also happened to assist the first Tigers goal, just minutes into the 2nd period when he snapped a pass to junior forward Jordan Peacock in front of the UMass Lowell net to start the four-goal charge for RIT.

Other Tigers notables included junior defenseman Brody Valette, who came away with two important assists, senior forward and captain Abbot Girduckis, who scored two goals of his own, and of course sophomore netminder Logan Dackett.

Along with stopping 22 phenomenal UMass Lowell shots throughout the game, Dackett also made the scoresheet with an assist on the Peacock goal.

Despite the heartbreaking loss, Coach Bazin cited the hard work to tie the game and push RIT into overtime as a strength. One of many strong aspects on Bazin’s mind following the game.

“We’ve got some good things in the locker room… I liked the energy. I was happy for some of the freshman who were able to contribute for the first time… There’s a lot to like,” said Bazin.

The 3rd period comeback started with the returners but became a team effort. The Hausinger goal, assisted by senior forward Ryan Dmowski and sophomore forward Charlie Levesque lit a fire under the team.

A fire that would be carried on by the younger players. One of who was freshman forward Reid Stefanson, who’s game-tying goal was also the first of his career. The goal was assisted by Barton, a fellow freshman, as well as junior defenseman Mattias Goransson.

The young River Hawks team will look to improve on their 1-1 weekend with RIT next weekend on their first road trip of the 2018-19 season, where they will twice take on Miami University in Oxford, Ohio.

Their first match with Miami will take place on Friday, October 19th at 7:30 p.m.