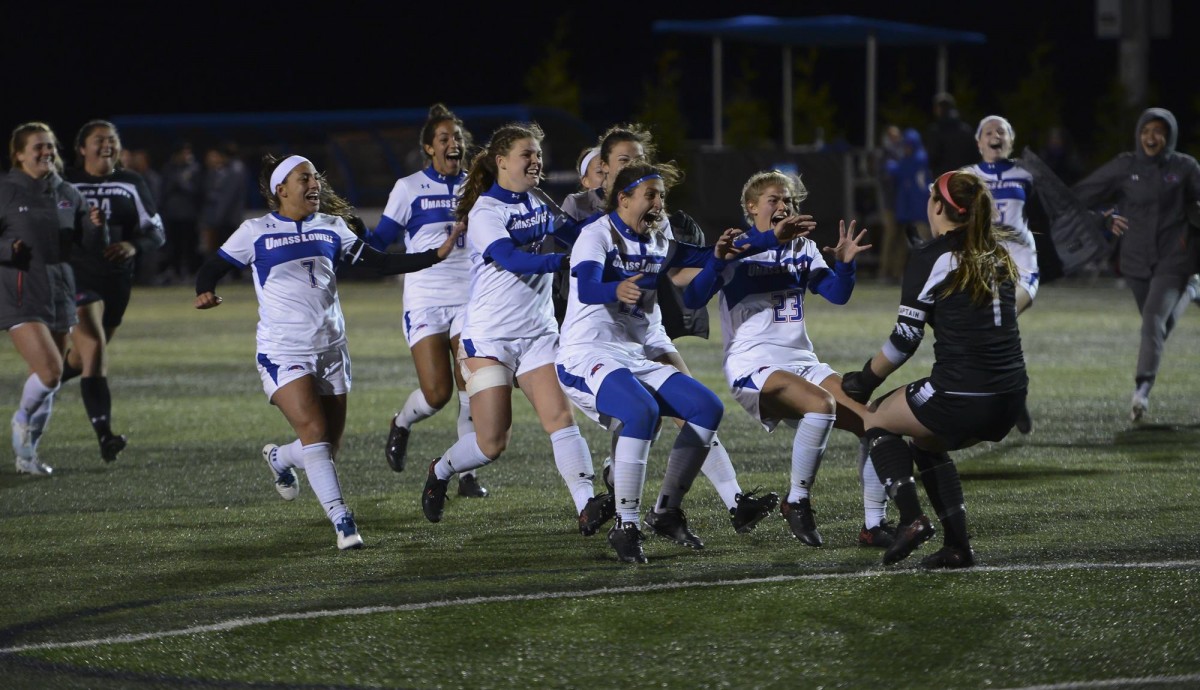 Fans were on the edge of their seats Thursday night at Cushing Field as the women’s soccer team climbed to victory over the Vermont Catamounts in penalty kicks for a 0-0 (4-3 PKs) America East Quarterfinal result.

“It was a long day. A long game. The team was so excited to be in this game. It was evident from the first minute – they got after it. They were hungry to score. They wanted to win it,” said UMass Lowell head coach Mira Novak.

UMass Lowell labored through a whirlwind October to close out the 2018 regular season for a chance at the America East Championship.

The River Hawks clinched their first America East playoff bid in program history. Their stellar late-season performance resulted in a 6-8-4 record in the regular season and brought them to a strong 4-3-1 conference record.

Thursday’s game may have appeared close on the scoreboard, but the River Hawks’ veterans and freshman alike contributed to a clinical performance. UMass Lowell controlled possession for the majority of the 90-plus minute overtime nail biter and dominated shot attempts by a jarring 35-3 margin when all was said and done.

“I was really proud of the team and how they responded. It was just a different energy about the team today. They didn’t want to waste a shot, and I don’t think they did,” said Novak.

Yet, for their efforts, UMass Lowell could not find the back of the net in regulation. Copious scoring opportunities for the River Hawks seemed destined for the crossbar. Of 18 shots in the second half, many found the pipes; among the players denied by the posts were senior captains Katelyn Vieira and Rachel Morrier.

Regardless of aid from the posts, both goalkeepers appeared phenomenal with breath-taking saves at key moments.

Despite making only three starts on the year, Catamount freshman goalkeeper Lydia Kessel kept Vermont in contention with 14 saves on the night – just three less than her regular season save total of 17 – and keeping the River Hawks off the board in regulation and two overtimes.

“Julia just turns into a different player when it comes to high-pressure situations. She showed that today,” said Novak.

UMass Lowell senior goalkeeper Julia Schneider made the save of the game redirecting the shot of Catamount senior midfielder Savana Yurick into the post to give the River Hawks a chance to walk away with the quarterfinal match in penalty kicks.

UMass Lowell had to battle through a tougher look from UVM in the second half of regulation to push things into overtime and win in penalties. Following a lackluster start, the Catamounts came out of intermission at full speed. They possessed the ball for several of the opening minutes and managed two shots on net.

“For [UVM] after that first half they really had to do something. They came out really strong in the second. I give them credit for changing a few things and trying to catch us,” said Novak.

The Catamounts’ renewed vigor resulted in a scrappy closing act, but the officials kept the whistles in their pockets for the late part in the quarterfinal matchup.

Morrier was met head on with the aggressive Catamounts style of play. Often double or triple teamed, she was brought down in the 82nd minute with an injury to her left leg.

Morrier, who lead the team with 10 goals and 26 points in the regular season scorer, was aided off the field in a lengthy injury timeout. The veteran midfielder did return to play still finding herself at the center of many offensive efforts.

“It’s not all Rachel. It definitely helps, she creates a lot of space and draws a lot of attention. It created space for other players. She was a warrior, and the players just wanted to do it tonight – not just for Rachel but for all the seniors,” said Novak.

The River Hawks were quick to rally around their veteran players, introducing an even more aggressive offensive style in the closing 28 minutes of play.

Coach Novak did indicate that despite their inability to find the back of the net and end things in regulation, he was incredibly proud of the team’s responsiveness, grit and overall performance on the night.

Novak felt the young River Hawks team learned a lot from a hard-won victory in their first ever Division 1 playoff match, and they will look to build on their success as they move forward in the America East Tournament.

The River Hawks will take on the Stony Brook Sea Wolves in the semifinals Sunday at Lavelle Stadium in New York.