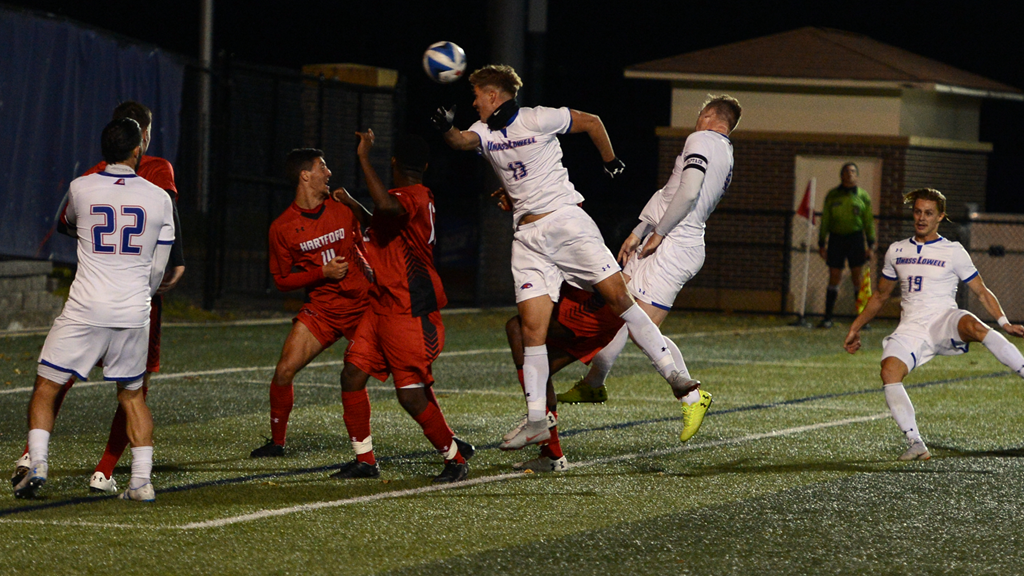 The UMass Lowell men’s soccer team (9-5-2, 4-3-0) finished their regular season with a 1-0 victory against America East conference opponents Hartford (1-10-5, 1-5-1) on Halloween night. On Senior Night, senior goalkeeping duo Chris Hochman and Zach Rowell were able to combine for the shutout. Other seniors included in the starting lineup, who were honored Wednesday night, were midfielders Jakov Basic and Jannick Baumer, defender Franky Martinez and forward Ivan Abramovic.

“I thought it was a good performance by the guys. I think Hartford did a good job staying compact and making it difficult for us to score. We did well to stay patient, started to create chances for ourselves and eventually got a call in our favor. It was earned”, said head coach Christian Figueroa.

The River Hawks began as usual, attempting to set the tempo and dominating possession with midfielders Roko Prsa and Basic. Beginning with that duo, the River Hawks attempted to find their first goal of the night working through the left flank of the pitch. With seven minutes to go in the first half, forward Mayele Malango had his shot go wide. Minutes later, defender Chase Reichenberg saw his heading effort go wide to finish off a 0-0 half.

On the other end, UMass Lowell were dominant and did not allow a single shot on target by Hartford all game outshooting the visitors 13 to 2 in total shots.

Fifteen minutes into the second half, with UMass Lowell searching for the break through, forward Renato Kauzlaric found a streaking Ivan Blaskic inside the six-yard box, but Blaskic was unable to convert with his shot going high over the net.

Prsa and Abramovic had the same outcome minutes later with their shots both missing the target as the River Hawks continued to work the left side of the Hartford defense.

The constant pressure by the River Hawks was rewarded with midfielder Abdi Shariff-Hassan earning a penalty after being taken down by a Hartford defender in the box. Forward Ivan Abramovic stepped up and calmly slotted the ball away from a diving Hartford keeper into the bottom right of the net with 12 minutes to go in the game. The penalty kick goal marked his third goal of the season. That’s all the River Hawks needed as they were able to close out the game with more offensive soccer controlling the final minutes of play.

In his first career start, Hochman was not tested by the Hartford attack and did not register a save. Rowell came on for relief for Hochman and earned his eight win of the season.

“It’s a new season now and a quick turnaround for us. We’ll recover from this and get ourselves ready for this Saturday,” said Coach Figueroa.

UMass Lowell will begin postseason play this Saturday at 4 p.m. at Cushing Field as the 3 seed in the America East Conference playoffs where they will be hosting 6 seed Albany. The River Hawks previously defeated Albany 2-0 on Oct. 20.