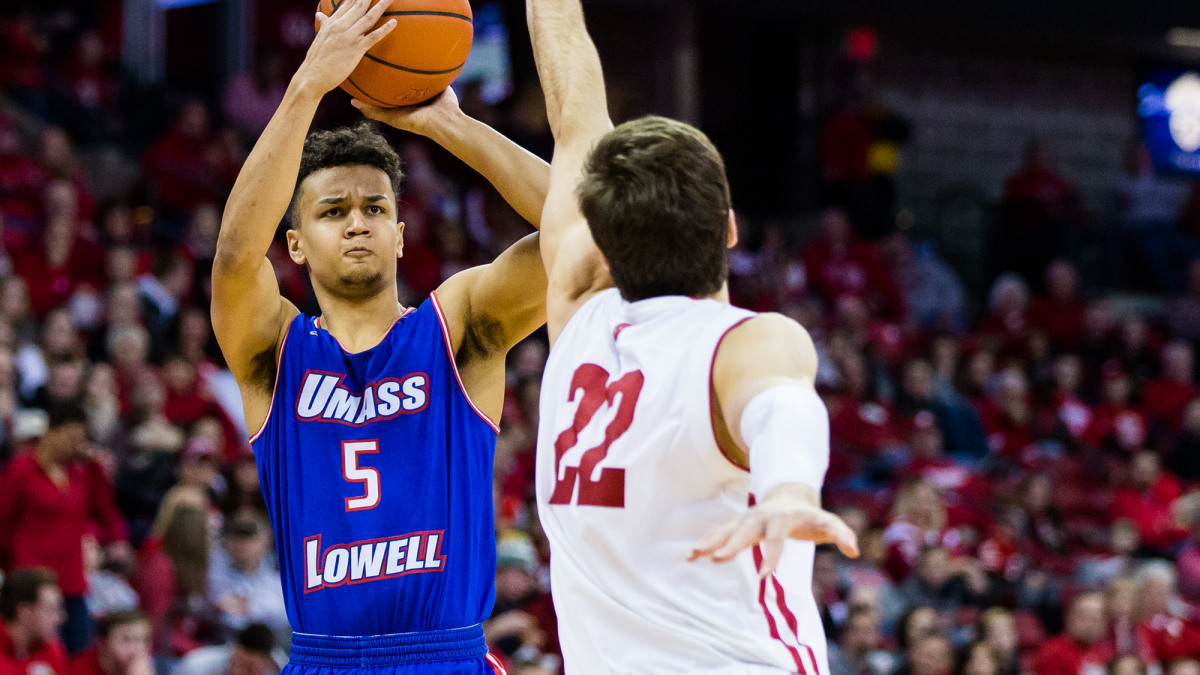 With senior captains Ryan Jones and Josh Gantz leading the way, the UMass Lowell men’s basketball team will be starting a new chapter this season in their sixth year in division I history. The River Hawks will be starting fresh this year having two 1,000-point players in Jahad Thomas and Matt Harris both graduate this past season.

“It’s such a great and different group this year. We are so young so I’m hesitant to put a number for wins, but we’ve outperformed people’s expectations every year,” head coach Pat Duqette said. “We finish 5th or 6th in the league every time, yet we’ve been picked last almost every year.”

Duquette is entering his 6th year as the program’s head coach, as he’s overseen the entirety of the transition from Division II to Division I.

This past year the River Hawks had their first taste of postseason play, tied a program record of 12 wins, and qualified for the conference tournament. The River Hawks led early, but eventually fell late to – NCAA tournament cinderella dancers for those who remember – UMBC in the America East conference playoffs. Now with their senior year ahead of them, the captains look back.

“Your focus just changes as you get older. As a freshman you might be fighting for your spot and proving you belong, but now we want to win,” Gantz said. “..For me it’s rebounding. I want to improve on both the defensive and offensive glass. Plus, I want to improve my field goal percentage.”

Jones also wants to make the most out of his senior year.

“When you come in you try to learn from the guys who are already here. I think I’ve been put into a good position to succeed,” Jones said. “Taking away a little from each one of them and improving my game. Consistency is where I want to improve…I’ve had a lot of ups and downs my first few years.”

These captains always bring it back to the team.

“For us and the team, the ultimate goal is to win the America East. Both the regular season and the tournament,” Gantz said.

The River Hawks want to improve on their 12-18 record from last year that had them finishing sixth in the conference. This year the team consists of a very young core. With only three seniors and two juniors, the teams fills up with mostly underclassmen including seven freshmen. Both the coach and captains agree on the biggest area of improvement for the upcoming 2018-2019 regular season: defense.

“Defense has always being an area we have emphasized,” Duquette said. “We’ve been very good these past few years on offense, but our defense is definitely an area want see growth in.”

Duquette will try to help the River Hawks improve on their defense, while maintaining an already efficient River Hawk offense. As a team that consistently finishes in the top tier of offense statistics in the conference, they’ll look to once again reach postseason play with excellent ball movement and unselfish scoring.

“We play our best when we move the ball and play more freely,” Gantz said. “When we don’t care who shoots, as long as we’re getting good looks that’s when we play our type of basketball.”

The UMass Lowell men’s basketball team will begin their regular season against the UMass Amherst Minutemen at Mullins Center Tuesday, Nov. 6 viewable on NESN. The River Hawks will have their season opener on Nov. 10 against Wagner at the Costello Athletic Center. Tip-off is scheduled for 1:05 p.m.