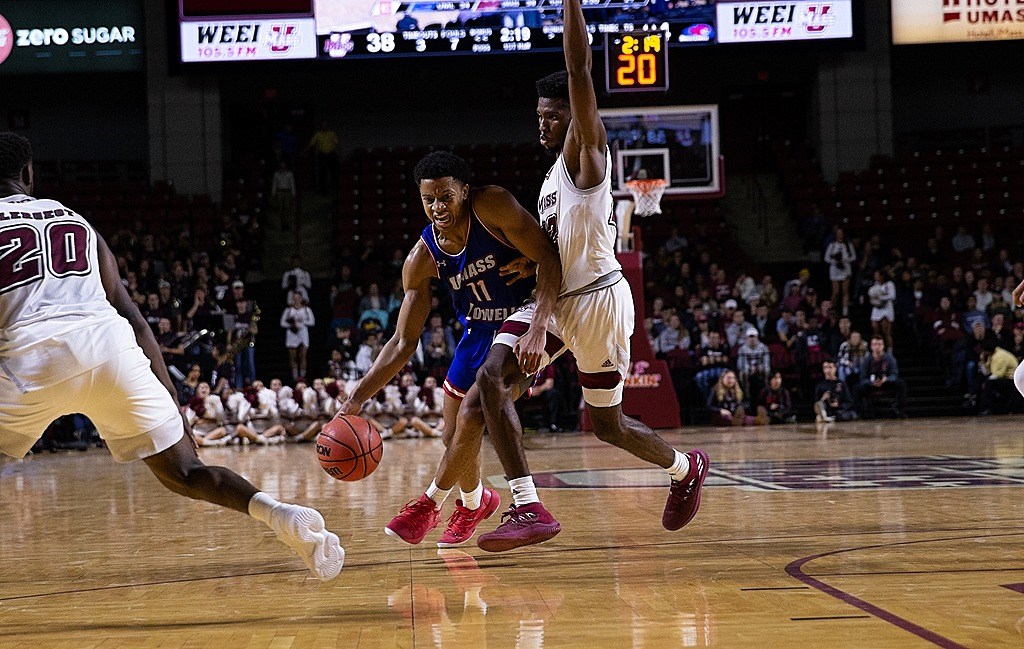 The UMass Lowell men’s basketball team (1-1) earned their first win of the season on Saturday afternoon against the visiting Wagner Seahawks (0-2) with a final score of 88-84 in overtime. The River Hawks had four players in double figures and outscored the opposing bench 27-14.

“I thought it was a great college basketball game,” said head coach Pat Duquette. “A really fun, intense environment so I’m happy for my guys because it’s always fun for a player to play in that type of environment. But not so much for the coach to be honest with you.”

The home opener for the River Hawks saw the teams exchange leads 14 times while both teams found themselves leading for an even twenty minutes each.  The River Hawks started strong with a 13-4 lead seven minutes into the first half while causing multiple shot clock violations on the defensive half. The visitors would not stay quiet as they took the lead with six minutes to go in the half.

Both teams traded leads, but Wagner lead at the break 36-34.

“Alex gave us a boost in the first half,” said Coach Duquette. “He got a little too excited and took some very tough shots but he settled won, and that’s all we can ask for. He was even more comfortable in the second half.”

“It felt great [playing in home town],” said Rivera. “A lot of my family and friends came out, so I just wanted to get a W.”

Both teams came out shooting well and even trading multiple threes early on in the second half. The River Hawks were able to take the lead back with over 13 minutes to go but continued to trade blows with the visitors. Costly turnovers and missed open shots would allow the visitors to go on a 9-0 run midway through the second, but the River Hawks would battle back.

Wagner would have their own momentum swinger with one of their forwards crashing the boards and dunking on the River Hawks defenders, completely quieting the home faithful at Costello. Sophomore guard Obadiah Noel would bring that home crowd energy right back.

“I’ve been waiting for this game since last year. It was so exciting to play in front of our fans again. My family also came out all the way from Maryland so we couldn’t disappoint,” said Noel

Noel, assisted by senior captain Ryan Jones, followed up the Wagner dunk with his own. Except this one being finished off with an athletic reverse alley-oop that sent the crowd in chaos and put the River Hawks down by just one.

“It’s the first time I’ve ever done something like that,” said Noel.

The River Hawks would follow up the Sportscenter worthy dunk with a pivotal stop that saw Jones come up with the defensive rebound. On the next possession, leading scorer Christian Lutete would get fouled. He tied up the game on the free throw line. 73-73. A strong River Hawk defensive stop at the end of regulation led to overtime.

The River Hawks would win the tip off in overtime and never looked back. Three pointers from Rivera and Lutete saw the hosts take an early lead. The River Hawks finished out the overtime period with big defensive stops. A final rebound from Lutute saw the River Hawks leave Costello with an 88-84 win.

“It’s good to get our first win here at home in front of a really good crowd,” said Coach Duquette.

The men’s basketball team will continue their season when they visit Central Connecticut State on Tuesday Nov. 13 at 7 p.m.