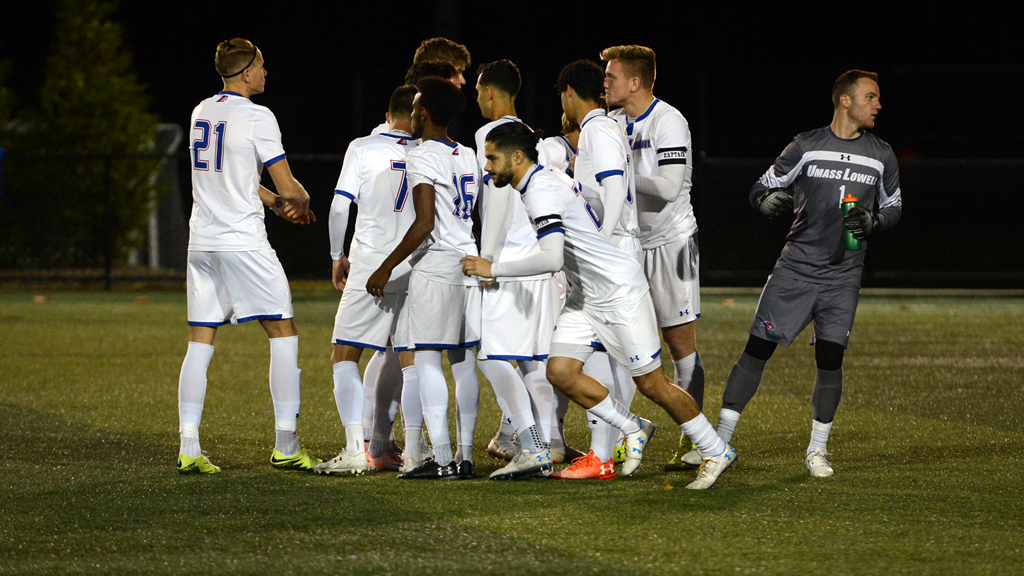 “Yeah, I thought it was a tough day for the conditions,” said head coach Christian Figueroa. “Obviously, both teams played in it. I think our guys did a great job dealing with it.”

The River Hawks had freshman goalkeeper Patrik Gujic in net but not much would be needed as the home side was dominant throughout and did not allow a shot on target all game out shooting the Great Danes 14-3.  On a cool, fall day with relentless wind the River Hawks looked for a break through.

“We did a great job to be patient,” said Coach Figueroa. “We created some opportunities. We really limited them. They have some quality players, and their coaches do a great job with the game plan. We did well to take control of the game early on.”

The River Hawks seemed destined to score early accumulating seven shots in the first half. One of them coming early from senior midfielder Jakov Basic, but he saw his effort go wide left. A few minutes later junior midfielders Roko Prsa and Dario Jovanovski would try their luck but both shots got blocked by a solid Albany defense.

With a few minutes to go till halftime, midfielder Basic took a free kick that eventually found Prsa inside the penalty box. Unfortunately for the River Hawks, Albany defenders swarmed Prsa and blocked the attempt. The game entered halftime scoreless.

Albany had a different attitude to begin the second half as they pushed forward to create some type of offense. They found themselves in a quick breakaway, but the River Hawks responded with sophomore midfielder Abdi Sharrif-Hassan and senior Ivan Blaskic combining to clear the ball from danger.

As play continued, junior forward Alejandro Osorio dribbled past two defenders to get his shot attempt off but saw his effort go barely wide in the early stages of the second half.

Midfielder Shariff-Hassan tried to take matters into his own hands by recovering possession in his own half and pushing all the way forward until he was brought down outside the Albany box. A free kick from midfielder Basic proceeded where he forced Albany’s goalkeeper into a save. Sophomore Owen Miller was trying to do his part by producing good services into the box from the left flank.

With less than five minutes to go in regulation, Shariff-Hassan won a corner kick after his cross deflected off an Albany defender. Midfielder Basic delivered a ball with good service that found midfielder Owen Miller. Miller was able to get just enough on it to put in in the back of the net and send the home faithful at Cushing Field into hysteria.

As the River Hawks attempted to close off the game, Albany won a free kick in their own half. Great service saw an Albany forward almost have a breakaway but defender Blaskic crucially cleared the ball out of danger.

The UMass Lowell men’s soccer team will continue their postseason run as they pay a visit to the number 2, New Hampshire, on Wednesday Nov. 7 at Wildcat Stadium in Durham.

“I think we’ll take a look at the film [and] see what has changed over these last couple of weeks and really go from there,” said Coach Figueroa.