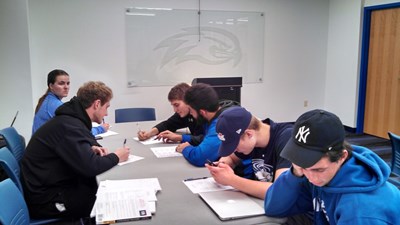 We are used to the idea about student-athletes at UMass Lowell: their athletic performances and how they represent our school when they wear the River Hawks jersey. What is not really on the news as often is the everyday struggle of these athletes who are students just like everyone else. A student-athlete’s life includes a very packed schedule that must be well organized for both the student and the athlete to be successful.

Christina Rizzi, a junior transfer for the softball team, acknowledges that she would like to study in the mornings before her classes, but she usually has a lifting or conditioning practice at 6 a.m. Then there is a longer practice on the softball field that keeps them busy for the rest of the morning.

After that, it’s time for class, and on the busiest day, she has a lab class and a night class. The time remaining is for studying and homework.

Rizzi would like to get enough hours of sleep, but when she needs to study at night and then go to practice that early in the morning, she says “It feels like I never actually went to sleep.”

Lara Ansaldi is a freshman from Argentina for the field hockey team, and she also has to deal with missing classes because of the season.

Her team doesn’t practice too early in the morning, but she still doesn’t get a lot of sleep. She would like to do her school work in the afternoons, but she doesn’t get back to her room before 6 p.m. because of practice. The time left to do homework is at night.

When she has a lot of work to do, Ansaldi goes to sleep very late, but sometimes she prefers to wake up very early in the morning to get it done. Not sleeping many hours makes her feel very tired during the day and at practice. In fact, she says it is very hard for her to do well at practice when she sleeps four hours a night or less.

To go through all these difficulties, student-athletes are helped by the school’s Athletic Department. Their grades and success in class are among the priorities of all the coaching staff.

Softball head coach Danielle Henderson points out that the importance of good grades from her athletes also reflects on their commitment to the sport. She believes that if the athletes don’t put effort in their classes or manage their time wisely, their laziness will show on the field.

The Athletic Department coordinates and helps the students. Lauren Trapasso is an Academic Athletic Coordinator and she works with four teams on campus. She has an important role in the athlete’s college life.

Regularly, she checks on their academic situation and helps them get the best results they can. The athletic advisor, for example, makes sure that the students who are required to do a certain number of hours of study hall get that done throughout every week. Both students and the department itself think that study hall is very useful and important.

Rizzi says, “Study hall limits distractions, and it helps priorities what you need to get done first; sometimes, I would just take a nap if I was in my room, but at study hall I have no choice.”

Trapasso strongly believes in the effectiveness of study hall for anybody adjusting to UMass Lowell.

She says, “It sets the expectations that the athletic department has, and it helps the student-athletes get some routine.”

She knows all students struggle somehow at the beginning, so she likes to be there for the athletes and teach them how to maximize the time they have. She considers her help to be very important at the beginning of the athlete’s new college life because she knows that once they understand and learn how to manage their time, everything can only get easier.

Being a student-athlete is not just fun and travel, it is a lot of struggle and hard work, but that is what makes it a totally satisfying path. Such a challenge helps these young athletes grow in the everyday life and through all the difficulties.