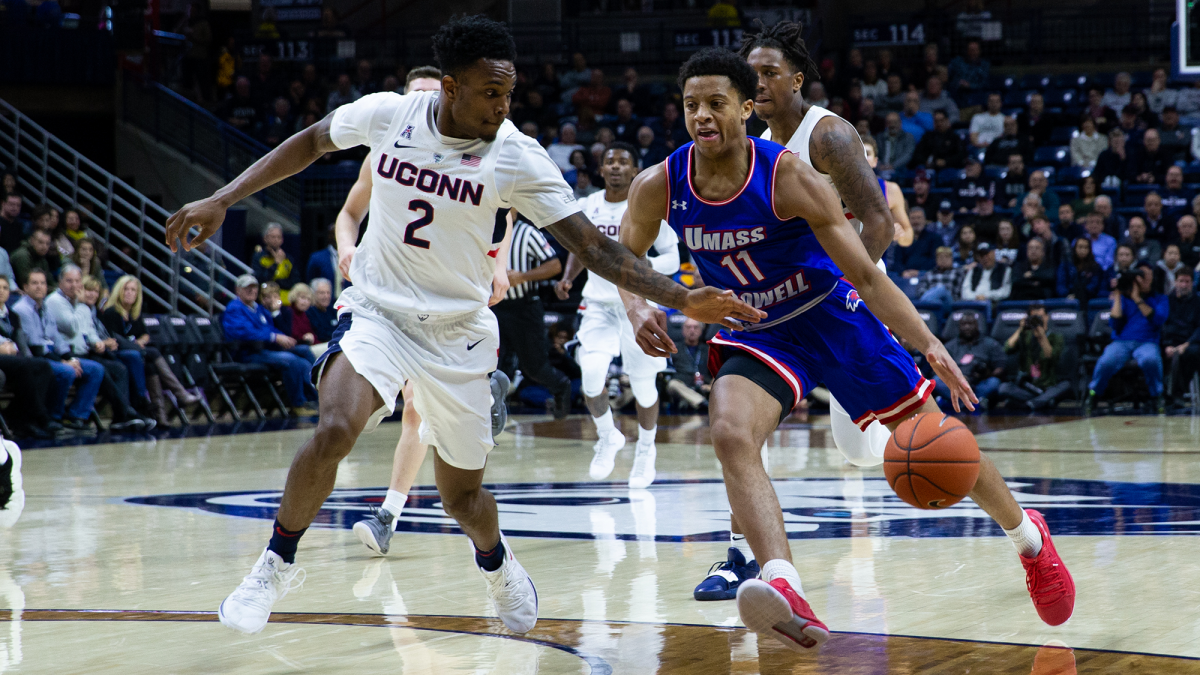 The UMass Lowell men’s basketball team (5-6) is still looking for their first road win of the season after a disappointing 79-60 loss to the Boston Terries (6-4) at Case Gym on Tuesday night. Led by redshirt junior Christian Lutete with 20 points, the River Hawks were never able to find their groove in this Division 1 matchup.

“We got beat by a better team tonight,” said head coach Pat Duquette. “[They are] a real physical team, tough, they defended us better than anybody we have played all year.”

Lutete and sophomore forward Obadiah Noel were the only UMass Lowell players to score in double figures against Boston University. Noel finished the game with 12 points, five rebounds and three steals.

The River Hawks came flying out to a 10-2 start with good defense and forced the Terriers into turnovers. The Lowell fans who made the trip to Boston had hope that the young team could get their first road win of the season.

The Terriers went on their own run shooting the ball well as they went on an 18-8 run to take the lead with less than seven minutes to go in the first half.

Both teams played rugged defense as their offenses both shot less than 50 percent from the field in the first half. The River Hawks led the nation in assists coming into the game but would only produce eleven for the entire game. The lack of team play on the offensive side of the ball contributed to their poor shooting night. They shot 1-9 from three-point range in the first half and did not make a shot from deep until there were only 40 seconds left in the half.

“We got rushed by their defense. We weren’t able to generate open shots, but again, I thought BU played really well. They defended us better than anybody [else has] all year,” said Coach Duquette.

Despite their shooting woes, UMass Lowell only trailed Boston University 34-32 at the half. Coach Duquette said the team’s first half defense was the best they had played all year thus far.

The River Hawks were coming off their best shooting performance against New Jersey Institute of Technology, but their offensive struggles would continue in the second half as well.

The visitors finished 2-16 from three-point range. Another disappointing statistic for the team was the bench play. Freshman guard Alex Rivera has been the team’s leading scorer off the bench averaging 13.5 points a game, but the River Hawks were outscored 28-18 by the Terrier bench.

Junior forward Max Mahoney led the Terriers to victory with 23 points and 10 rebounds. An underwhelming second half led to the River Hawks still searching for their first road win of the season.

Coach Duquette praised the team’s mentality throughout the game. “We stayed together. We didn’t get down on each other, so we gotta bounce back,” he said.

UMass Lowell returns to action Friday night at 7 p.m. at Tsongas Center where they will host Maine Fort Kent.