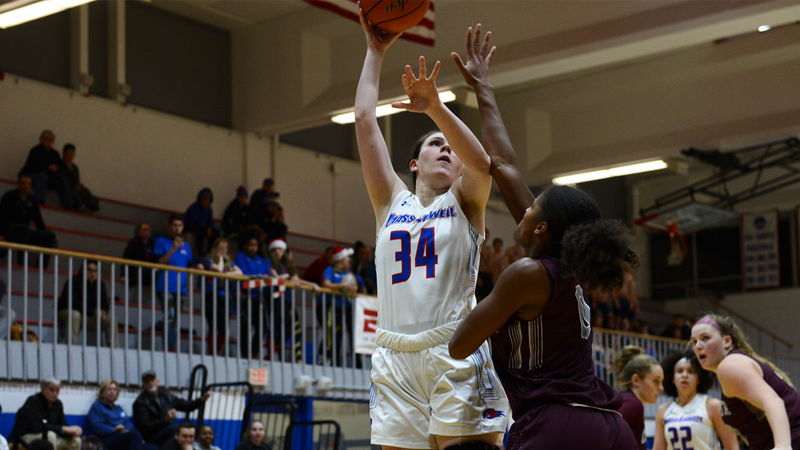 The UMass Lowell women’s basketball team (3-7) lost  their second straight game 71-47 against the Providence Friars (5-3) on Saturday afternoon at the Costello Athletic Center.

Senior guard Brianna Rudolph lead the River Hawks in scoring with 14 points, and she also recorded three rebounds and two assists to add to her point total. Junior forward Brianna Stiers had a near double double as she scored eight points and grabbed six rebounds.

The game started off with sophomore guard Linda Svenne hitting a turnaround jumper off an assist from senior forward Katherine Smith. The next few minutes of the first quarter was a defensive battle between both teams.

Providence used their three-point shooting to help boost their lead shooting 4-9 in the first half. However, the River Hawks found answers to keep the Friars’ lead to single digits. Senior forward Oda Shackelford tied the game up at 8-8, and Rudolph paced the UMass Lowell offense hitting a step-back jump shot near the end of the first quarter. The River Hawks and the Frairs traded baskets back and forth in the second quarter. UMass Lowell was able to reduce the deficit to 31-26 after the first half.

Head coach Tom Garrick said that he liked the energy and intensity that the team played with in the first half. He said that the team was executing offensively and sticking to the game plan. However, Providence took a double digit lead in the third quarter outscoring the River Hawks 23-10 in the quarter.

“Our focus and our energy fell apart in the second half. I thought we fought really hard in the first two quarters. I thought we were on to something there. I thought we had it to where we needed it to be,” said Coach Garrick. “[What] we always talk about as coaches is that the first five minutes of every quarter is the most important because it sets the tone.

Reflecting on the Big East opponents that UMass Lowell has played this season: Butler, Seton Hall and Providence, Coach Garrick said, “hopefully we get a little tougher, and we see another level of play that we hadn’t seen in practice and some of our other games, and it gives us something to strive for.”

The River Hawks will go on a three-game road trip to finish their non-conference schedule before returning home at the Tsongas Center to face Vermont to open up their America East schedule.

On what Garrick and the coaching staff are hoping to achieve on the road trip, Garrick said, ““[We will] try to get extended minutes out of our kids more consistently, so if you’re playing 28 minutes, 15 minutes of those efficiently positive, we’re trying to get those to be 18 and 19 and 20 positive ratings efficiency wise. We’re just trying to get better step-by-step, block-by-block, brick-by-brick.”