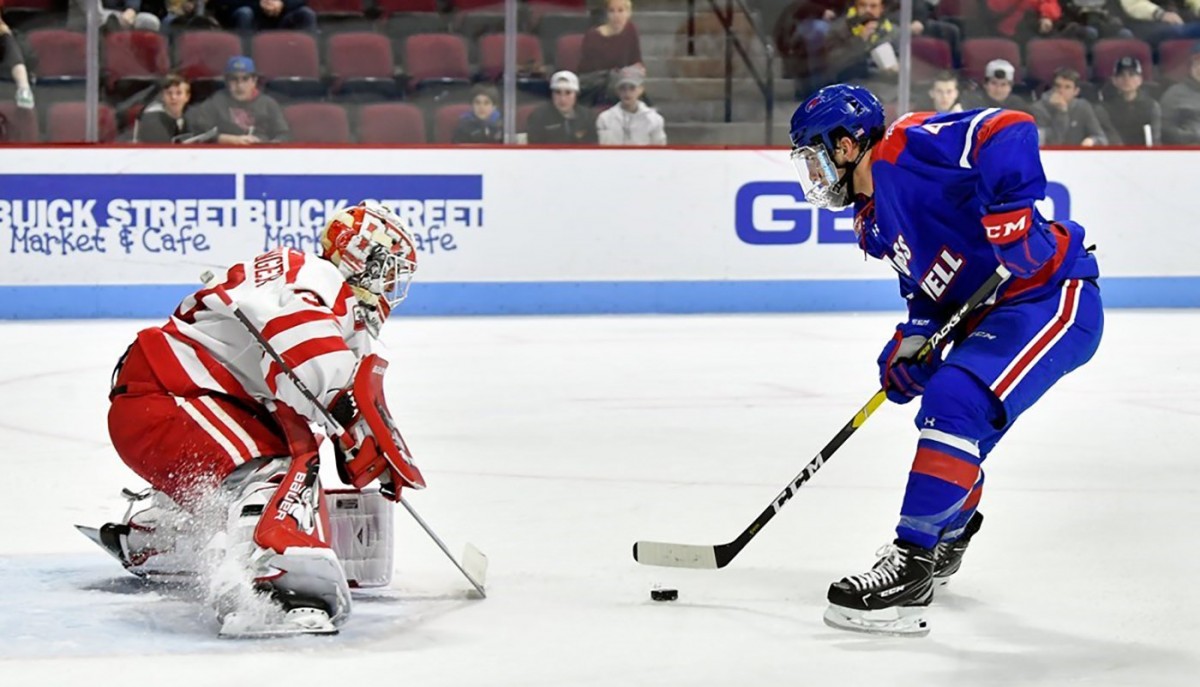 In uncharacteristic fashion, River Hawk fans vacated the Tsongas Center before the final whistle on Friday as the UMass Lowell men’s ice hockey team fell 3-0 to the Boston University Terriers in Game 1 of their Hockey East Tournament quarterfinal series.

The four seed River Hawks may have been the benefactors of home-ice advantage going into the tournament, having closed out their season with a solid 18-11-5 record and 12 wins in conference play, but the team stagnated in the closing weeks of the season. In fact, UMass Lowell saw victory in just one of seven games in the closing stretch.

“A lot of times tonight they were moving, and we weren’t. And when you’re standing still, it is very tough to catch up. We’ll have to find ways to improve for tomorrow because I didn’t think we gave ourselves enough opportunities,” said Norm Bazin, River Hawk head coach.

For Boston University, the opposite was true.

The Terriers saw struggles throughout the season and battled, if in vain, to reach .500 by the end of the year. Despite closing out the 2018-19 regular season with a lackluster 14-16-4 record, Boston University battled back in the closing weeks – losing just two of their final seven tilts.

“I know we wanted to be hard. If they wanted to make it to our end of the ice they had to go through us,” said Albie O’Connell, Boston University head coach.

The Terriers stuck to that game plan from start to finish, forcing UMass Lowell to take chances passing through traffic and take low percentage shots starting in the first period of play.

UMass Lowell was outshot in the first period and unable to generate any substantial offensive presence and, as a result, played most of the period in their end or the neutral zone.

“We were hoping to come in and set the tone in the first ten minutes – that’s not what happened. I wasn’t pleased with the first period, but we came out even… I didn’t think we deserved to be even after the first,” said Bazin.

Unfortunately, UMass Lowell would not be so lucky in the second period of regulation.

Despite outshooting the Terriers at a 14-9 margin and sustaining a nearly 10 straight minutes of offensive pressure at one point, UMass Lowell crumbled as their opponent found the scoreboard not once but twice.

Boston University’s defensemen were apparently determined to lead the offensive charge Friday night, and the second goal came on an odd-man rush in which sophomore defenseman Cam Crotty was fed beautifully by David Farrance to beat Hernberg on the glove side.

Bazin made clear in the postgame, however, that he was not unhappy with Hernberg’s play Friday. Citing to numerous breakaway opportunities and defensive lapses, River Hawk coaching staff was content with Hernberg’s 24 save evening. Still, Bazin was unwilling to rule out starting junior goaltender Tyler Wall on Saturday.

“He didn’t get enough help… But we’ve got two great goalies that we believe, and I’ll have to watch the film to see who plays tomorrow,” said Bazin.

Unable to register more than one shot in the first 15 minutes of the closing period, Hernberg would be pulled in favor of an extra man late in the game.

The extra attacker would not, however, do UMass Lowell any good. Not only would the team only manage to register three more shots in regulation, but junior forward Patrick Curry would score on the empty net in the closing minutes to seal the deal for Boston University.

“Not enough mojo – there’s no question,” said Bazin, “One team’s going to be done Monday. We only have two possible opportunities to rectify this situation. So, hopefully we’ll take the opportunity tomorrow and come at it that way.”

UMass Lowell will fight to keep their playoff hopes alive as they take on Boston University in Game 2 of the Hockey East quarterfinal round tomorrow night at the Tsongas Center. Puck drop is 7 p.m.