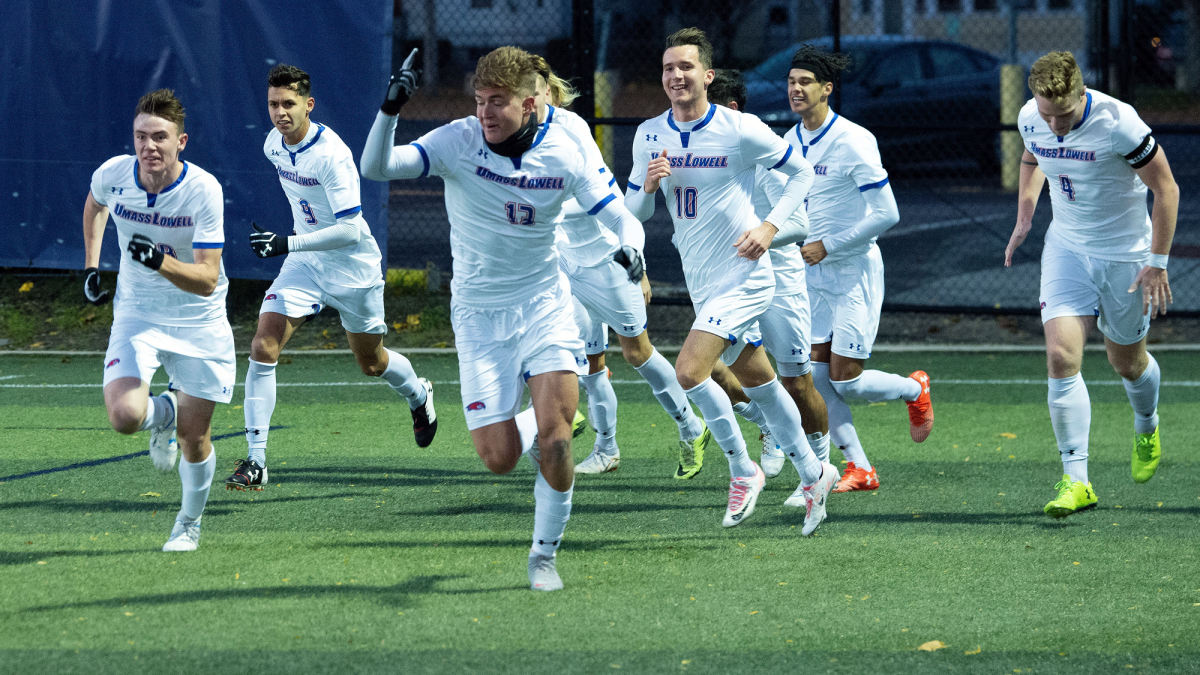 The UMass Lowell River Hawks (2-2-1), took flight this past Saturday night with a 2-1 win against the traveling Boston University Terriers (0-5-0), who are finding no luck this season without a single victory. Midfielder Roko Prsa kept the Terriers searching with a golden goal, via header off a set piece, ending double overtime at Cushing Field.

Manager Figeuroa, on the defensive effort of the squad, said, “I thought it was difficult at times, obviously the weather conditions make it difficult for defenders having to deal with strikers running on your back shoulders, any balls that got into the channels of service.”

The defeat at home to Northeastern is nothing but a distant memory as the River Hawks started strong and addressed their difficulties moving forward. Lowell’s attack looked lively and dangerous as they pinned down the Terrier’s defense with their own defensive line looking assured and calm on the ball. It was a tough challenge in the first half as Boston University gave several challenges that caused the referee to blow his whistle. Despite this, chances were flying in for the River Hawks as they managed to put all of their four shots on target in the first half, giving Terriers keeper Michael Stone a lot to think about.

The River Hawks took the lead late in the first half via Jovanovski’s emphatic strike at the edge of the 18, played in by forward Stanley Alves on the counter. It could have been a different game in the first half for Lowell, as they had several of their chances saved by the terriers-who were not looking defensively sound at the half.

The second half began with some nerves from the home side as Boston University shifted momentum and started to challenge Lowell’s keeper while pushing back their defense. UMass responded to BU’s sudden surge of energy with their own as they brought their attacking prowess to the fold to ultimately no avail, as they failed to put their chances away.

Late in the second half, the Terriers were awarded a penalty following a dangerous challenge in the box after a corner. Visiting midfielder Matt McDonnell tucked away his chance and gave his team a lifeline back into the game.

Soon after, Boston University gave pressure to a solid Lowell defense who gave little way in behind and fulltime whistle would hit. The score remained at one all and the River Hawks were headed for their second over time in three games.

The matched resumed with a roaring reception from the Lowell stands. It was a back and forth game under the lights tonight with heavy rain pouring into free soccer. Chances to put the game to bed were wasted by both sides as the game entered its late stages. The River Hawks took control of the second period of overtime, with Boston’s fullbacks under pressure once again.

The home side would come out on top in the final minutes of overtime with Jovanovski’s free kick finding midfield catalyst Roko Prsa free in the box with a good four yards from him and the next man.

The UMass Lowell men’s soccer team will continue their journey on the road to Merrimack College, Sept. 17 at 4 p.m.