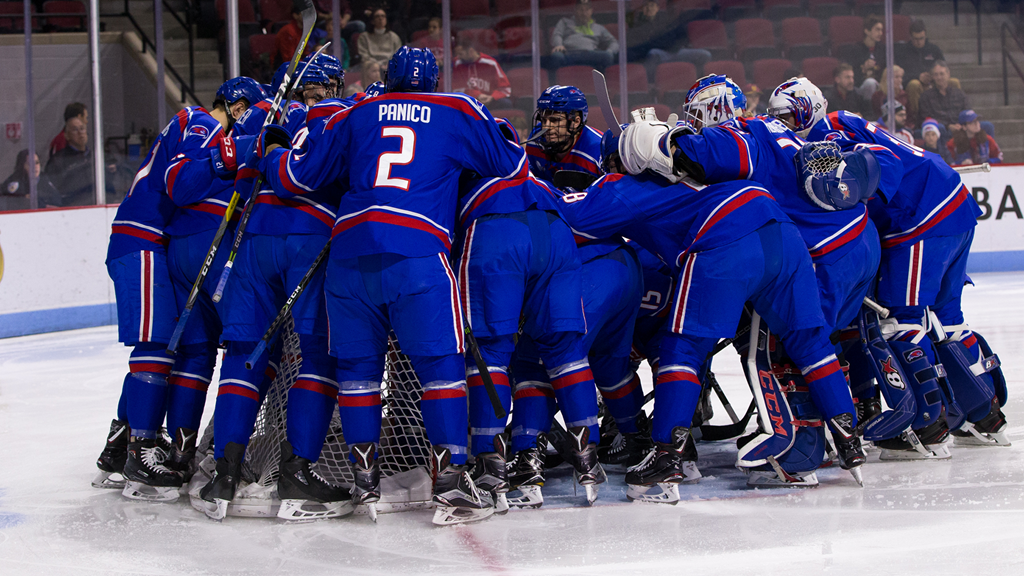 Carl Berglund scored with 39.7 seconds left in overtime and the UMass Lowell River Hawks righted the ship with a 3–2 overtime win against the No. 7 Providence College Friars Saturday night at the Schneider Arena.

Berglund took the puck off a turnover by the Friars and rifled the game winner at the top shelf of the net for his third goal of the season and his first career game winning goal.

After playing the Boston University Terriers to a 3–3 draw on Friday night and winless in their previous four games, the UMass Lowell River Hawks sputtered through the first two periods before getting their offense going in the third period and overtime.

The River Hawks (4–2–2, 1–0–1 HEA) fell behind quickly, though, and the Friars (4–2–0, 2–1–0 HEA) cashed in on their power play opportunities and played well in front of graduate goaltender Michael Lackey.

“I thought we played exceptional for the first two periods,” said Friars head coach Nate Leaman. “Ultimately, we didn’t do enough to win… Committing eight penalties is never going to be a successful way to win games.”

Wall was exceptional in net for Lowell, as he tied a career high with 40 saves, good for a .952 save percentage.

“I though [Wall] was excellent,” River Hawks head coach Norm Bazin said. “He gave us a great chance to win, especially in that 10 minute span [in the second period]. He was key for us and we’ll need him to keep going.”

River Hawk freshman forward Matt Brown scored his third goal of the season and the lone power play goal for the River Hawks at 15:36 in the first, when center Charlie Levesque handled a cross-ice pass from forward Collin O’Neill, and then fed it to Brown who went top shelf against Lackey.

The River Hawks did take a brief lead in the second period after a turnover in the neutral zone for the Friars, and freshman forward Zach Kaiser took the puck and whistled a wrist shot by Lackey’s stick side to make it 2–1.

The Friars’ freshman winger Patrick Moynihan scored less than two minutes after Kaiser on a redirect in front of the net, and the Friars outshot the River Hawks 24-9 after two periods.

The goal came on a five on three the Friars had after River Hawks Austin O’Rourke and Nolan Sawchuk were called for slashing.

The River Hawks freshmen class has been inconsistent this season, but Bazin is satisfied with how the players are responding to adversity and developing as the season goes on.

“They played well,” Bazin said. “Somebody has to contribute and I’m happy for those guys. I wish our power play unit was better, but we’ll take the points. Every point is crucial, even early on in the season.”

Junior forward Conner Sodergren displayed great toughness for the River Hawks, as he absorbed a couple of brutal hits to the head early on in the tilt. Although he cleared concussion protocol both times, the hits were reviewed on the ice to determine if the forcible contact to the head was intentional. Both times it was determined to be minor penalties, of which the River Hawks could not cash in.