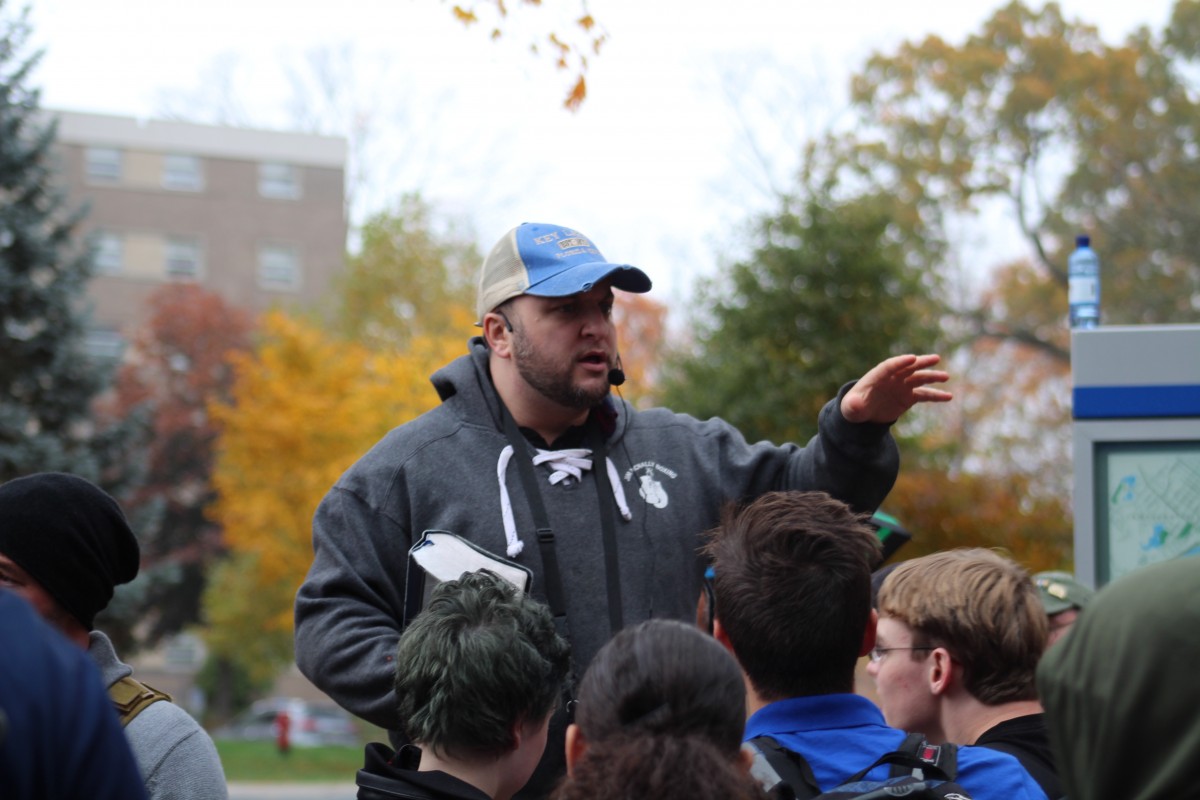 (Brigid Archibald/ UMass Lowell Connector) The group came to campus on Tuesday, October 29 to spread their message about sin.

A group of Evangelical Christians came to South Campus for an annual event they call Sin Awareness Day. The group, who arrived on Tuesday, brought with them signs that read “evolution is a lie” and “where are you going? Heaven or Hell.” The group said they had come to campus to make students aware of their sinful choices.

The group was on South Campus for a few hours preaching their messages, during which time they caught the attention of many students. Some students made signs with memes making fun of the groups, some got dressed in costumes, some argued with the group and some students had a dance battle in front of the group.

According to Sean Bishop, a Massachusetts native who says he works with the group through True Gospel church in Salem, Mass., says the group travels globally preaching to nursing home residents, prisoners, the homeless and anyone on the street.

Daniel says the group believes that denominations are man-made and that they do not push any one group.

“What leads us to Christ is a guiltiness over our sins. A lot of people are not aware of their sinful lifestyles, behavior and choices are the very ones that are leading them to their own condemnation, so we bring that to their awareness,” said Bishop.

“I don’t think what they’re doing is going to be productive in any way because of how they are coming at it,” said Erica Frazier, a sophomore majoring in exercise science. “The way that you get [your point] across is really important. The mode of delivery is what really going to resonate with people.”

Students’ responses to the group varied. Some students dressed up in costumes, some tried to argue with the men, many taunted the group, but a few members of the university tried to distract from the group. Leo Folan, a freshman majoring in music education, pulled out his guitar and started playing Oasis’ hit song “Wonderwall” when he saw the group.

“In my opinion, it just isn’t fair to push stuff to other people, and they look ridiculous. So, why don’t I look ridiculous and take some attention away from them? [That way] they are not the main show today, so people talk about this rather than whatever dumb thing they are talking about,” said Folan.

Among the students were representatives from UMass Lowell’s Healthy Hawks, a peer health education volunteer student group. Healthy Hawk representatives were on South Campus that day dressed in taco headbands for their “What’s so scary about STI testing” as part of their “Let’s Taco ‘bout Sex” series they host in collaboration with the Lowell Community Health Center. Tracy Moore, the director of Healthy Hawks, said the program advocates for safe sex and is in McGovern every Tuesday talking to students.

Morgan Frances, a graduate fellowship, working for Healthy Hawks, said that the visiting group’s message pertaining to the LGBTQ community was contradictory to the messages about inclusivity and healthy sex the group advocates for.

“The university supports free speech,” said Moore, “but that does not mean we support what was being said.” Healthy Hawk student employees and staff handed out pride stickers to students to use as a form of silent protest. They encouraged students to attend their event in McGovern if they felt uncomfortable with the group’s messages.

“UMass Lowell is proud of the way our students responded to an unaffiliated group and their message on South Campus today. By responding with messages of inclusion, respect and love, River Hawks demonstrated the strength of university values, the weakness of words of hate and our commitment to the First Amendment,” said James Kohl, UMass Lowell’s dean of student affairs and enrichment.