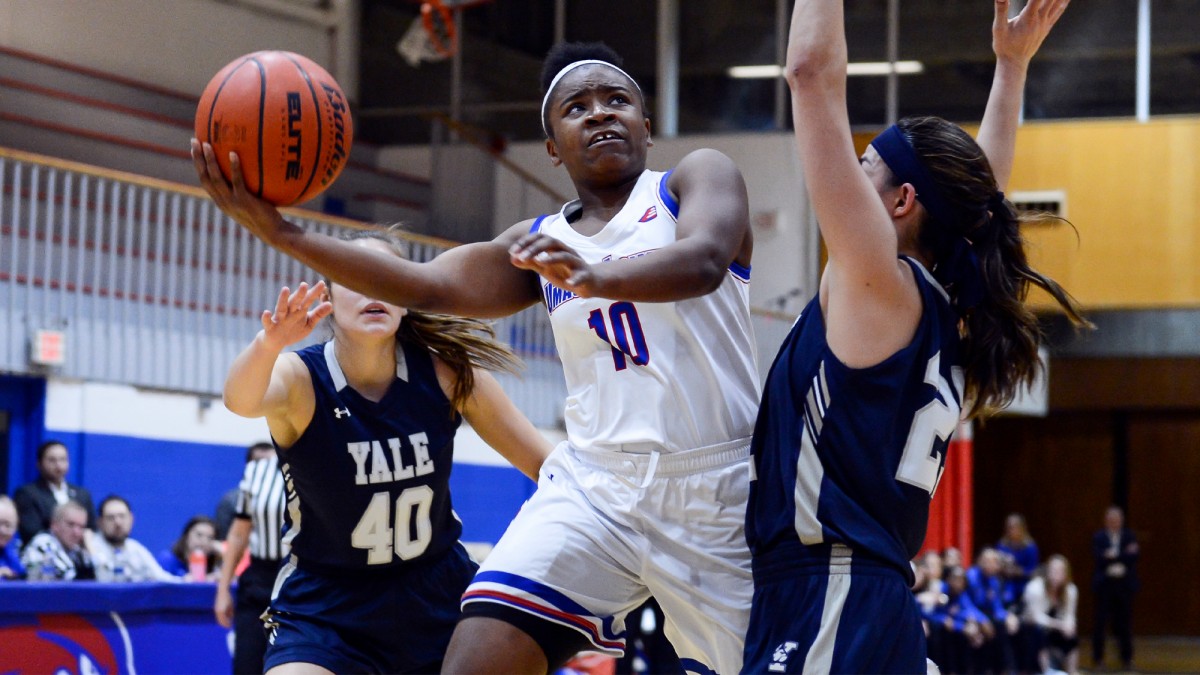 Even with a late rally, the UMass Lowell women’s basketball team (0-5) suffered an eight-point defeat to the Yale Bulldogs (2-1), 67-59, tonight at Costello Athletic Center. Yale forward Camilla Emsbo lead her team to victory with 18 points against the River Hawks. With a healthy contribution of 16 points from senior guard Ren’cia Rollings, UMass Lowell would not find that enough for victory against the smothering Bulldogs’ defense.

After suffering a tough loss on the road against Big 12 participator Kansas, 44-79 at the iconic Allen FieldHouse, the Umass Lowell River Hawks women’s basketball team looked to turn things around for their game against the Yale Bulldogs, but their performance was up and down.

Their struggles first started out on defense where they were unable to properly rotate, guard the wide-open shooter and properly guard the paint. And then the struggles on offense started when they were shooting a meager 26.7 percent from the field, but the River Hawks picked it up in the second period when they shot 47.1 percent. To reiterate the tough start, UMass Lowell would still find themselves down 11 at halftime even with that second quarter improvement.

Come the second half, everything began to change when the hosts began to slowly pick it up. On offense in the third period, they once again shot a meager 26.7 percent, but come the fourth period they picked it up and they shot an impressive 46.7 percent from the field.

Although the women’s team picked it up, they were still no match for the Bulldogs who were performing on all cylinders. They shot a strong 40.6 percent from the field , the Bulldogs were being very disruptive on defense. Overall, the Bulldogs finished with ten steals and seven blocks and were able to force 20 turnovers.

With a contribution not only from Rolling, 16 points, the River Hawks were starting to pick it up when they outscored Yale in the fourth period. Other notable contributors were freshman guard Jaliena Sanchez (12 points), freshman forward Denise Solis (10 points) and junior forward Chasidey Willis (10 points).

“I would call this an example of not inhering to the game plan at all, and getting too far behind and not being able to come back from behind,” their Head Coach Tom Garrick said when asked about their team’s performance. “It was a lack of communication in the first half.”

But all in all, Garrick leaves a positive note by leaving it up to chemistry and who really wants to play together. After watching the game, it seemed like communication and chemistry is what the doctor should’ve ordered. A bright spark showed from the team in the second half. A spark and display that leaves a lot of promise for the team.

“We have to find the right combination of kids who want to play together at the right time,” Garrick said.

FINAL | We battled back in the fourth to cut the deficit, but the Bulldogs come away with the win#UnitedInBlue | #AEHoops pic.twitter.com/78uGfywnK0

The UMass Lowell women’s basketball team has a chance to turn it around with upcoming games against Providence, Cornell and Bryant. Their next matchup will be Sunday Nov. 24 as they pay a visit to the Providence Friars. Tip-off in Rhode Island is set for 6 p.m. at Alumni Hall.