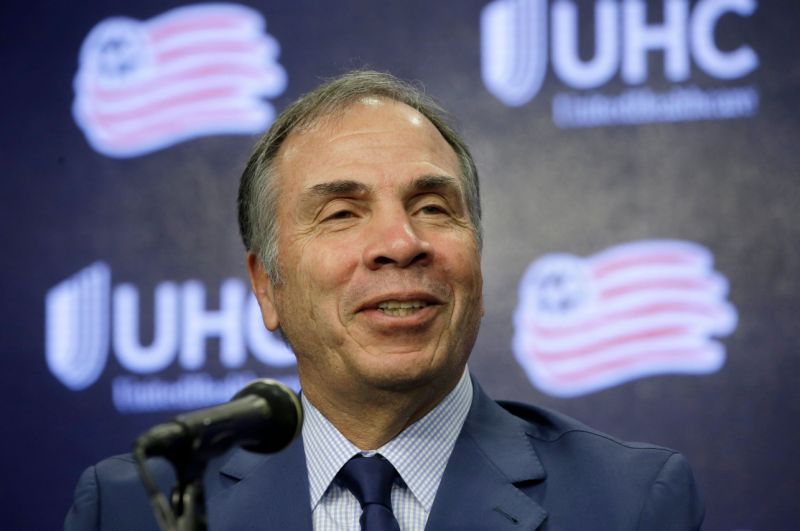 Arena took charge of the Revolution in May, and New England never looked back. (Photo courtesy of Yahoo Sports)

Not too long ago were the days filled with misery for the faithful fans of the New England Revolution. Today, we acknowledge the phenomenal turnaround of one of the original MLS clubs and question the distance between the Revs and the coveted MLS Cup.

Back in March, The Fort, the vibrant standing section for Revolution fans at Gillette Stadium, was filled with optimism as newly added F.C Cincinnati played a visit to Foxborough. Things turned south very quickly with a two-goal deficit in the final minutes of regulation. Having seen their club go 85 plus minutes without a shot on target, those same fans began to sing and chant about pretending to have seen their team score a goal.

With the mid-season firing of manager Brad Friedel and general manager Mike Burns, the Revolution were fortunate enough to have legendary MLS coach Bruce Arena take the reins as the manager and sporting director in mid-May.

Arena, led by newly acquired striker Gustavo “La Pantera” Bou, midfielder and team captain Carles Gil and recently USMNT callup goalkeeper Matt Turner, guided a team that had only accumulated ten points through twelve matches to the final playoff spot in the eastern conference. New England, on their way to the seventh seed, managed to gain victories away against Los Angeles Galaxy, away against New York Red Bulls, Houston Dynamo at home, top-seeded New York City FC at home and more on the road to their first playoff berth since 2015.

Nobody would have expected the Revolution to have a .500 record this season let alone a playoff matchup that pitted New England against the current MLS champions, Atlanta United at Mercedes-Benz Stadium. Unfortunately for the Midnight Riders, The Rebellion and La Barra (the Revolution’s official supporting groups), New England would fall 1–0 to a second half goal to Atlanta’s Franco Escobar with 20 minutes to play in regulation. Despite tallying more shots on target than Atlanta, the Revs could not find an equalizer.

“It was a hard fought 90 minutes,” Arena said postgame. “We could have been the team walking off 1–0.”

While goalkeeper Matt Turner accumulated five saves, Gil, who was named 2019 MLS Newcomer of the Year, created four opportunities for Arena’s squad. The defeat would see the Revolution’s 2019 campaign come to a disappointing end.

With the loss to Atlanta United in the first round of the Audi MLS playoffs, the Revolution are now forced to turn to the offseason and prepare for the 2020 season. Turner, following the loss, discussed how the Revolution took a step forward with their first playoff appearance in nearly half a decade. Now, New England will look to grow from the rollercoaster ride that was the 2019 season and win an actual playoff round and possibly a deep run to the cup.

With the most recent news coming from the Revs signing their seventh homegrown player in 16-year-old Damian Rivera, rumors have already begun on what offseason moves Arena and his team are looking to make. From possbile departing players to newcomers, the Revolution must make difficult decisions to make that wanted leap. Columbus Crew forward Gyasi Zardes, 28, whose worked under Arena in their LA Galaxy stint, is a name being tossed, but a rumor is just a rumor until proven otherwise.

The New England Revolution, under the watchful eye of iconic five-time MLS Cup champion Bruce Arena and some very talented players, have all the potential in the world to make that next step in 2020. With a league getting more competitive by the minute, the Revs will look to satisfy a market filled with champions.