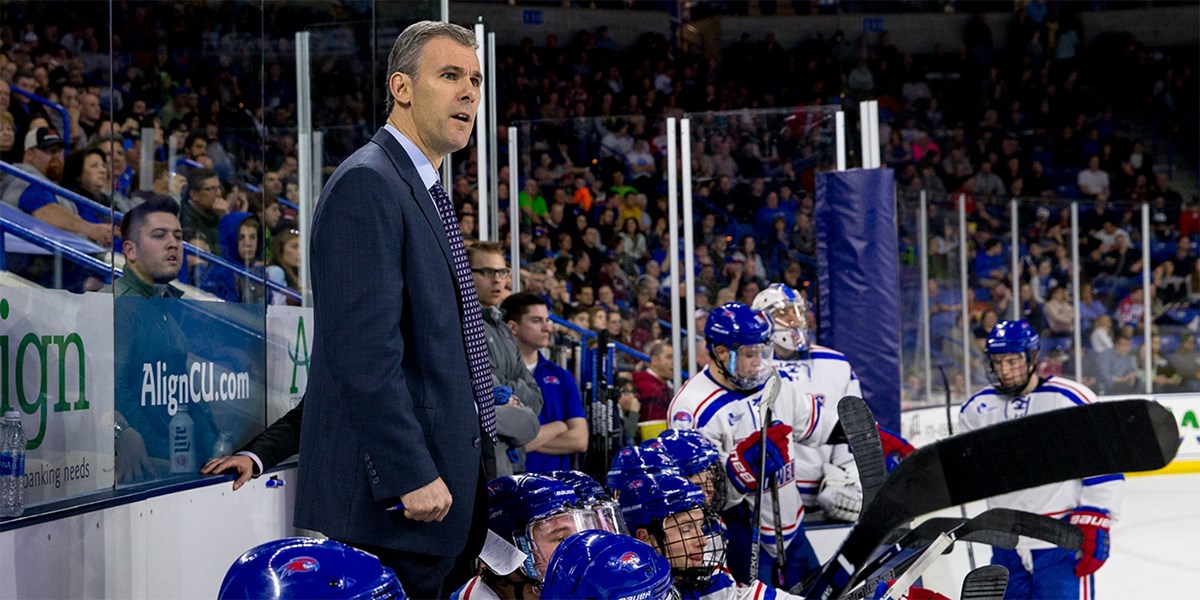 UMass Lowell Men’s Ice Hockey has a rich history. From its coaches to the players, to the rowdy fans in the seats. When the 2020-2021 seasons begins, current head coach, Norm Bazin will begin his tenth season behind the bench for the River Hawks.

Bazin could not pass up the chance to coach UMass Lowell. “Playing here, and then being an assistant was great, now being the head coach, it’s just unique,” said Bazin.

Bazin scored 68 points (32 goals, 36 assists) in 134 career games as a player. He won three team awards his senior season after posting 35 points (20 goals, 15 assists). However, Bazin was not done there, as he would help lift UMass Lowell over Michigan in the first round of the NCAA tournament later that year as well.

Now, as he coaches the new flock of River Hawks, he also finds time to enjoy his hobbies when he can. He likes going to restaurants and seeing the “hardworking and great people of Lowell.” Bazin is very proud of what he, his staff, and players have accomplished in his first nine years.

“There is obviously a lot to be proud of,” said Bazin. In 2011-2012, they won 19 more games than the previous season, which is an NCAA record for improvement. They went to the Frozen Four in 2012-13, the first appearance for UMass Lowell. Then in 2017, they swept Boston College to share the regular season title and beat BC and the Notre Dame Fighting Irish to win Hockey East. “I give all the credit to the boys; they play hard and good things happen,” said Bazin.

It has been said that UMass Lowell is somewhat of a goalie factory. Connor Hellebuyck of the Winnipeg Jets and most recently, Tyler Wall of the New York Rangers, are two NHL players who have gone through the program. “The staff, and more specifically the goalie coaches we have had here, have certainly helped them. I think they worked hard to get better every play,” said Bazin. He also said that the first step is finding the players.

Senior Forward, Connor Sodergren is another player who has improved under the coaching of Bazin. “One reason I came here was the success of the team and the coaching staff. They show us the things we can do to get better and really (focus) on the little things,” said Sodergren. Sodergren has scored more goals each season since joining the River Hawks. “I think that’s all part of his coaching us to get in front of the net and getting pucks on net,” said Sodergren.

This past season, Bazin surpassed 200 wins with the River Hawks. He also won the Spencer Penrose Division I National Coach of the Year in 2012-13. He said he tries not to get caught up in those kinds of things, though. “I don’t usually worry too much about things like that, it’s an honor to get to coach such great young talent,” said Bazin.

One reason for Bazin’s success could be his ability to hold each player accountable. “He wants us to give it our all every time were on the ice, including practice,” said Sodergren. That might sound like a minor detail, but Sodergren feels that is a key to development of the players.

Fans see the accountability the players have, as well. Season ticket holder and English professor Dr. Melissa Pennell said that Bazin “builds a sense of responsibility by putting a captain on each line.” This past season, the River Hawks had 6 assistant captains on their roster.

“He really does everything he can to get the best development from each player who comes through the doors,” said Sodergren. That can be seen just by looking at the success of the seven players who have gone on to the NHL. Hellebuyck, C.J. Smith, Chad Ruhwedle and Scott Wilson are just a few. Wilson and Ruhwedel won Stanley Cups in 2016 and 2017 with the Pittsburgh Penguins.

“There’s something about his calm demeanor, even when something goes against the team, that I think helps the players stay calm in big situations,” said Pennell. This was highlighted by Sodergren. “His calm demeanor helps us in key situations because it relieves pressure on us and keeps us playing our game, instead of thinking about the other distractions,” said Sodergren.