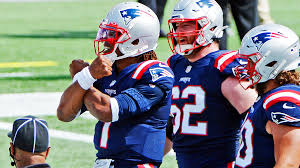 (Photo courtesy of Patriots Twitter)Cam Newton pays tribute to Chadwick Boseman, after scoring his first of two rushing touchdowns in week one.

At the start of week one of the 2020 NFL season, there was a lot of uncertainty regarding the New England Patriots. After losing star quarterback and New England icon, Tom Brady, this offseason, fans watched a new starting quarterback, Cam Newton, lead the Patriots for the first time in 20 years. Newton played his first game as a New England Patriot on Sunday, scoring two rushing touchdowns and completing 15-19 passes for 155 yards while leading the Patriots to victory over the Miami Dolphins, who took away a first-round playoff bye from the Patriots in week 17 of last season.

Newton’s ability to run the ball added a new dynamic to the New England team’s offense. The former NFL MVP has a lot to prove this season, and last Sunday’s game against the Dolphins was a step in the right direction. Patriots’ head coach, Bill Belichick, also has a lot riding on this season. The Belichick and Brady duo the past 20 NFL seasons is considered one of the greatest dynasties in sports, with 16 AFC East titles and six Super Bowl wins. Now, with Brady playing for the Tampa Bay Buccaneers, people are wondering who contributed more to the Patriots’ historic run, Brady or Belichick.

While the answer is neither black nor white, there is a lot of curiosity about how the two will perform without each other. Tampa Bay lost their season opener against the New Orleans Saints, 34-23. Brady completed 23-36 passes for 239 yards and scored two passing touchdowns. However, he threw two interceptions, one resulting in a pick-six. This is Brady’s third straight game with a pick-six if counting last year’s playoff loss against the Tennessee Titans and the week 17 loss against the Dolphins last season.

Not skipping a beat from the 2019 season, the Patriots defense appeared well-adjusted during Sunday’s game. They looked good even with two key defensive players, linebacker Dont’a Hightower and safety Patrick Chung, opting out of the 2020 season. On top of that, they lost linebackers Jamie Collins to the Detroit Lions and Kyle Van Noy to the Dolphins before the season started. Despite this, the Patriots defense forced Dolphins quarterback Ryan Fitzpatrick to throw three interceptions and let up only 11 points.

One of the three interceptions was caught by reigning NFL Defensive Player of the Year, Stephon Gilmore. Gilmore was the first player in Patriots history to win this award. Turning 30-years-old on Sept. 19, Gilmore has not missed a step and recently received a $5 million raise for the 2020 season.

The Patriots are squaring off against Russell Wilson and the Seattle Seahawks Sunday night at 8 p.m. on NBC in Seattle, a rematch of the classic Super Bowl XLIX.  This week will pose a bigger challenge for Newton and the Patriots considering the Seahawks are a stronger opponent than the Miami Dolphins and that they are coming off a 38-25 win against the Atlanta Falcons. One nod for the Patriots is that Seattle will be fan-less. However, the Seahawks are predicted by many to be one of the top few teams in the NFL this year.

The 2020 NFL season has just begun, but with Brady leaving the Patriots and the lack of fans in most stadiums, this year feels different for the followers of the beloved New England team.