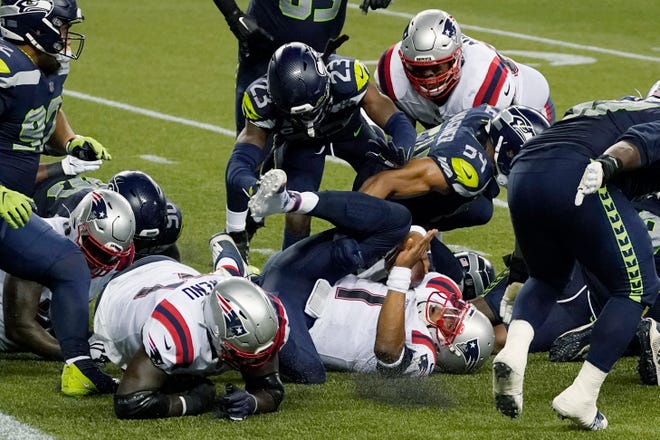 The favored Seahawks came out on top against the Patriots in last week’s Sunday night match up in Seattle. The game ended in typical Patriots versus Seahawks fashion, with a game-ending goal line play.  The Patriots battled back from a 12-point fourth quarter deficit and marched down the field in the final minutes of the fourth quarter, they came only a yard short of a game-winning touchdown as Cam Newton was stuffed on the one yard line on the game’s final play.

This was Cam Newton’s second start as quarterback for the Patriots. He had an impressive game passing, completing 30 of 44 pass attempts for 397 yards and one touchdown. He also had a strong impact on the run game with 47 yards and two touchdowns. He is currently tied with former Panthers’ teammate, running back Christian McCaffery, as this seasons leader for rushing touchdowns with four.

Patriots receiver Julian Edelman also had a memorable performance despite the loss. He had eight receptions for a career high 179 yards, proving that he can work with Newton like he did with Tom Brady.

On the defensive side, Patriots’ corner back and reigning defensive player of the year, Stephon Gilmore, had trouble stopping Seattle’s star receiver, DK Metcalf. Metcalf had four receptions, one of them, a 54-yard pass from Russell Wilson for a touchdown, all while fighting some contact from Gilmore. This was the first touchdown that Gilmore has allowed as the closest defender since the 2018 season.

Wilson, considered by many to be a front-runner for this season’s MVP, finished the game with five passing touchdowns, each going to a different receiver. This was a formidable performance against a defense that was ranked first in the 2019 season. However, this is not too surprising considering the Patriots lost five of their starting defenders entering the 2020 season.

Fans are all too familiar with Patriots Seahawks games coming down to the wire. The most notable of these was Super Bowl XLIX, when then Patriots corner back, Malcom Butler, intercepted Russell Wilson in the endzone with twenty second left. This clinched a 28-24 win for the Patriots and won them their fourth Super Bowl. Unfortunately for Patriots fans this week, the other teams’ sideline ended up celebrating.

Between that iconic Super Bowl four and a half years ago and last Sunday’s game, these two teams have faced off only one other time in 2016, with Seattle winning, 31-24 on a game ending goal line stop against the Patriots.

Coming off last week’s tough loss, the Patriots are returning to Gillette Stadium Sunday for a 1pm kickoff against the Las Vegas Raiders. The Patriots are predicted to perform more favorable in week three against the Raiders, who upset the New Orleans Saints Monday night and are undefeated. The Raiders have lost five straight games to the Patriots with their last win in 2002.  It will be Raiders’ coach Jon Gruden’s first time taking a team to Foxboro since the infamous “Tuck-Rule” game during the Patriots first Super Bowl run of this century in 2002.  It will also be a critical game for the Patriots with the looming week 4 matchup against the defending Kansas City Chiefs in Kansas City.

On a more difficult and personal note, Patriots running back, James White, was inactive on Sunday’s game because of a family tragedy. Both his mother and father were in a car accident on the day of the game which killed his father and left his mother in critical condition. There was an enormous amount of support for White on social media from NFL players, including former Patriots teammate, Tom Brady and former University of Wisconsin teammate Russell Wilson. White is not expected to play in Sunday’s game against the Raiders.