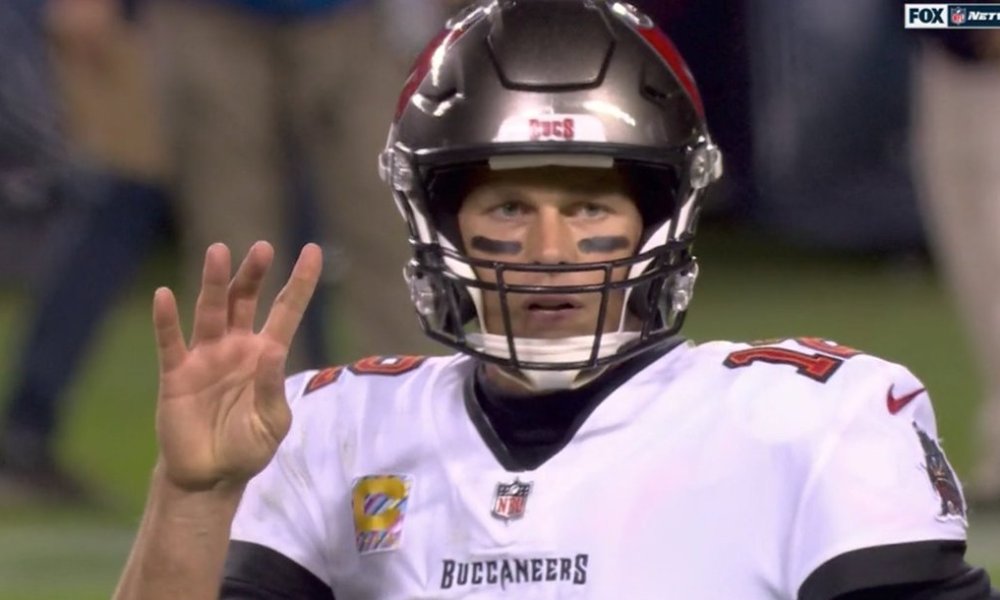 Photo courtesy of USA Today. Tom Brady signaling for fourth down after throwing incomplete pass on fourth down. Tampa Bay would lose to the Chicago Bears 20-19, Thursday October 8, 2020.

The 2-1 Tampa Bay Buccaneers took on the 1-2 Los Angeles Chargers at Raymond James Stadium in Tampa, FL in week 4 and came out on top 38-31. Tom Brady threw for 369 yards, five touchdowns and one interception that was returned for a touchdown. This was easily Brady’s best game as a Buccaneer, even while rookie QB, Justin Herbert, of the Chargers made a strong attempt to overshadow Brady’s performance.

Herbert, in his own right, had 290 passing yards, three touchdowns and one interception. Had running back Austin Ekeler not gotten hurt, it is fair to say that the Chargers could have pulled off the upset. Herbert has played well enough in his three starts to be named the starter for the Chargers for the remainder of the season.

The Buccaneers held the ball for more time, at 34:55, than the Chargers, at 25:05, in large part due to their ability to run the ball effectively down the stretch. The Buccaneers ran 73 plays compared to 50 by the Chargers. The Buccaneer running attack was led by Ronald Jones II. Jones finished the game with 111 yards on 20 carries. The Chargers as a team had 46 rushing yards, led by Herbert with 14 yards.

The Buccaneer offensive line also held up well, allowing zero sacks of Brady. Wide receiver Mike Evans hauled in seven passes for 122 yards and a touchdown for the Buccaneers as well. The Chargers faced the New Orleans Saints on Monday night at 8:15 p.m. on ESPN.

The 3-1 Buccaneers played their week 5 match-up on Thursday night in Chicago, IL at Soldier Field against the 3-1 Chicago Bears. They lost 20-19 after Brady seemed to forget that they were on fourth down, throwing a pass that was deflected away with only 33 seconds remaining.

Brady did not play as well as week four despite not throwing an interception. This was mostly because the offensive line did not look like the same players. Rookie lineman Tristan Wirfs looked like a saloon door allowing the Bears pass-rushers, mostly Khalil Mack, to reach and hit Brady a ton. Brady finished the night with 253 passing yards and only one touchdown.

Chicago kicker Cairo Santos kicked what would be the game-winning field goal late in the fourth quarter, making it 20-19. The Bears’ starting QB, and former Super Bowl MVP, Nick Foles did not play much better than Brady. Foles finished with 243 passing yards, one touchdown and an interception.

Brady now has 1,375 passing yards, 12 passing touchdowns, four interceptions and one rushing touchdown. The Buccaneers’ next three games are against teams that Brady usually performs well against. In week 6, fans will see them face off against another future Hall-of-Famer, Aaron Rodgers and the Green Bay Packers. In weeks 7 and 8, they will play the Las Vegas Raiders and the New York Giants.