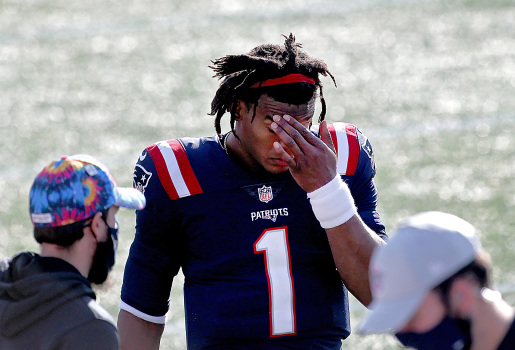 Photo Courtesy of the Boston Globe. Cam Newton after 33-6 loss at home to the San Francisco 49ers. Former Patriots quarterback Jimmy Garoppolo played one of his best games of 2020 to help his team to the win.

The New England Patriots lost again this week 33-6, to the San Francisco 49ers falling to 2-4 on the season. The Patriots’ offense was outgained 301-60 yards in the first half and trailed 23-3. This was the first time with Bill Belichick as head coach that the Patriots failed to score a first half touchdown in three consecutive games.

Cam Newton and the Patriots’ offense looked terrible throughout the game. Newton only attempted 15 passes, completing nine of them for 98 yards. He also threw three interceptions which did not help the team out at all. Newton was replaced in the fourth quarter by Jarrett Stidham. Stidham completed six of ten passes for 64 yards and an interception.

The Patriots’ defense did not look great either. They allowed former Patriots QB Jimmy Garoppolo’s 49ers’ offense 467 total yards. Garoppolo played one of his better games this season completing 20 of 25 passes for 277 yards. Garoppolo also added two interceptions, one of which was on a deep pass at the end of the first half.

For the 49ers running game, Jeff Wilson Jr. ran the ball 17 times for 112 yards and scored three touchdowns. On the third score, Wilson was seen in obvious pain rolling on the ground. It turns out he has a high ankle sprain. This is just another in the long list of running back injuries for the 49ers this season. Rookie JaMycal Hasty or Jerick McKinnon will likely start for the 49ers next week.

One of the main problems for the Patriots this season has been their inability in to pass the ball. Experts have pointed out that it seems like the wide receivers have not been able to separate from defenders to be open for Newton. N’Keal Harry left Sundays game after a hit to the head, and likely has a concussion.

As for Tom Brady and the Tampa Bay Buccaneers, they won their fifth game of the season moving them to 5-2 and keeping them ahead of the New Orleans Saints for first place in the NFC South division. Brady completed 33 of 45 passes for 369 yards and four touchdowns.

Brady entered the game with zero career regular season interceptions against the Las Vegas Raiders and did not throw one in this game. This means that they are the only team to never intercept him. Because of the scheduling rules of the NFL, unless Brady plays another four seasons, or they realign the divisions this year, which is unlikely, he will never play them again. The only team left that Brady has never played is the Patriots, which the Buccaneers will play next year.

It was clear that the Buccaneers wanted to pass the ball, running it only 25 times, 45 passes. Scotty Miller led the Buccaneers in receiving with 109 yards and a touchdown on a 33-yard pass from Brady. On that play, Brady stepped up through the offensive and defensive lineman and threw the ball into the back-left corner of the endzone. Miller hauled it in and celebrated with his teammates.

Brady and New Orleans Saints QB Drew Brees, are the top two in all-time passing touchdowns. Brady currently leads with 559, while Brees has 558.

The Patriots will take on the 5-2 Buffalo Bills next Sunday, at 1 p.m. on CBS. The Buccaneers will face off against the woeful 1-6 New York Giants Monday night on ESPN at 8:15 p.m. next week.